Of course, getting energy from sunlight, that’s pretty cool. Or is it hot? Bad jokes aside, hopefully you remember the basic process of photosynthesis from previous classes, where they might have talked about what happens in plants. The Z pathway? Anything? Do not panic – we will talk about it. Along with the other types of phototrophy that microbes use.

Phototrophy (or “light eating”) refers to the process by which energy from the sun is captured and converted into chemical energy, in the form of ATP. The term photosynthesis is more precisely used to describe organisms that both convert sunlight into ATP (the “light reaction”) but then also proceed to use the ATP to fix carbon dioxide into organic compounds (the Calvin cycle). These organisms are the photoautotrophs. In the microbial world, there are also photoheterotrophs, organisms that convert sunlight into ATP but utilize pre-made organic compounds available in the environment. The ATP could then be used for other purposes.

In order to convert energy from sunlight into ATP, organisms use light-sensitive pigments. Plants and algae utilize chlorophylls, which are used by cyanobacteria as well. Chlorophylls are green in color, due to the fact that they absorb red and blue wavelengths (≈675 nm and 430 nm) and transmit green light. The purple and green bacteria have bacteriochlorophylls, which absorb higher wavelengths (≈870 nm) than the chlorophylls, allowing different phototrophs to occupy the same environment without competing with one another.

Phototrophs can contain accessory pigments as well, such as the carotenoids and phycobiliproteins. Carotenoids, which absorb blue light (400-550 nm), are typically yellow, orange, or red in color. The phycobiliproteins can be split in two groups: phycoerythrin, which transmits a red color, and phycocyanin, which transmits a blue color. The accessory pigments can serve to expand the wavelength range of light being absorbed, allowing better utilization of light available. In addition, these pigments can serve a protective function for the organism by acting as an antioxidant. In bacteria and archaea, the phototrophic pigments are housed within invaginations of the cell membrane or within a chlorosome. Light-harvesting pigments form antennae, which funnel the light to other molecules in reaction centers, which actually perform the conversion of light energy into ATP.

For any organism, the general process of phototrophy is going to be the same. A photosystem antennae absorbs light and funnels the energy to a reaction center, specifically to a special pair of chlorophyll/bacteriochlorophyll molecules. The molecules become excited, changing to a more negative reduction potential (i.e. jumping up the electron tower). The electrons can then be passed through an electron transport chain of carriers, such as ferredoxin and cytochromes, allowing for the development of a proton motive force. The protons are brought back across the plasma membrane through ATPase, generating ATP in the process. Since the original energy from the process came from sunlight, as opposed to a chemical, the process is called photophosphorylation. If the electrons are returned to the special pair of chlorophyll/bacteriochlorophyll molecules (cyclic photophosphorylation), the process can be repeated over and over again. If the electrons are diverted elsewhere, such as for the reduction of NAD(P) (non-cyclic photophosphorylation), then an external electron source must be used to replenish the system. Purple phototrophic bacteria engage in anoxygenic phototrophy, indicating that they do not generate oxygen during the process. They have a single photosystem with bacteriochlorophyll, allowing them to use cyclic photophosphorylation as described above for the formation of ATP. But if a purple bacterium wants to grow as a photoautotroph, it will also need reducing power in the form of NAD(P)H.

The reaction center of purple bacteria (known as P870) has an E0’ of +0.5V. After being hit by a photon of light, the potential changes to -1.0V, which is insufficient to reduce NAD(P) with its E0’ of -0.32V. Thus, autotrophic purple bacteria must engage in a process known as reverse electron flow, using energy from the proton motive force to drive electrons up the electron tower. Additionally, they must find an external electron donor to replenish the electrons now diverted to NAD(P). Typically the electrons come from H2S or elemental sulfur, with various sulfur byproducts produced.

In the presence of organic compounds, the purple bacteria often exist as photoheterotrophs, utilizing cyclic photophosphorylation to generate ATP and getting their organic compounds from the environment. This eliminates the need for using reverse electron flow, an energetically unfavorable process, as well as the need for external electron donors.

Green phototrophic bacteria also engage in anoxygenic phototrophy, utilizing a single photosystem with bacteriochlorophyll for cyclic photophosphorylation in the production of ATP. However, they also use this same photosystem for generation of reducing power, by periodically drawing off electrons to NAD+. The use of reverse electron flow is unnecessary, however, since the initial carrier, ferredoxin (Fd) has a E0’ with a more negative reduction potential than NAD(P). An external electron donor is required, typically by using H2S or thiosulfate. Thus, the green bacteria operate as photoautotrophs, by alternating the use of their photosystem for ATP or NAD(P)H. 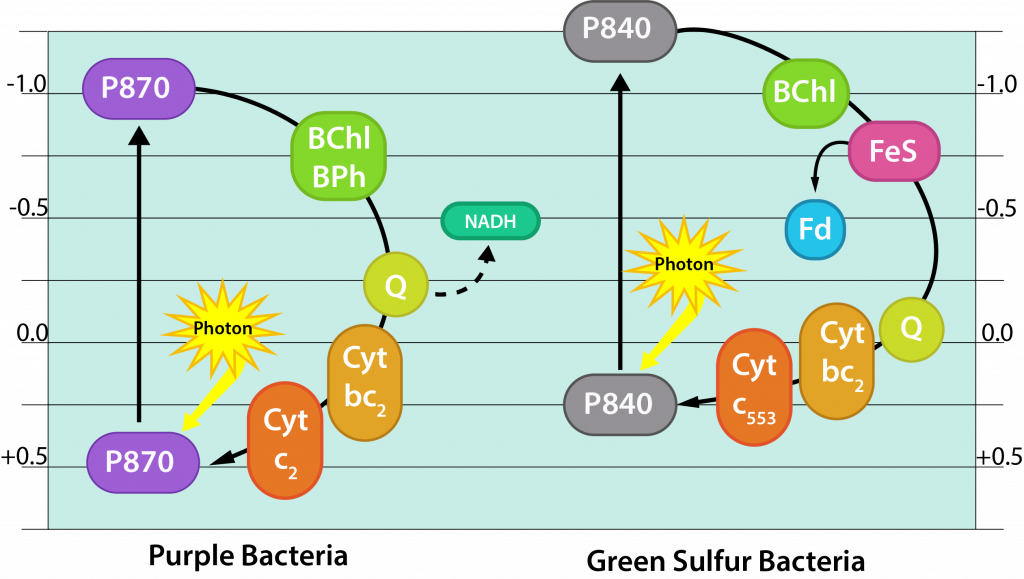 Oxygenic phototrophy is used by cyanobacteria containing chlorophyll a, with two distinct photosystems, each containing separate reaction centers. This allows for the generation of both ATP and reducing power in one process, facilitating photoautotrophic growth through the fixation of CO2. This can appropriately be referred to as photosynthesis and it is the same process used by plants, commonly referred to as the “Z pathway.”

Overview of Oxygenic Photosynthesis in Cyanobacteria.

The process is an example of noncyclic photophosphorylation, since the electrons are not returned to the original photosystem. Thus, an external electron donor is required in order to allow the process to repeat. Water, found on the right side of the redox couple O2/H2O, is normally a poor electron donor, due to its extremely positive reduction potential. But the reduction potential of P680 chlorophyll a is even more positive when not excited, allowing for water to serve as an electron donor. The hydrolysis of water leads to the evolution of oxygen, a welcome byproduct for all organisms that use aerobic respiration. It is thought that cyanobacteria are responsible for the oxygenation of Earth, allowing for the development of aerobic respiration as a form of metabolism.

There are some conditions under which cyanobacteria only use PSI, essentially performing a form of anoxygenic phototrophy, despite their possession of chlorophyll a. This occurs within the heterocysts of cyanobacteria, where oxygen inactivates the nitrogenase enzymes. Heterocysts degrade PSII, ensuring that oxygen will not be produced as a byproduct, while still allowing for the production of ATP with the remaining photosystem. One unusual form of phototrophy is used by archaea, without the use of chlorophyll or bacteriochlorophyll. Instead these organisms use a bacteriorhodopsin (more appropriately called an archaearhodopsin), a retinal molecule related to the one found in vertebrate eyes. When the rhodopsin absorbs light it undergoes a conformational change, pumping a proton across the cell membrane and leading to the development of a proton motive force, without the participation of an electron transport chain. 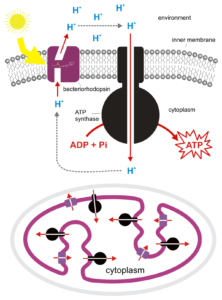