So when does the peacock extend his tail?

Peafowl are best known for the male's extravagant tail. Obviously though, a peacock cannot have his tail extended continuously. It would make it very difficult to move around. And it may be very tiring. So when does the peacock extend his tail? The peacock displays his tail as part of courtship.

Mating refers to the union of a male and female of the same species for reproduction. The relationship between mates varies by species. Adults may have many mates, or they may mate with just one individual. Mates may stay together only while mating, for an entire breeding season, or even for life.

Females are likely to be more selective than males in choosing mates. In many species, males put on courtship displays to encourage females to choose them as mates. For example, to attract a mate, a male bowerbird builds an elaborate nest decorated with hundreds of small blue objects (see Figure below). Bowerbird Decorating His Nest. A male bowerbird spends many hours collecting bits of blue glass and other small blue objects to decorate his nest. A female bowerbird inspects the nests of many males before choosing as a mate the male with the best nest.

In most species of fish, amphibians, and reptiles, parents provide no care to their offspring. In birds and mammals, on the other hand, parental care is common. Most often, the mother provides the care. However, in some species, both parents or just the father may be involved.

Parental care is generally longest and most involved in mammals. Besides feeding and protecting their offspring, parents may teach their offspring skills they will need to survive on their own. For example, meerkat adults teach their pups how to eat scorpions. They show the pups how to safely handle the poisonous insects and how to remove the stingers. This mother killdeer is pretending she has a broken wing. She is trying to attract a predator’s attention in order to protect her chicks. This behavior puts her at risk of harm. How can it increase her fitness?

Some species of animals are territorial. This means that they defend their area. The area they defend usually contains their nest and enough food for themselves and their offspring. A species is more likely to be territorial if there is not very much food in their area. Animals generally do not defend their territory by fighting. Instead, they are more likely to use display behavior. The behavior tells other animals to stay away. It gets the message across without the need for fighting. Display behavior is generally safer and uses less energy than fighting. Male gorillas use display behavior to defend their territory. They pound on their chests and thump the ground with their hands to warn other male gorillas to keep away from their area. The robin displays his red breast to warn other robins to stay away (Figure below). 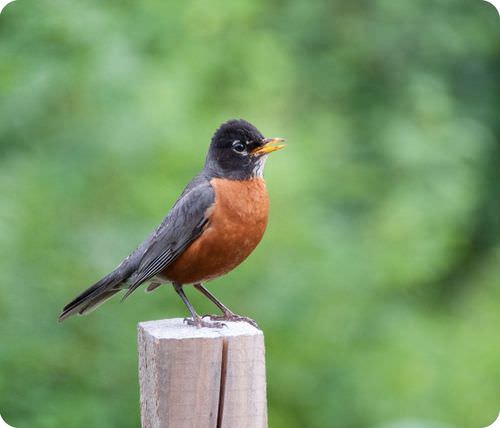 The red breast of this male robin is easy to see. The robin displays his bright red chest to defend his territory. It warns other robins to keep out of his area.