Renewable or nonrenewable, what's the difference?

That's like asking the difference between having an endless supply and having a limited supply. Will this planet eventually run out of oil? Probably. So oil is a nonrenewable resource.

Renewable resources can be replenished by natural processes as quickly as humans use them. Examples include sunlight and wind. They are in no danger of being used up (seeFigure below). Metals and other minerals are renewable too. They are not destroyed when they are used and can be recycled. 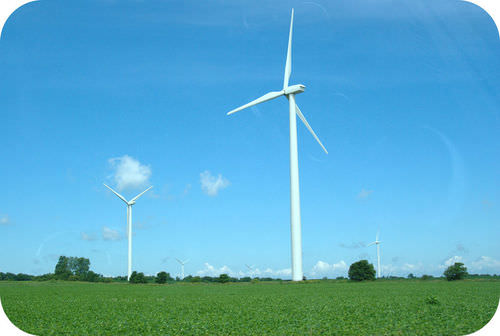 Wind is a renewable resource. Wind turbines like this one harness just a tiny fraction of wind energy.

Living things are considered to be renewable. This is because they can reproduce to replace themselves. However, they can be over-used or misused to the point of extinction. To be truly renewable, they must be used sustainably. Sustainable use is the use of resources in a way that meets the needs of the present and also preserves the resources for future generations.

Nonrenewable resources are natural resources that exist in fixed amounts and can be used up. Examples include fossil fuels such as petroleum, coal, and natural gas. These fuels formed from the remains of plants over hundreds of millions of years. We are using them up far faster than they could ever be replaced. At current rates of use, petroleum will be used up in just a few decades and coal in less than 300 years. Nuclear power is also considered to be a nonrenewable resource because it uses up uranium, which will sooner or later run out. It also produces harmful wastes that are difficult to dispose of safely. Gasoline is made from crude oil. The crude oil pumped out of the ground is a black liquid called petroleum, which is a nonrenewable resource. Coal is another nonrenewable resource.

Scientists at the Massachusetts of Technology are turning trash into coal, which can readily be used to heat homes and cook food in developing countries. This coal burns cleaner than that from fossil fuels. It also save a tremendous amount of energy.