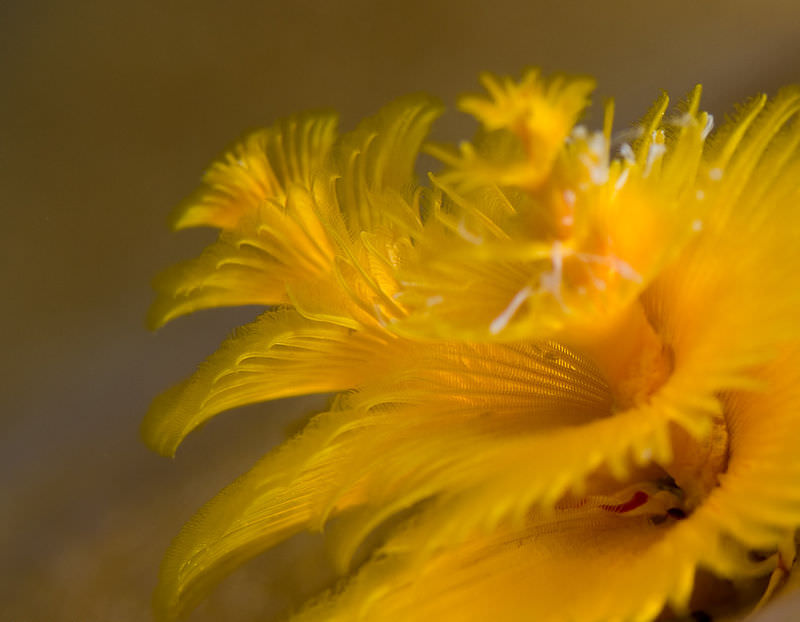 What is this? Plant or animal?

Aquatic organisms generally fall into three broad groups: plankton, nekton, and benthos. They vary in how they move and where they live. Anglerfish. This anglerfish lives between 1000 and 4000 meters below sea level. No sunlight penetrates to this depth. The rod-like structure on its face has a glow-in-the-dark tip. It is covered with microorganisms that give off their own light. The fish wiggles the structure like a worm to attract prey. In the darkness, only the rod-like worm is visible.

Oceans cover more than 70 percent of our planet, yet they are some of the least explored regions on Earth. Who better to unlock the mysteries of the ocean than marine animals themselves? Marine scientists have been tagging and tracking sharks, leatherback turtles, and other sea life to learn more about marine ecosystems. Through the Tagging of Pacific Predators program (TOPP), scientists hope to assess and explain the migration routes, ecosystems, and diversity of our oceans’ species.

Beginning in 2000, scientists from the National Oceanic and Atmospheric Administration, Stanford University, and the University of California, Santa Cruz combined to form TOPP. As part of TOPP, researchers attach satellite tags to elephant seals, white sharks, giant leatherback turtles, bluefin tuna, swordfish, and other marine animals. The tags collect information, such as how deep each animal dives, the levels of ambient light (to help determine an animal’s location), and interior and exterior body temperature. Some tags also collect information about the temperature, salinity, and depth of the water surrounding an animal to help scientists identify ocean currents. The tags send the data to a satellite, which in turn sends the data the scientists. They use this information to create maps of migration patterns and discover new information about different marine ecosystems. The information collected by TOPP offers rare insights into the lives of marine animals. Without TOPP, that information would otherwise remain unknown. With TOPP, scientists are developing a working knowledge of the particular migration routes animals take, as well as the locations of popular breeding grounds and the environmental dangers faced by different species. TOPP has shed light on how we can better protect the leatherback turtle and other endangered species.