Prehistoric underwater life exploded with amazing new creatures during the Paleozoic Era. Evolution allowed life to take many diverse forms, eventually developing the necessary adaptations to move from the ocean onto land.

Life During the Paleozoic

The Paleozoic Era is literally the era of “old life.” It lasted from 544 to 245 million years ago and is divided into six periods. Major events in each period of the Paleozoic Era are described in Figure below. The era began with a spectacular burst of new life. This is called the Cambrian explosion. The era ended with the biggest mass extinction the world had ever seen. This is known as the Permian extinction. At the following link, you can watch a video about these and other events of the Paleozoic Era: http://www.youtube.com/watch?v=Bf2rrRmconU. 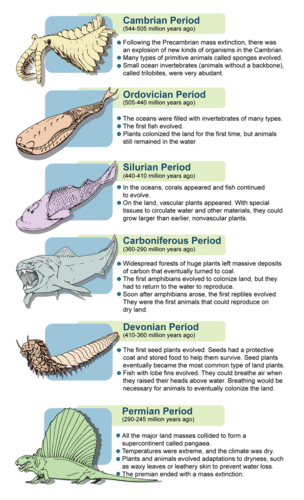 The Cambrian Period: Following the Precambrian mass extinction, there was an explosion of new kinds of organisms in the Cambrian Period (544–505 million years ago). Many types of primitive animals called sponges evolved. Small ocean invertebrates called trilobites became abundant. 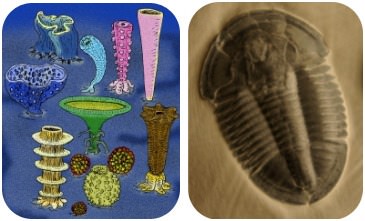 Two representatives of more than fifty modern animal phyla from the Cambrian explosion are reef-building sponges (left) and early arthropods known as trilobites (right). Both were abundant during the Cambrian and later became extinct; however, the phyla they represent persist to this day.

Cooksonia, a branching vascular plant with sporangia at the tips of each branch. Cooksonia fossils measure just centimeters in height and date from the Silurian period.

The Devonian Period: During the Devonian Period (410–360 million years ago), the first seed plants evolved. Seeds have a protective coat and stored food to help these plants survive. Seed plants eventually became the most common type of land plants. In the oceans, fish with lobe fins evolved. They could breathe air when they raised their heads above water. Breathing would be necessary for animals to eventually colonize the land. The Carboniferous Period: Next, during the Carboniferous Period (360–290 million years ago), widespread forests of huge plants left massive deposits of carbon that eventually turned to coal. The first amphibians evolved to move out of the water and colonize land, but they had to return to the water to reproduce. Soon after amphibians arose, the first reptiles evolved. They were the first animals that could reproduce on dry land.

The Permian Period: During the Permian Period (290–245 million years ago), all the major land masses collided to form a supercontinent called Pangaea. Temperatures were extreme, and the climate was dry. Plants and animals evolved adaptations to dryness, such as waxy leaves or leathery skin to prevent water loss. The Permian Period ended with a mass extinction. The supercontinent Pangaea encompassed all of today’s continents in a single land mass. This configuration limited shallow coastal areas which harbor marine species, and may have contributed to the dramatic event which ended the Permian - the most massive extinction ever recorded.

In the mass extinction that ended the Permian, the majority of species went extinct. Many hypotheses have been offered to explain why this mass extinction occurred. These include huge meteorites striking Earth and enormous volcanoes spewing ashes and gases into the atmosphere. Both could have darkened the skies with dust for many months. This, in turn, would have shut down photosynthesis and cooled the planet.

Despite the great loss of life, there was light at the end of the tunnel. The Permian extinction paved the way for another burst of new life at the start of the following Mesozoic Era. This included the evolution of the dinosaurs.