Is it possible to live in temperatures over 175°F?

It is if you're a Pompeii worm. The Pompeii worm, the most heat-tolerant animal on Earth, lives in the deep ocean at super-heated hydrothermal vents. Covering this deep-sea worm's back is a fleece of bacteria. These microbes contain all the genes necessary for life in extreme environments.

Why do bacteria that live deep below the ocean’s surface rely on chemical compounds instead of sunlight for energy to make food?

Most autotrophs make food by photosynthesis, but this isn’t the only way that autotrophs produce food. Some bacteria make food by another process, which uses chemical energy instead of light energy. This process is called chemosynthesis. In chemosynthesis, one or more carbon molecules (usually carbon dioxide or methane, CH4) and nutrients is converted into organic matter, using the oxidation of inorganic molecules (such as hydrogen gas, hydrogen sulfide (H2S) or ammonia (NH3)) or methane as a source of energy, rather than sunlight. In hydrogen sulfide chemosynthesis, in the presence of carbon dioxide and oxygen,carbohydrates (CH2O) can be produced:

Many organisms that use chemosynthesis are extremophiles, living in harsh conditions, such as in the absence of sunlight and a wide range of water temperatures, some approaching the boiling point. Some chemosynthetic bacteria live around deep-ocean vents known as “black smokers.” Compounds such as hydrogen sulfide, which flow out of the vents from Earth’s interior, are used by the bacteria for energy to make food. Consumers that depend on these bacteria to produce food for them include giant tubeworms, like those pictured in Figure below. These organisms are known as chemoautotrophs. Many chemosynthetic microorganisms are consumed by other organisms in the ocean, and symbiotic associations between these organisms and respiring heterotrophs are quite common. 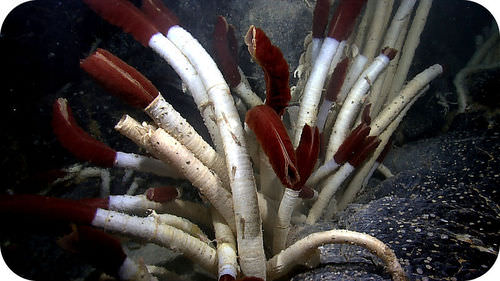 Tubeworms deep in the Galapagos Rift get their energy from chemosynthetic bacteria. Tubeworms have no mouth, eyes or stomach. Their survival depends on a symbiotic relationship with the billions of bacteria that live inside them. These bacteria convert the chemicals that shoot out of the hydrothermal vents into food for the worm.