If stretched to its full length, the DNA molecule of the largest human chromosome would be 85mm. Yet during mitosis and meiosis, this DNA molecule is compacted into a chromosome approximately 5µm long. Although this compaction makes it easier to transport DNA within a dividing cell, it also makes DNA less accessible for other cellular functions such as DNA synthesis and transcription. Thus, chromosomes vary in how tightly DNA is packaged, depending on the stage of the cell cycle and also depending on the level of gene activity required in any particular region of the chromosome.

There are several different levels of structural organization in eukaryotic chromosomes, with each successive level contributing to the further compaction of DNA (Figure 2.2). For more loosely compacted DNA, only the first few levels of organization may apply. Each level involves a specific set of proteins that associate with the DNA to compact it. First, proteins called the core histones act as spool around which DNA is coiled twice to form a structure called the nucleosome. Nucleosomes are formed at regular intervals along the DNA strand, giving the molecule the appearance of “beads on a string”. At the next level of organization, histone H1 helps to compact the DNA strand and its nucleosomes into a 30nm fibre. Subsequent levels of organization involve the addition of scaffold proteins that wind the 30nm fibre into coils, which are in turn wound around other scaffold proteins.

Figure 2.2: Successive stages of chromosome compaction depend on the introduction of additional proteins. (Wikipedia-R. Wheeler-GFDL)

Chromosomes stain with some types of dyes, which is how they got their name (chromosome means “colored body”). Certain dyes stain some regions along a chromosome more intensely than others, giving some chromosomes a banded appearance. The material that makes up chromosomes, which we now know to be proteins and DNA, is called chromatin. Classically, there are two major types of chromatin, but these are more the ends of a continous and varied spectrum. Euchromatin is more loosely packed, and tends to contain genes that are being transcribed, when compared to the more densely compacted heterochromatin, which is rich in repetitive sequences and tends not to be transcribed. Heterochromatin sequences include short, highly-repetitive sequences called satellite DNA, which acquired their name because their bouyant density is distictly different from the main band of DNA following ultracentrifugation.

It is essential to describe the similarity between chromosomes using appropriate terminology (Fig 2.4). Homologous chromosomes are typically pairs of similar, but non-identical, chromosomes in which one member of the pair comes from the male parent, and the other comes from the female parent. Homologs contain the same gene loci but not necessarily the same alleles. Non-homologous chromosomes contain different gene loci, and are usually distinguishable based on cytological features such as length, centromere position, and banding patterns.

An unreplicated chromosomes can undergo replication, to produce a replicated chromosome that has two sister chromatids, which are physically connected to each other at the centromere and remain joined until cell division. Because a pair of sister chromatids is produced by the replication of a single DNA molecule, their sequences are essentially identical (same alleles), differing only because of DNA replication errors. On the other hand, non-sister chromatids come from two separate, but homologous chromosomes, and therefore usually contain the same gene loci in the same order, but do not necessarily have identical DNA sequences (allelic differences).

The decondensed chromosomes are not randomly arranged in within the interphase nucleus. They often have specific locations within the nucleus and relative to one another (Figure 2.5) Figure 2.5: Top: FISH (Fluorescence in situ hybridization) labeling of all 24 different human chromosomes (1 - ­22, X, and Y) in a fibroblast nucleus, each with a different combination of in total seven fluorochromes. Bottom: False color representation of all chromosome territories visible in this mid-section after computer classification. (BMC-Unknown-pending)

DNA replication in both prokaryotes and eukaryotes begins at an Origin of Replication (Ori). Origins are specific sequences on specific positions on the chromosome. In E. coli, the OriC origin is ~245 bp in size. Chromosome replication begins with the binding of the DnaA initiator protein to an AT-rich 9-mer in OriC and melts the two strands. Then DnaC loader protein helps DnaB helicase protein extend the single stranded regions such that the DnaG primase can initiate the synthesis of an RNA primer, from which the DNA polymerases can begin DNA synthesis at the two replication forks. The forks continue in opposite directions until they meet another fork or the end of the chromosome (Figure 2.7). 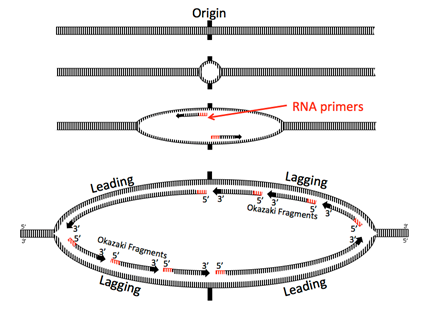 Figure 2.7: An origin of replication. The sequence specific DNA duplex is melted then the primase synthesizes RNA primers from which bidirectional DNA replication begins as the two replication forks head off in opposite directions. The leading and lagging strands are shown along with Okazaki fragments. Note the 5’ and 3’ orientation of all strands. (Original-Locke-CC:AN)

The ends of linear chromosomes present a problem – at each end one strand cannot be completely replicated because there is no primer to extend. Although the loss of such a small sequence would not be a problem, the continued rounds of replication would result in the continued loss of sequence from the chromosome end to a point were it would begin to loose essential gene sequences. Thus, this DNA must be replicated. Most eukaryotes solve the problem of synthesizing this unreplicated DNA with a specialized DNA polymerase called telomerase, in combination with a regular polymerase. Telomerases are RNA-directed DNA polymerases. They are a riboprotein, as they are composed of both protein and RNA. As Figure 2.6b shows, these enzymes contain a small piece of RNA that serves as a portable and reusable template from which the complementary DNA is synthesized. The RNA in human telomerases uses the sequence 3-AAUCCC-5' as the template, and thus our telomere DNA has the complementary sequence 5'-TTAGGG-3' repeated over and over 1000’s of times. After the telomerase has made the first strand a primase synthesizes an RNA primer and a regular DNA polymerase can then make a complementary strand so that the telomere DNA will ultimately be double stranded to the original length (Figure 2.8). Note: the number of repeats, and thus the size of the telomere, is not set. It fluctuates after each round of the cell cycle. Because there are many repeats at the end, this fluctuation maintains a length buffer – sometimes it’s longer, sometimes it’s shorter – but the average length will be maintained over the generations of cell replication. In the absence of telomerase, as is the case in human somatic cells, repeated cell division leads to the “Hayflick limit”, where the telomeres shorten to a critical limit and then the cells enter a senescence phase of non-growth. The activation of telomerase expression permits a cell and its descendants to become immortal and bypass the Hayflick limit. This happens in cancer cells, which can form tumours as well as in cells in culture, such as HeLa cells, which can be propagated essentially indefinitely. HeLa cells have been kept in culture since 1951.

In prokaryotes, with a small, simple, circular chromosome, only one origin of replication is needed to replicate the whole genome. For example, E. coli has a ~4.5 Mb genome (chromosome) that can be duplicated in ~40 minutes assuming a single origin, bi-directional replication, and a speed of ~1000 bases/second/fork for the polymerase. Figure 2.9: Part of a eukaryote chromosome showing multiple Origins (1, 2, 3) of Replication, each defining a replicon (1, 2, 3). Replication may start at different times in S-phase. Here #1 and #2 begin first then #3. As the replication forks proceed bi-directionally, they create what are referred to as “replication bubbles” that meet and form larger bubbles. The end result is two semi-conservatively replicated duplex DNA strands. (Original-Locke-CC:AN)