Root is a latest evolutionary innovation in the vegetative plant anatomy. Many “primitive” plants (all mosses and even some ferns like Psilotum) do not have roots; some flowering water plants like the> rootless duckweed (Wolffia) or the coontail (Ceratophyllum) have also reduced their roots. However, large homoiohydric plants need the constant supply of water and minerals, and this evolutionary challenge was responded with appearance of the root system.

The Root in an axial organ of plant with geotropic growth. One of root functions is to supply anchorage of the plant body in soil or on various surfaces. Other functions include water and mineral absorption and transport, food storage, and communication with other plants.

Morphology of the Root 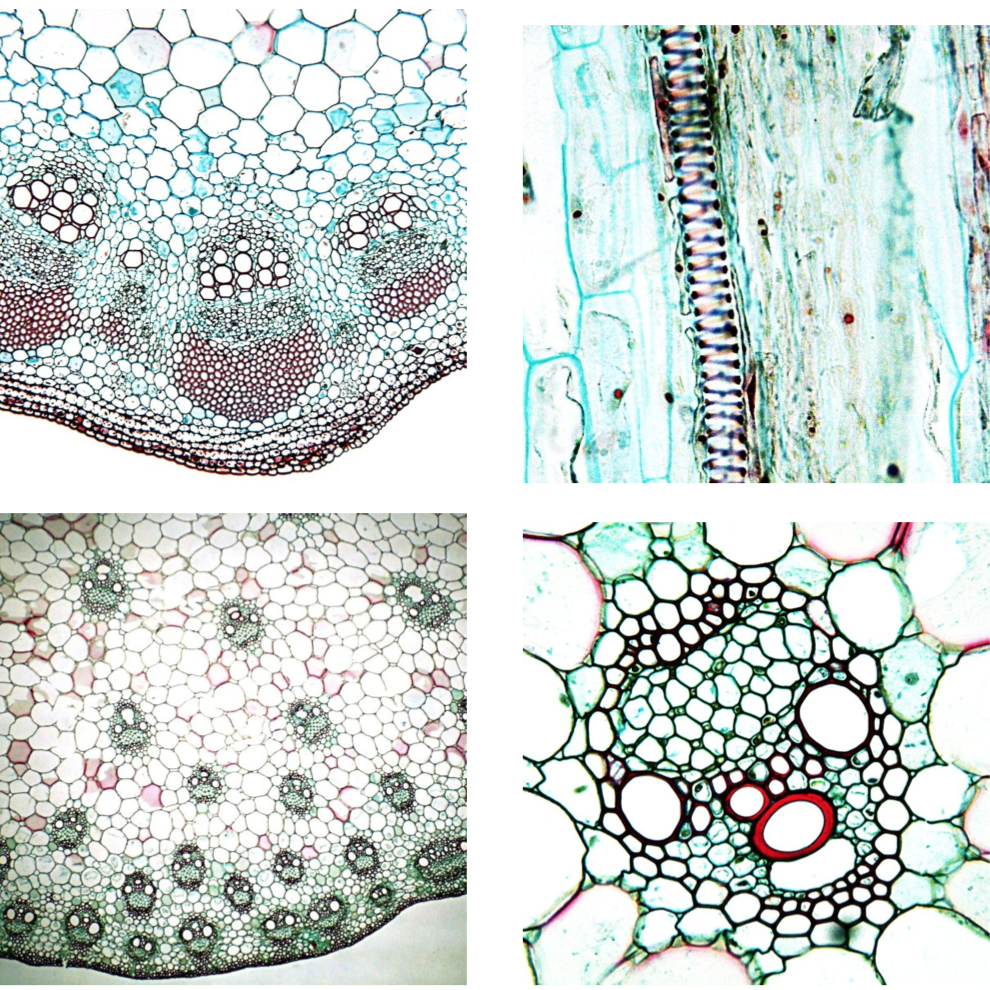 Roots employ many different modifications which help to protect, interact and storage. For example, roots of parasitic plants are modified into haustoria which sink themselves into the vascular tissue of a host plant and live off of the host plant’s water and nutrients.

Roots of mangroves (plants growing in ocean coastal swamps) are frequently modified into supportive aerial roots (“legs”). Since these swamp plants need oxygen to allow cell respiration in underground parts, there are pneumatophores, specialized roots which grow upward (!) and passively catch the air via multiple pores. Plants which grow on sand (psammophytes, see above) have another problem: their substrate constantly disappears. To avoid this, plants developed contractile roots which may shorten and pull plant body deeper into the sand.

Some orchid roots are green and photosynthetic (Figure \(\PageIndex{3}\))! However, as a rule, root is the heterotrophic organ, because root cells have no access to the light. Mycorrhiza is a root modification started when fungus penetrates root and makes it more efficient in mineral and water absorption: it will exchange these for organic compounds. In addition to mycorrhizal fungi, endophytic fungi inhabit other plant organs and tissues.

Anatomy of the Root

On the longitudinal section of young growing root, there are different horizontal layers, zones: root cap covering division zone, elongation zone, absorption zone, and maturation zone (Figure \(\PageIndex{4}\)). The root cap protects the root apical meristem (RAM), which is a group of small regularly shaped cells. A small, centrally located part of the RAM is the quiescent center where initial cells divide and produce all other cells of root. Root cap is responsible for the geotropic growth, if the root tip comes into contact with a barrier, root cap will feel it and will grow on a different direction to go around it.

The elongation zone is where the cells start to elongate, giving it length. The absorption zone where the rhizodermis tissue (root hairs) develops and where water and nutrients are absorbed and brought into the plant. Within the maturation zone, root hairs degrade, many cells start to acquire secondary walls and lateral roots develop (Figure \(\PageIndex{4}\)). On the cross-section of the root made within absorption zone, the first tissue is the rhizodermis, which is also known as the root epidermis, then cortex, which segregates external exodermis and internal endodermis one-cellular layers, and vascular cylinder (Figure \(\PageIndex{5}\) ). Typically, roots have no pith. In some cases (for example, in orchids), cortex may give multi-layered velamen (see above), another absorption tissue.

Vascular cylinder is located in the center of the root, it contains the pericycle which is made of mostly parenchyma and bordering endodermis. Pericycle cells may be used for storage, they contribute to the vascular cambium, and initiate the development of lateral roots. Consequently, lateral roots are developing endogenously and break tissues located outside, like aliens in the famous movie. Root phloem is arranged in 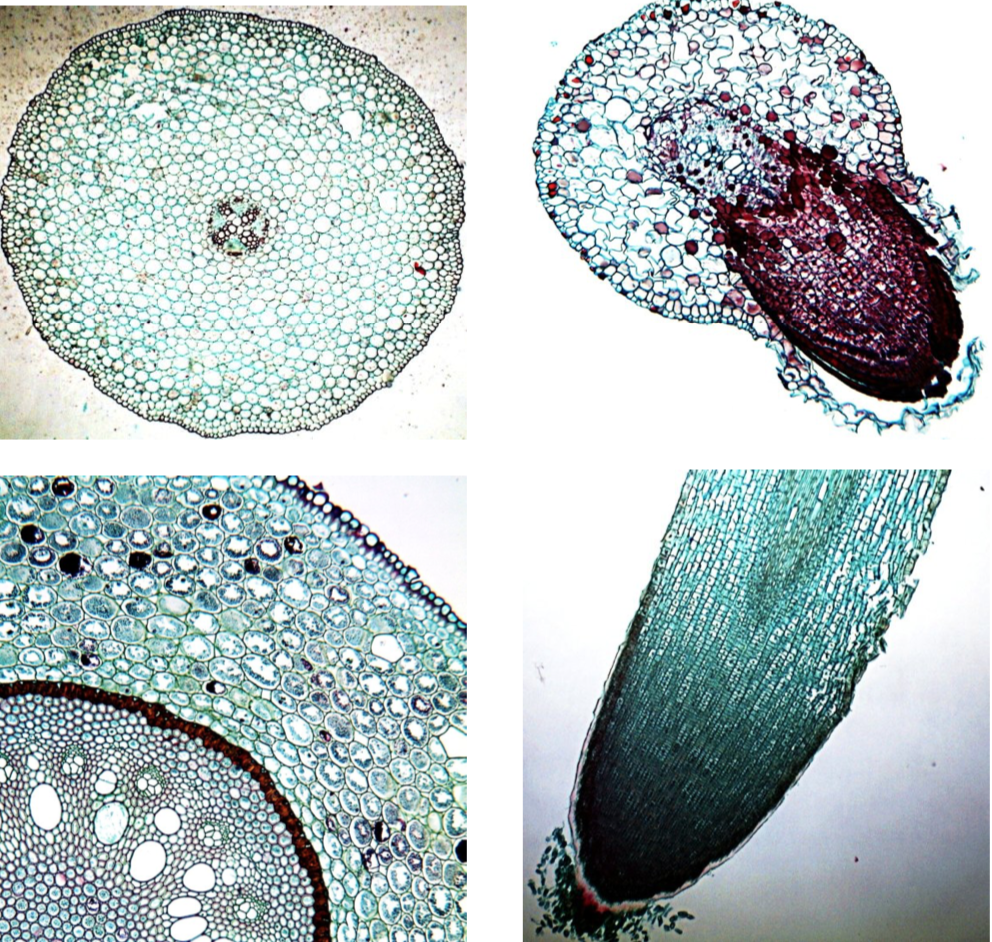 several strands whereas xylem typically has a radial, sometimes star-shaped structure with few rays (Figure \(\PageIndex{6}\)). In the last case, phloem strands are located between rays of xylem.

Figure \(\PageIndex{6}\) Anatomy of root: cross-section through the maturation zone.

Root tissues develop in the way similar to stem, RAM gave rise to ground meristem, procambium, and the protoderm, which in turn make all primary tissues mentioned above. Later, pericycle develops into lateral roots or the vascular cambium which in turn produces into the secondary xylem and phloem. The secondary root is similar to secondary stem (see below).

Water and Sugar Transportation in Plants

Plants need water to supply photosynthesis (the oxygen is from water!), to cool down via transpiration, and to utilize diluted microelements. Dead velamen (paper-like), rhizoids (hair-like), and living rhizodermis (rhizoderm) are responsible for water uptake.

In rhizodermis, root hairs increase the surface area where the plant has to absorb the nutrients and water. To take water, hair cells increase concentration of organic chemicals (the process which needs ATP) and then use osmosis. There are two ways that water transport may go: apoplastic or symplastic. Apoplastic transport moves water through the cell walls of cortex: from the rhizodermis to the endodermis. Endodermis cell walls bear Casparian strips (rich of hydrophobic suberin and lignin) which prevent the water from passing through the cell wall and force symplastic transport (Figure \(\PageIndex{7}\)) through cytoplasms and plasmodesmata. Symplastic transport there is directed to the center of root only and requires ATP to be spend. Figure \(\PageIndex{5}\) The origin of root pressure: water comes into vascular cylinder but cannot go back because of endoderm (brown line). The only possible way is to go up.

By pumping water inside vascular cylinder and not letting it back, endodermis cells create the root pressurepressure force made solely by roots (Figure \(\PageIndex{8}\)). It is easy to observe on tall herbaceous plants cut near the ground: drops of water will immediately appear on the cutting. Inside tracheary elements of xylem, water moves with the root pressure, capillary force and the sucking pressure of transpiration. The latter means that water column does not want to break and if water disappears from the top (stomata on leaves), it will move water inside plant. The main direction of water movement is from roots to leaves, i.e. upwards.

Products of photosynthesis (sugars) are moving inside living cells of phloem; these cells (sieve tubes) use only symplastic transport to distribute glucose and other organic compounds among all organs of plants. In fact, phloem transports these components in all directions: to the flowers (usually upwards), and at the same time to the roots (usually downwards).