Botany is the scientific study of plants and plant-like organisms. It helps us understand why plants are so vitally important to the world. Plants start the majority of food and energy chains, they provide us with oxygen, food and medicine. Plants can be divided into two groups: plants\(_1\) and plants\(_2\). Plants\(_1\) contain all photosynthetic organisms which use light, \(\ce{H2O}\), and \(\ce{CO2}\) to make organic compounds and \(\ce{O2}\). Plants\(_1\) are defined ecologically (based on their role in nature). Some plants\(_1\) can be bacteria or even animals! One example of this a green slug, Elysia chlorotica (see Figure \(\PageIndex{1}\)). Green slugs collect chloroplasts from algae and use them for their entire life as food producers. Therefore, green slugs are both animals and plants\(_1\). Plants\(_2\) are all organisms from Vegetabilia kingdom. Normally, plants\(_2\) are green organisms with a stem and leaves. We can define them also as multi-tissued, terrestrial, and primarily photosynthetic eukaryotes. This definition is taxonomical (based on evolution).

It is possible for the organism to be plant\(_2\) but not plant\(_1\) (Figure \(\PageIndex{2}\)). Those who fall into that category, are fully parasitic plants (mycoparasites like Pterospora, root parasites like Hydnora, stem parasites like Cuscuta, and internal parasites like Pilostyles) which do not practice photosynthesis but have tissues, terrestrial lifestyle and originated from photosynthetic ancestors. Plants may be understood on several levels of organization: (from top to bottom) (a) ecosystems or taxa, (b) populations, (c) organisms, (d) organs, (e) tissues, (f) cells, (g) organelles, and (h) molecules (Figure \(\PageIndex{3}\)). Botany is considered to be a “slice science” because it covers multiple levels of organization.

Taxonomy, systematics and classification are terms with similar meanings; they are all about the overwhelming diversity of living organisms, for there are more than 2,000,000 species (and 300,000 of them belong to plants\(_2\)). Phylogenetics is a more fashionable term; it emphasizes the evolutionary history (phylogeny) of taxonomic groups (taxa). This taxonomic organization is hierarchical. Most scientists accept seven main levels of taxonomy (ranks): the highest is kingdom, followed by phylum, class, order, family, genus, and lastly, species. The highest rank, kingdoms are easy to understand as the pyramid of life (Figure \(\PageIndex{4}\)) which is divided into four levels—kingdoms. At the bottom is Monera, which consists of prokaryotes (Bacteria and Archaea). This is the first level of life: Monera have simplest cells without nucleus. The next level is Protista. These are eukaryotes (nuclear cells) without tissues; some examples are algae and fungi. The final level consists of two groups: Vegetabilia and Animalia. They both have tissues but have obtained them for completely different purposes. Animals have tissues to hunt and digest, while plants have tissues mainly to survive on land. Viri which are mentioned sideways, are not living things but merely pieces of DNA or RNA which “went astray” out of cells of living organisms of all four kingdoms. Despite of being non-living, viruses are capable of evolution.

Ranks are used to compare taxonomic groups (taxa) from different major groups. No precise definitions are available for particular ranks, but it is believed that they are associated with the time of divergence (separation) between taxa. In addition to seven ranks mentioned above plant taxonomy uses intermediate ranks like subfamily, subclass or superorder—when taxonomic structure is too complicated.

It is frequent when one species has several geographical races without clear borders between them. The example might be the stinging nettle, Urtica dioica. In North America, many nettles have narrower leaves and are less stinging than in Eurasia. However, there are many intermediate forms between these races. To reflect this, taxonomists introduced two subspecies: in this case, Urtica diuica subsp. dioica (“Eurasian”) and U. 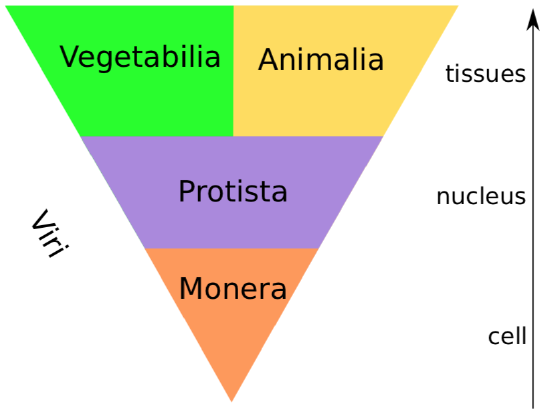 dioica subsp. gracilis (“North American”). Another frequently used under-species category which is cultivar. Cultivars are frequently used in gardening. For example, many roses in cultivation belong to different cultivars of Rosa banksiae, and yellow roses are often Rosa banksiae cv. ‘Lutea’ where the last part of name is for the cultivar.

Names of species are binomials which consist of the name of genus and species epithet:

If one does not know the exact species, “sp.” shortcut is used instead of epithet, and “spp.” is used as a shortcut for multiple unknown species. It is required to use slanted font when one prints a name of species or genus. All scientific names are capitalized, but the second word in a species name (species epithet) always starts from lower case letter. It is a well-known fact that some species have a hybrid origin, and in these cases, botanists use a multiplication sign (\(\times\)). For example, common plum (Prunus \(\times\)domestica) is a hybrid between blackthorn and cherry plum: Prunus spinosa \(\times\) Prunus cerasifera.

The group of plants or animals must have one and only one name. Ideally, the name should be a stable ID for all occasions. But since biology is a “science of exceptions”, some plant families are allowed to bear two names. As an example, legumes (Leguminosae) are frequently named “Fabaceae”, and grasses (Gramineae) have the second name “Poaceae”.

Throughout the long history of taxonomy, too many names were given to the same taxa. At the moment, we have almost 20,000,000 names to describe 2,000,000 species. These 18,000,000 “excess names” are synonyms which should not be used in science. To regulate the use of names, nomenclature codes were created. These codes specify, for example, the rule of priority: when two names are given for the same group, only earlier name is valid. Consequently, it is recommended to list the author and the year of description along with a name: “Homo sapiens L. 1758”, which means that founder of taxonomy, Carolus Linnaeus (“L.” shortcut) described this species in 1758.

Another important concept of nomenclature is the nomenclature type. Practically, this means that every species name must be associated with the physical museum specimen. In botany, these museums are collections of dried and pressed plants, called herbaria. Type specimens are of immense importance because there are no labels in nature, and only these specimens will “tell” about real plants or animals associated with particular names.

Names of taxa higher than species also have nomenclature types, but in these cases they are other names, not specimens. This example may clarify the use on nomenclature types. Initially, oleaster family (Elaeagnaceae) contained two genera, Elaeagnus (oleaster) and Hippophaë (sea-buckthorn). The second genus included Hippophaë rhamnoides (Siberian sea-buckthorn, type species) and Hippophaë canadensis (North American plant). Thomas Nuttall decided to split sea-buckthorns in two genera. Since one of them contains Hippophaë rhamnoides, the type species, it should keep the name Hippophaë. The second genus can be named arbitrarily. Nuttall gave it name “Shepherdia”. As a result, the species which had name Hippohaë canadensis L., became Shepherdia canadensis (L.) Nutt.

Plant taxonomy is a science. That means that our understanding of plant groups will always change. It also means that there always are different competing opinions, the taxonomic hypotheses which describe plant diversity in different ways. As a result, some groups of plants could be accepted in a broad sense, including as many subgroups as possible. For example, there might be an opinion of Homo sapiens s.l. (sensu lato = wide sense) including not only contemporary humans but also Neanderthal men. As a contrast, other opinions may accept groups in a strict sense, and Homo sapiens s.str. (sensu stricto = strict sense) includes only contemporary humans.