Molecular cloning was the first method available to isolate a gene of interest and make many copies of it to obtain sufficient amounts of the DNA to study. Today, there is a faster and easier way to obtain large amounts of a DNA sequence of interest -the polymerase chain reaction (PCR). PCR allows one to use the power of DNA replication to amplify DNA enormously in a short period of time. As you know, cells replicate their DNA before they divide, and in doing so, double the amount of the cell’s DNA. PCR essentially mimics cellular DNA replication in the test tube, repeatedly copying the target DNA over and over, to produce large quantities of the desired DNA.

In contrast to cellular DNA replication, which amplifies all of a cell’s DNA during a replication cycle, PCR does targeted amplification to replicate only a segment of DNA bounded by the two primers that determine where DNA polymerase begins replication. Figure 8.34 illustrates the process. Each cycle of PCR involves three steps, denaturing, annealing and extension, each of which occurs at a different temperature. Since PCR is, basically, replication of DNA in a test-tube, all the usual ingredients needed for DNA replication are required:​

The primers are short synthetic single-stranded DNA molecules whose sequence matches a region flanking the target sequence. It is possible to chemically synthesize DNA molecules of any given base sequence, to use as primers. To make primers of the correct sequence that will bind to the template DNA, it is necessary to know a little bit of the template sequence on either side of the region of DNA to be amplified. DNA polymerases and dNTPs are commercially available from biotechnology supply companies. 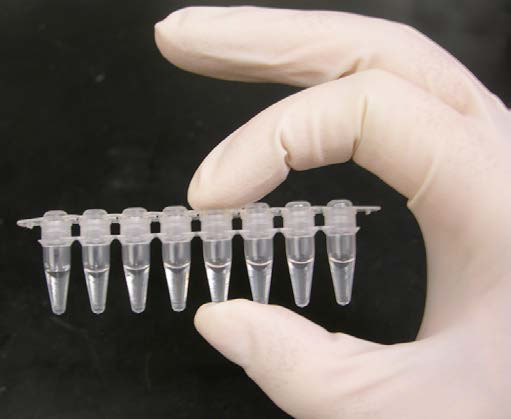 First, all of the reagents are mixed together. Primers are present in millions of fold excess over the template. This is important because each newly made DNA strand starts from a primer. The first step of the process involves separating the strands of the target DNA by heating to near boiling.

Next, the solution is cooled to a temperature that favors complementary DNA sequences finding each other and making base pairs, a process called annealing. Since the primers are present in great excess, the complementary sequences they target are readily found and base-paired to the primers. These primers direct the synthesis of DNA. Only where a primer anneals to a DNA strand will replication occur, since DNA polymerases require a primer to begin synthesis of a new strand. 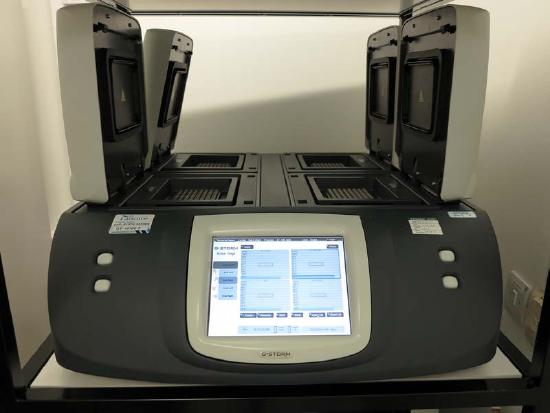 In the third step in the process, the DNA polymerase replicates DNA by extension from the 3’ end of the primer, making a new DNA strand. At the end of the first cycle, there are twice as many DNA molecules, just as in cellular replication. But in PCR, the process is repeated, usually for between 25 and 30 cycles. At the end of the process, there is a theoretical yield of 230 (over 1 billion times) more DNA than there was to start. (This enormous amplification power is the reason that PCR is so useful for forensic investigations, where very tiny amounts of DNA may be available at a crime scene.)

The temperature cycles are controlled in a thermocycler, which repeatedly raises and lowers temperatures according to the set program. Since each cycle can be completed in a couple of minutes, the entire amplification can be completed very rapidly. The resulting DNA is analyzed on a gel to ensure that it is of the expected size, and depending on what it is to be used for, may also be sequenced, to be certain that it is the desired fragment.

PCR is frequently used to obtain gene sequences to be cloned into vectors for protein expression, for example. Besides simplicity and speed, PCR also has other advantages. Because primers can be synthesized that differ from the template sequence at any given position, it is possible to use PCR for site-directed mutagenesis. That is, PCR can be used to mutate a gene at a desired position in the sequence. This allows the proteins encoded by the normal and mutant genes to be expressed, purified and compared.

PCR can also be used to measure gene expression. Where in PCR the amount of amplified product is not determined till the end of all the cycles, a variation called quantitative real-time PCR is used, in which the accumulation of product is measured at each cycle. This is possible because real-time PCR machines have a detector module that can measure the levels of a fluorescent marker in the reaction, with the amount of fluorescence proportional to the amount of amplified product. By following the accumulation of product over the cycles it is possible to calculate the amount of starting template. To measure gene expression, the template used is mRNA reverse-transcribed into cDNA (see below). This coupling of reverse transcription with quantitative real-time PCR is called qRT-PCR.