The practice of categorizing organisms according to similar features goes back to Aristotle. The goal of Taxonomy today is to produce a formal system for naming and classifying species to illustrate their evolutionary relationships.

In classification, the taxonomist asks whether the species being classified contains the defining feature of a certain taxonomic grouping. Focus is on features.

In systematization, the taxonomist asks whether the characteristics of a species support the hypothesis that it descends from the most recent common ancestor of the taxonomic group. Focus is on evolutionary origin of those features. Taxa(singular = taxon) are the major groups of organisms. Each rank can be subdivided into additional levels of taxa. Superclass, suborder, etc.

Binomial nomenclature is the system Linnaeus developed for naming species. The two-part scientific name includes the genus and species. Names are latinized and italicized, only the genus is capatilized: Sitta carolinensis

The goal of systematics is to determine the phylogeny– the evolutionary history –  of a species or group of related species.  Phylogenies are inferred by identifying organismal features, characters, that vary among species. These characters can be: Morphological; Chromosomal; Molecular; Behavioral or ecological.

When trying to determine evolutionary relationships (inferring a phylogeny), we only want to consider homologous characters. Homoplasies can create errors.

Focusing on homologous structures, we need to determine when that character arose.  Newer characters tell us more! Primitive (older) vs. derived (newer) characters

A shared primitive character is a homologous structure that is older than the branching of a particular clade from other members of that clade.  It is shared by more than just the taxon we are trying to define.  Example – mammals all have a backbone, but so do other vertebrates.  A shared derived character is a new evolutionary feature, unique to a particular group.  Example - all mammals have hair, and no other animals have hair. These are the features that are most useful for determining evolutionary relationships!

Polarity(which version of the trait is ancestral) is determined by using outgroup comparison.  An outgroup is closely related, but not part of the group being examined (the ingroup). An ancestral character is one that is found in both the study group and the outgroup.  Derived character groups are those found in the study groups but not the outgroups.

Clades are groups that share derived characters and form a subset within a larger group.  A clade is a unit of common evolutionary descent.

The nested hierarchy of clades can be shown as a cladogram that is based on synapomorphies. A valid clade is monophyletic, it consists of the ancestor species and all its descendants. A paraphyletic clade consists of an ancestral species and some, but not all, of the descendants. 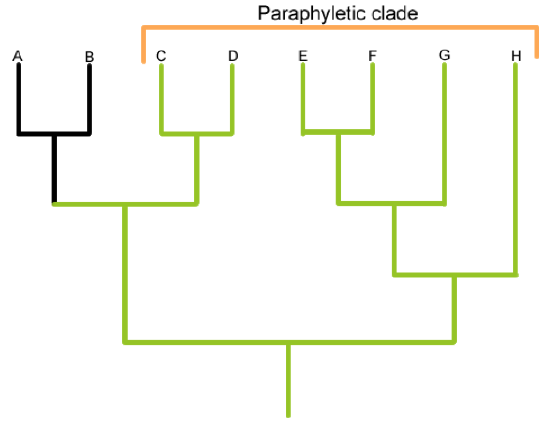 A polyphyleticclade includes many species that lack a common ancestor. Cladistics, also called phylogenetic systematics, is a taxonomic theory that is based on cladograms. All taxa must be monophyletic!

Traditional Evolutionary taxonomy is based on common descent and the amount of evolutionary change to rank higher taxa. 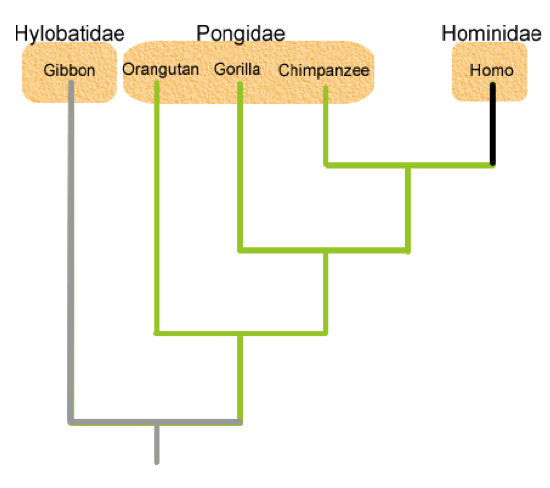 Since all groupings must be monophyletic in cladistics, the paraphyletic arrangement of ape families doesn’t work. Humans, chimpanzees, gorillas, and orangutans are now all included together in one monophyletic family - Hominidae. The important difference between these two theories of taxonomy is that traditional evolutionary taxonomy sometimes accepts paraphyletic clades, while cladistics does not.  Both accept monophyletic clades.  Both reject polyphyletic clades.