1. Explain how plants make organic molecules. Include the terms CO2, H2O, photosynthesis, sugar, and sunlight in your answer.

2. How do animals get organic molecules?

One type of food chain begins with a producer:

Another type of food chain begins with dead organic matter:

Organisms can be categorized in different trophic levels, e.g. producer, primary consumer or decomposer, and secondary consumer. If a consumer eats organisms at more than one trophic level, it is called a trophic omnivore. Trophic omnivores are a broad category that includes not only omnivores (animals that eat both plants and animals), but also some other types of organisms (see question 5 below).

Your teacher will supply your group with a deck of cards, each of which describes one type of organism that lives in Yellowstone National Park (plus a card for dead organic matter).

The diagram below shows a small part of a food web. Notice that the food web contains multiple food chains. 5. Explain why the hawk in this food web is a trophic omnivore, even though it does not eat both plants and animals.

6. After your teacher has checked and approved your food web, draw a diagram of the food web on a separate sheet of paper. Include all of the organisms and arrows.

7. What problem or problems would occur if there were no decomposers and no brown food web?

The third graph shows trends in the amount of growth of willows (data for annual growth ring size from two different studies). 8. For each organism in the table below:

Three other processes that contribute to the movement of carbon atoms and energy in an ecosystem are photosynthesis, cellular respiration and biosynthesis. Each of these processes is shown in a chart where:

Some of the sugar molecules produced by photosynthesis are used for cellular respiration.

10. Use the information about photosynthesis and cellular respiration to explain how carbon atoms can move from CO2 in the air into an organic molecule inside a plant and then back to CO2 in the air.

11. The main function of cellular respiration is to produce ATP. Why do cells need ATP?

12. Explain how a carbon atom in a CO2 molecule in the air can become part of a cellulose molecule in a plant.

The following general principles apply to photosynthesis, cellular respiration, biosynthesis, and all other biological processes.

14a. Explain how photosynthesis illustrates the first of these general principles.

14b. Explain how photosynthesis illustrates the last two general principles.

In this section, you will use your understanding of food webs, photosynthesis, cellular respiration and biosynthesis to analyze how carbon atoms and energy move in ecosystems. The figure below shows how these processes result in a carbon cycle. Notice how carbon atoms cycle between CO2 in the air and organic molecules in living organisms or dead organic matter. 16a. Explain why this carbon cycle diagram does not have a B arrow that shows carbon atoms going from CO2 molecules in the air directly to the giraffe.

16b. Explain why there is no arrow that shows carbon atoms going from the soil to the tree.

Notice that energy cannot cycle in the same way that carbon cycles. All energy transformations are inefficient, so some of the input energy is transformed to heat, and heat cannot be used as the input energy for photosynthesis.

This diagram summarizes how: 18a. Show how energy moves through the ecosystem summarized in the chart below. Include arrows that show: 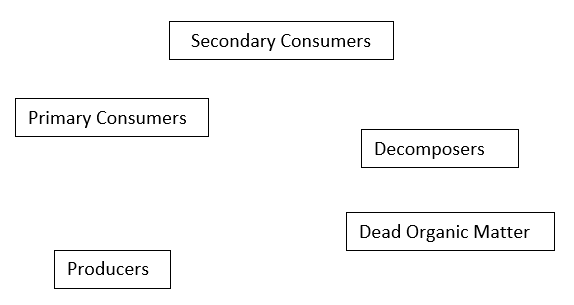 18b. Use an asterisk (*) to mark the arrow that shows energy entering the ecosystem.

18c. Circle each arrow that indicates energy leaving the ecosystem.

19. The earth receives substantial energy from the sun, but the earth does not receive any significant inflow of new atoms. Explain why:

20. The average American consumes almost 2000 pounds of food each year. Obviously, we do not gain 2000 pounds of weight each year! What happened to all the weight of the food we ate? Where did the atoms in the food molecules go?

For each of the other three trophic levels, draw a bar that fills in the appropriate number of squares to represent the rate of biomass production shown in the above table. For each trophic level, your bar should extend the full height of the row for that trophic level; thus, all of the bars should be equally tall, but different widths.

The information in the graph you just made is often displayed in a trophic pyramid like this one below. 24a. Use this general estimate to label each level in this trophic pyramid with the appropriate percent, beginning with 100% as the rate of production of biomass for producers.

24b. If the producers in this ecosystem produce 1000 g of biomass each day, how many grams of biomass will the tertiary consumers produce each day?

Explain the reasoning that supports your answer.