I. Mice Living in a Desert

These drawings show how a population of mice on a beach changed over time. 1. Describe how the population of mice is different in figure 3 compared to figure 1. Explain what happened to cause this difference.

An adaptation is any characteristic that increases fitness, which is defined as the ability to survive and reproduce.

2. For the mice in the figure, what characteristic was an adaptation that increased fitness?

What does the term fitness mean when biologists are discussing evolution?

What does the term physical fitness mean?

Suppose a population had three female mice with the following characteristics.

To understand the importance of adaptive heritable traits, think about what would happen if a population of mice in an area of gray sand started with a pair of white mice, a pair of gray mice, and a pair of black mice in generation 1.

5. Explain why the percent of mice with gray fur would increase from generation 1 to generation 2. Include the terms fitness and adaptive heritable trait in your explanation.

7a. A population of mostly gray mice living on a patch of gray sand are asleep in their burrows. While the mice are sleeping, the gray sand is replaced by white sand. (Perhaps the owner of the desert has a plan to attract more tourists.) Think about what would happen to the population of mice on the white sand. After several generations, most of the mice would have _____________ fur.

7b. Explain how the change in the color of the sand could result in a change in the most common fur color in this population of mice.

8. When mice live on gray sand, which color fur is an adaptive heritable trait?

When mice live on white sand, which color fur is an adaptive heritable trait?

Is the same trait adaptive in both environments?

9. Explain how these drawings illustrate an example of natural selection. Include the term "adaptive heritable trait" in your answer. 10. Your teacher will scatter an equal number of black and red pom-poms on the Black Forest and on the Red Grassland.  Which color pom-pom do you think will be more likely to be captured and eaten in each habitat?

Explain the reasons for your predictions.

Explain the reasons for your predictions.

Go to your assigned habitat: Black Forest or Red Grassland.

Next, you will run through the simulation one more time.

12. For each habitat, evaluate the data on the board that shows the number of hunters with spoon vs. fork feeding structures. Were there any changes from generation 1 (the beginning of the simulation) to generation 3 (the end of the second cycle)? If yes, describe the change or changes and propose possible explanations.

13. Copy the pom-pom data from the table displayed by your teacher into the table below.  Then, for each generation of pom-poms in each habitat, calculate the percent of each color.

14. Use the data to complete the following graphs.  This will help you to see the trends in the percent of pom-poms of each color over the three generations in each habitat. 15b. At the beginning of the simulation, the pom-pom populations were half red and half black in both the Black Forest and the Red Grassland.  Explain why the trends in pom-pom colors differed in these two different habitats.

17b. Next, think about an alternative scenario. Suppose that natural selection over many generations had eliminated all the red pom-poms in the black forest habitat so only black pom-poms survived. After that, a prolonged drought resulted in this habitat turning into a red grassland.  Would natural selection for pom-pom color occur? Why or why not?

17c. Based on this example, explain why evolution by natural selection can only occur if there is variation in a trait.

18a. Suppose that your class repeated the simulation, but this time all the hunters were blindfolded so they could only find pom-poms by touch. For each habitat, predict the proportion of red and black pom-poms in the population at the end of the simulation. (Remember that at the beginning of the simulation half the pom-poms were red and half were black.)

18b. Explain your reasoning.

18c. Based on this example, explain why evolution by natural selection can only occur if the variation in a trait results in differences in fitness.

19. Next, think about what would happen if your class repeated the simulation with hunters that could see, but pom-pom color was not heritable. In other words, the color of pom-pom offspring would not be related to the color of their parents. No matter how many pom-pom parents were red or black, half of the offspring would be red and half would be black. Based on this example, explain why evolution by natural selection can only occur if the variation in a trait is heritable.

This simulation provides a useful basis for understanding many aspects of natural selection. However, it is important to note that, because a simulation necessarily simplifies the process that it mimics, there will be important differences between the simulation and the actual biological process. For example:

Because of these differences between our simulation and reality, natural selection would be slower in real biological populations. You will see an example of this in the next section. 20a. Researchers have found differences in mortality for the speckled and black forms of the peppered moth in different types of environment.

Which form of the peppered moth do you think had higher mortality in forests in unpolluted areas where tree trunks and branches are lighter? ___black     ___ speckled

Which form of the peppered moth do you think had higher mortality in forests in areas where air pollution had resulted in dark tree trunks and branches?  ___ black

20b. Explain your reasoning.

22. In the first column of this table, state three necessary conditions for evolution by natural selection to occur. (Hint: See questions 17c, 18c and 19.) In the second column, explain the evidence that each of these necessary conditions is satisfied by the black vs. speckled forms of the peppered moth.

Beginning in the late 1950s, government regulation resulted in decreased air pollution. Consequently, tree trunks and branches became lighter. As would be expected, there was a decrease in the percent of peppered moths that were black. This decrease is shown for one area in England (black dots) and one area in Michigan (black diamonds for 1959-1962 and 1994-1995).

The open circles in the graph represent the trend predicted by a model of natural selection which incorporated experimental estimates of higher mortality rates for black peppered moths in unpolluted environments. 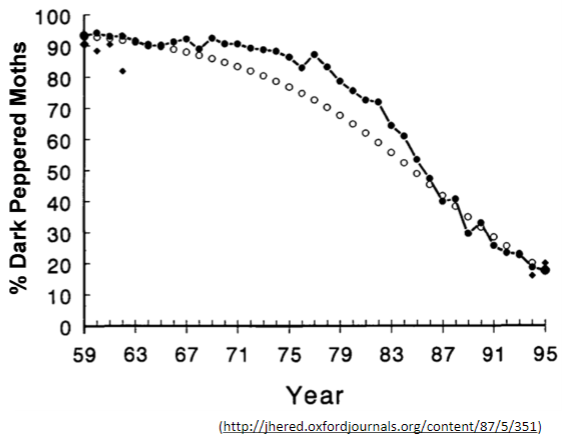 23. Which trait was an adaptive heritable trait for peppered moths in industrialized areas with dark tree trunks and branches?    ___ black form        ___ speckled form

Which trait is an adaptive heritable trait for peppered moths in unpolluted areas with lighter tree trunks and branches?    ___ black form        ___ speckled form

Write a scientifically more accurate explanation of what happened to cause the trends in the proportion of black peppered moths.

25b. Compare and contrast the common conception of survival of the fittest with the scientific definition of which organisms are the fittest in terms of natural selection.

26. Use the peppered moth example to illustrate the following generalization:

"Natural selection acts on individuals, but only populations evolve."