How do Genes Influence Our Characteristics?

1. Circle the genotypes in the chart that are homozygous. Explain how the two different homozygous genotypes result in different phenotypes. What is the molecular mechanism?

A person who is heterozygous Aa has the same phenotype as a person who is homozygous AA because skin cells that have at least one 'A' allele produce enough melanin to result in normal skin color.

How does a Baby Inherit Genes from his or her Mother and Father?

To learn more about how genes are inherited, we will start with a specific question:

3. Begin by completing this diagram to show how meiosis produces sperm in the father. What is the genetic makeup of the different types of sperm that an Aa father can produce? ____ or ____

What would be the genetic makeup of the different types of eggs that an Aa mother can produce? ____ or ____ This chart combines the results of meiosis and fertilization for an Aa mother and Aa father. It shows the genetic makeup of the different zygotes that this couple could produce.

Each zygote undergoes repeated mitosis to become a child, so the child has the same genetic makeup as the zygote. 5. For this Punnett square:

9. For each of the four Punnett squares above, circle the genotype of anyone who would have normal skin and hair color.

11. Albino children are rare in the general population. Based on this observation, what is the most common genotype for parents? Explain your reasoning.

1. In the figure below, label each cell with the appropriate symbols (X, Y) for the sex chromosome or chromosomes. For meiosis, show the cells in the mother on the left and the cells in the father on the right. Show fertilization for a zygote that will develop into a female on the left and a zygote that will develop into a male on the right. 2. Complete this Punnett Square to show the inheritance of the sex chromosomes. Use X and Y to indicate the genetic makeup of the gametes and zygotes. 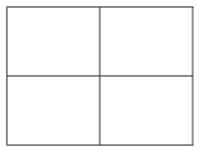 3. Based on this Punnett Square, what percent of children would you expect to be male?

4. To test this prediction, begin by writing down the initials of all the children your mother has had. Arrange these initials in order from the youngest to the oldest, indicating whether each was male or female.

6. Use your group's data and data from nearby student groups to answer the following questions.

7. Compare the predicted percent male with the observed percent male for each mother who had two or more children. Use an arrow to indicate any of these families that had <33% male or >67% male (considered to be substantially different from predicted). Check the results for the other student groups that are near you.

8. Your teacher will provide the class results to enter in the next-to-the-last row of table. Is the result for the whole class <33% male or >67% male (i.e. substantially different from the Punnett square prediction)? ___ yes ___ no

- Explain how you can determine the genotypes of 1 and 2. Include the Punnett Square for these parents in your explanation. Write their genotypes in the pedigree.

- Write the genotypes of 3 and 4 in the pedigree.

- Explain how you can figure out the genotype of 7 and write her genotype in the pedigree.

Many other conditions are the result of homozygous recessive alleles, so these conditions are inherited in the same manner as albinism. These include:

This pedigree shows the inheritance of a different condition called achondroplasia (ay-kon-druh-play-zhuh), a form of dwarfism. Dark circles or squares represent individuals with achondroplasia.

3. Based on the frequency of dwarfs among the people you have seen in your lifetime, do you think that the allele for achondroplasia is common or rare in the population? Explain your reasoning.

5. What are some advantages of a Punnett Square as a model of inheritance?