Plasma membranes enclose and define the borders between the inside and the outside of cells. They are typically composed of dynamic bilayers of phospholipids into which various other lipid soluble molecules and proteins have also been embedded. These bilayers are asymmetric—the outer leaf being different than the inner leaf in lipid composition and in the proteins and carbohydrates that are displayed to either the inside or outside of the cell. Various factors influence the fluidity, permeability, and various other physical properties of the membrane. These include the temperature, the configuration of the fatty acid tails (some kinked by double bonds), the presence of sterols (i.e., cholesterol) embedded in the membrane, and the mosaic nature of the proteins embedded within it. The cell membrane has selectivity; it allows only some substances through while excluding others. In addition, the plasma membrane must, in some cases, be flexible enough to allow certain cells, such as amoebae, to change shape and direction as they move through the environment, hunting smaller, single-celled organisms. The ratio of membrane thickness compared to the size of an average eukaryotic cell is much greater compared to that of a balloon stretched with air. To think that the boundary between life and nonlife is so small, and seemingly fragile, more so than a balloon, suggests that structurally the membrane must be relatively stable. Discuss why cellular membranes are stable. You will need to pull from information we have already covered in this class.

Figure 2. The fluid mosaic model of the plasma membrane describes the plasma membrane as a fluid combination of phospholipids, cholesterol, and proteins. Carbohydrates attached to lipids (glycolipids) and to proteins (glycoproteins) extend from the outward-facing surface of the membrane.

The principal components of a plasma membrane are lipids (phospholipids and cholesterol), proteins, and carbohydrates. The proportions of proteins, lipids, and carbohydrates in the plasma membrane vary with organism and cell type, but for a typical human cell, proteins account for about 50 percent of the composition by mass, lipids (of all types) account for about 40 percent of the composition by mass, and carbohydrates account for the remaining 10 percent of the composition by mass. However, the concentration of proteins and lipids varies with different cell membranes. For example, myelin, an outgrowth of the membrane of specialized cells, insulates the axons of the peripheral nerves, contains only 18 percent protein and 76 percent lipid. The mitochondrial inner membrane contains 76 percent protein and only 24 percent lipid. The plasma membrane of human red blood cells is 30 percent lipid. Carbohydrates are present only on the exterior surface of the plasma membrane and are attached to proteins, forming glycoproteins, or attached to lipids, forming glycolipids.

Make sure to note in Figure 3 that the phosphate group has an R group linked to one of the oxygen atoms. R is a variable commonly used in these types of diagrams to indicate that some other atom or molecule is bound at that position. That part of the molecule can be different in different phospholipids—and will impart some different chemistry to the whole molecule. At the moment, however, you are responsible for being able to recognize this type of molecule (no matter what the R group is) because of the common core elements—the glycerol backbone, the phosphate group, and the two hydrocarbon tails. Figure 3. A phospholipid is a molecule with two fatty acids and a modified phosphate group attached to a glycerol backbone. The phosphate may be modified by the addition of charged or polar chemical groups. Several chemical R groups may modify the phosphate. Choline, serine, and ethanolamine are shown here. These attach to the phosphate group at the position labeled R via their hydroxyl groups.
Attribution: Marc T. Facciotti (own work) 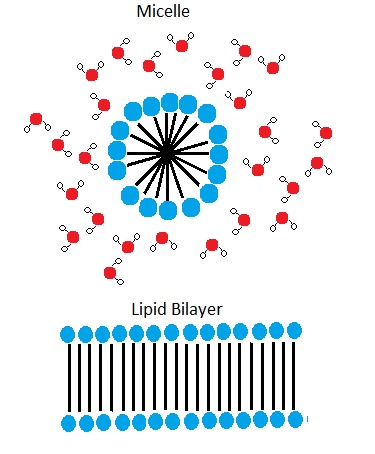 Figure 4. In the presence of water, some phospholipids will spontaneously arrange themselves into a micelle. The lipids will be arranged such that their polar groups will be on the outside of the micelle, and the nonpolar tails will be on the inside. A lipid bilayer can also form, a two layered sheet only a few nanometers thick. The lipid bilayer consists of two layers of phospholipids organized in a way that all the hydrophobic tails align side by side in the center of the bilayer and are surrounded by the hydrophilic head groups.
Source: Created by Erin Easlon (own work)

Note that the phospholipid depicted above has an R group linked to the phosphate group. Recall that this designation is generic—these can be different than the R groups on amino acids. What might be a benefit/purpose of "functionalizing" or "decorating" different lipids with different R groups? Think of the functional requirements for membranes stipulated above. Carbohydrates are the third major component of plasma membranes. They are always found on the exterior surface of cells and are bound either to proteins (forming glycoproteins) or to lipids (forming glycolipids). These carbohydrate chains may consist of 2–60 monosaccharide units and can be either straight or branched. Along with peripheral proteins, carbohydrates form specialized sites on the cell surface that allow cells to recognize each other (one of the core functional requirements noted above in "cellular membranes").

The mosaic characteristic of the membrane, described in the fluid mosaic model, helps to illustrate its nature. The integral proteins and lipids exist in the membrane as separate molecules and they "float" in the membrane, moving somewhat with respect to one another. The membrane is not like a balloon, however, that can expand and contract; rather, it is fairly rigid and can burst if penetrated or if a cell takes in too much water. However, because of its mosaic nature, a very fine needle can easily penetrate a plasma membrane without causing it to burst, and the membrane will flow and self-seal when the needle is extracted.