At its simplest, evolution is any change in heritable traits in a population of organisms across generations. These changes may be the result of natural selection, genetic drift, mutation, etc – processes that we will consider in depth later in the course. All populations experience evolutionary change, as influenced by their environment, their interactions with other organisms, and random chance. Like ecology, we can consider evolution at different scales.

Microevolution is genetic change that occurs over small timescales and results in small changes in heritable traits. For example, Drs. Peter and Rosemary Grant studied medium ground finches (Geospiza fortis, Fig 1.3.1) in the Galápagos Islands for over 40 years, tracking the body size, beak size, weight, and other traits in the entire population over numerous generations. In 1977 a major drought hit the island of Daphne Major where the Grants were performing their study. The drought caused a change in the vegetation of the island, whose seeds are the food source for the ground finches. In the generation following the drought, the Grants documented an increase in the beak size of the ground finches in response to the change in seeds on which they feed. This relatively small change in a heritable trait across generations represents a microevolutionary response to the 1977 drought. 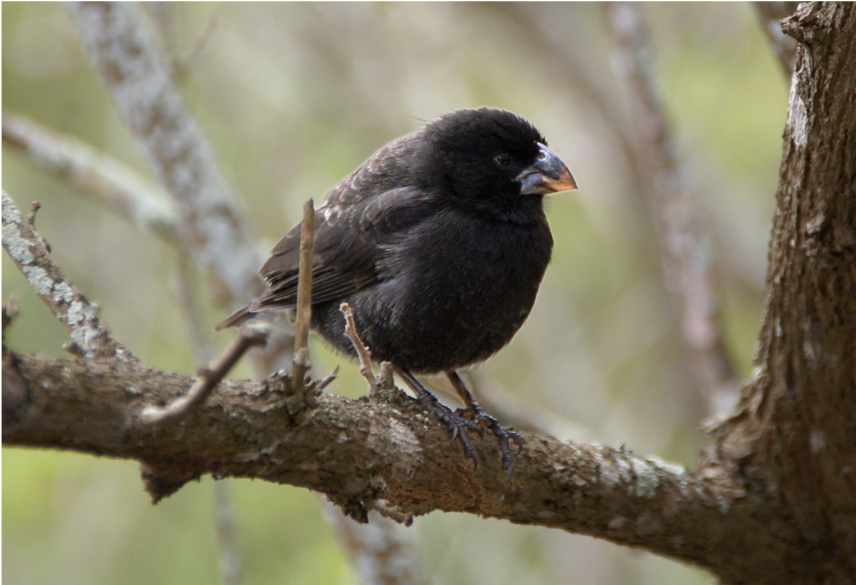 Macroevolution is genetic change that occurs over long time scales, resulting in large changes in heritable traits in a population; changes large enough that we consider this population a unique taxonomic group, or species. Macroevolution is sometimes also termed speciation (the process by which a new species arises). This is the scale of evolutionary change that most people think of when someone mentions ‘evolution’. For example, the medium ground finch is not the only finch species in the Galápagos Islands. The genus Geospiza contains nine species, all of which are found exclusively in the Galápagos Islands. Approximately 2 million years ago, the ancestor of these species migrated to the Galápagos Islands from South America. Between then and now, the birds migrated throughout the Galápagos Islands and across generations experienced different microevolutionary changes. Eventually, these small differences accumulated to the point that individuals of different populations are genetically distinct, no longer interbreed with one another, and perform different ecological roles in the habitat (for instance, some feed on seeds, while others feed on insects). Consequently, we now consider them different species. Geospiza is not the only group of finches on the Galápagos Islands - Figure 1.3.2 illustrates differences in head and beak shape between several finch groups on the Islands. It is important to note that microevolution and macroevolution are not different processes. Both relate to genetic changes in a population across generations; the only difference is the timescale on which the two operate. Macroevolution is the accumulation of microevolutionary changes over a long period of time to the point that the population is unique from other populations, and is considered a distinct species.