1) Frederick Griffith infected mice with a combination of dead R and live S bacterial strains. What was the outcome, and why did it occur?

2) Why was the alga Acetabularia a good model organism for Joachim Hämmerling to use to identify the location of genetic material?

3) Which of the following best describes the results from Hershey and Chase’s experiment using bacterial viruses with 35S-labeled proteins or 32P-labeled DNA that are consistent with protein being the molecule responsible for hereditary?

4) Which method did Morgan and colleagues use to show that hereditary information was carried on chromosomes?

6) Which of the following is not found within DNA?

7) If 30% of the bases within a DNA molecule are adenine, what is the percentage of thymine?

8) Which of the following statements about base pairing in DNA is incorrect?

9) During denaturation of DNA, which of the following happens?

18) Which of the following types of RNA codes for a protein?

19) A nucleic acid is purified from a mixture. The molecules are relatively small, contain uracil, and most are covalently bound to an amino acid. Which of the following was purified?

20) Which of the following types of RNA is known for its catalytic abilities?

21) Ribosomes are composed of rRNA and what other component?

22) Which of the following may use RNA as its genome?

23) During which stage of bacterial transcription is the σ subunit of the RNA polymerase involved?

24) Which of the following components is involved in the initiation of transcription?

25) Which of the following is not a function of the 5’ cap and 3’ poly-A tail of a mature eukaryotic mRNA molecule?

26) Mature mRNA from a eukaryote would contain each of these features except which of the following?

27) Which of the following is the name of the three-base sequence in the mRNA that binds to a tRNA molecule?

29) During elongation in translation, to which ribosomal site does an incoming charged tRNA molecule bind?

30) Which of the following is the amino acid that appears at the N-terminus of all newly translated prokaryotic and eukaryotic polypeptides?

31) When the ribosome reaches a nonsense codon, which of the following occurs?

32) Which of the following correctly describes the structure of the typical eukaryotic genome?

33) Which of the following is typically found as part of the prokaryotic genome?

34) Serratia marcescens cells produce a red pigment at room temperature. The red color of the colonies is an example of which of the following?

35) Which of the following is a change in the sequence that leads to formation of a stop codon?

36) The formation of pyrimidine dimers results from which of the following?

37) Which of the following is an example of a frameshift mutation?

38) Which of the following is the type of DNA repair in which thymine dimers are directly broken down by the enzyme photolyase?

39) Which of the following regarding the Ames test is true?

40) Which is the mechanism by which improper excision of a prophage from a bacterial chromosome results in packaging of bacterial genes near the integration site into a phage head?

41) Which of the following refers to the uptake of naked DNA from the surrounding environment?

42) The F plasmid is involved in which of the following processes?

43) Which of the following refers to the mechanism of horizontal gene transfer naturally responsible for the spread of antibiotic resistance genes within a bacterial population?

44) An operon of genes encoding enzymes in a biosynthetic pathway is likely to be which of the following?

45) An operon encoding genes that are transcribed and translated continuously to provide the cell with constant intermediate levels of the protein products is said to be which of the following?

46) Which of the following conditions leads to maximal expression of the lac operon?

47) Which of the following is a type of regulation of gene expression unique to eukaryotes?

49) A cell’s ________ remains constant whereas its phenotype changes in response to environmental influences.

50) The enzyme responsible for relaxing supercoiled DNA to allow for the initiation of replication is called ________.

51) Unidirectional replication of a circular DNA molecule like a plasmid that involves nicking one DNA strand and displacing it while synthesizing a new strand is called ________.

53) The protein complex responsible for removing intron-encoded RNA sequences from primary transcripts in eukaryotes is called the ________.

54) The third position within a codon, in which changes often result in the incorporation of the same amino acid into the growing polypeptide, is called the ________.

56) A chemical mutagen that is structurally similar to a nucleotide but has different base-pairing rules is called a ________.

58) The phenotype of an organism that is most commonly observed in nature is called the ________.

59) A small DNA molecule that has the ability to independently excise from one location in a larger DNA molecule and integrate into the DNA elsewhere is called a ________.

60) ________ is a group of mechanisms that allow for the introduction of genetic material from one organism to another organism within the same generation.

61) The DNA sequence, to which repressors may bind, that lies between the promoter and the first structural gene is called the ________.

62) The prevention of expression of operons encoding substrate use pathways for substrates other than glucose when glucose is present is called _______.

66) Plasmids are typically transferred among members of a bacterial community by ________ gene transfer.

67) Why do bacteria and viruses make good model systems for various genetic studies?

68) Why was nucleic acid disregarded for so long as the molecule responsible for the transmission of hereditary information?

69) Bacteriophages inject their genetic material into host cells, whereas animal viruses enter host cells completely. Why was it important to use a bacteriophage in the Hershey–Chase experiment rather than an animal virus?

70) What is the role of phosphodiester bonds within the sugar-phosphate backbone of DNA?

71) What is meant by the term “antiparallel?”

72) Why is DNA with a high GC content more difficult to denature than that with a low GC content?

74) How is the information stored within the base sequence of DNA used to determine a cell’s properties?

75) How do complementary base pairs contribute to intramolecular base pairing within an RNA molecule?

76) If an antisense RNA has the sequence 5ʹAUUCGAAUGC3ʹ, what is the sequence of the mRNA to which it will bind? Be sure to label the 5ʹ and 3ʹ ends of the molecule you draw.

78) What are some differences in chromosomal structures between prokaryotes and eukaryotes?

79) How do prokaryotes and eukaryotes manage to fit their lengthy DNA inside of cells? Why is this necessary?

80) What are some functions of noncoding DNA?

81) In the chromatin of eukaryotic cells, which regions of the chromosome would you expect to be more compact: the regions that contain genes being actively copied into RNA or those that contain inactive genes?

82) Can two observably different cells have the same genotype? Explain.

83) Why is primase required for DNA replication?

84) What is the role of single-stranded binding protein in DNA replication?

85) Below is a DNA sequence. Envision that this is a section of a DNA molecule that has separated in preparation for replication, so you are only seeing one DNA strand. Construct the complementary DNA sequence (indicating 5’ and 3’ ends).

86) What is the purpose of RNA processing in eukaryotes? Why don’t prokaryotes require similar processing?

87) Below is a DNA sequence. Envision that this is a section of a DNA molecule that has separated in preparation for transcription, so you are only seeing the antisense strand. Construct the mRNA sequence transcribed from this template.

89) Why does translation terminate when the ribosome reaches a stop codon? What happens?

90) How does the process of translation differ between prokaryotes and eukaryotes?

91) What is meant by the genetic code being nearly universal?

94) Why is it more likely that insertions or deletions will be more detrimental to a cell than point mutations?

95) Briefly describe two ways in which chromosomal DNA from a donor cell may be transferred to a recipient cell during the process of conjugation.

96) Describe what happens when a nonsense mutation is introduced into the gene encoding transposase within a transposon.

97) What are two ways that bacteria can influence the transcription of multiple different operons simultaneously in response to a particular environmental condition?

98) In the first figure from this chapter, if the nuclei were contained within the stalks of Acetabularia, what types of caps would you expect from the pictured grafts?

99) Why are Hershey and Chase credited with identifying DNA as the carrier of heredity even though DNA had been discovered many years before?

100) A certain DNA sample is found to have a makeup consisting of 22% thymine. Use Chargaff’s rules to fill in the percentages for the other three nitrogenous bases.

102) Identify the location of mRNA, rRNA, and tRNA in the figure. 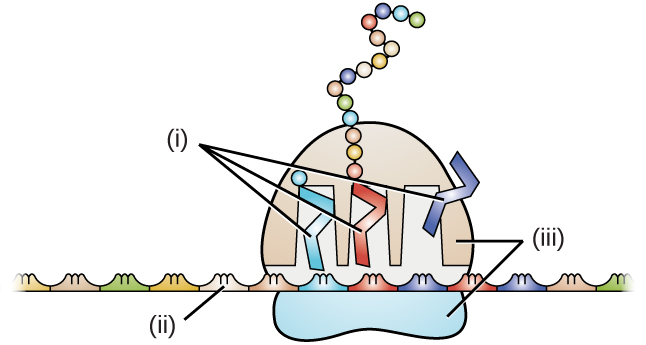 103) Why does it make sense that tRNA and rRNA molecules are more stable than mRNA molecules?

105) A pure culture of an unknown bacterium was streaked onto plates of a variety of media. You notice that the colony morphology is strikingly different on plates of minimal media with glucose compared to that seen on trypticase soy agar plates. How can you explain these differences in colony morphology?

106) Why was it important that Meselson and Stahl continue their experiment to at least two rounds of replication after isotopic labeling of the starting DNA with 15N, instead of stopping the experiment after only one round of replication?

107) If deoxyribonucleotides that lack the 3’-OH groups are added during the replication process, what do you expect will occur?

108) Predict the effect of an alteration in the sequence of nucleotides in the –35 region of a bacterial promoter.

110) Prior to the elucidation of the genetic code, prominent scientists, including Francis Crick, had predicted that each mRNA codon, coding for one of the 20 amino acids, needed to be at least three nucleotides long. Why is it not possible for codons to be any shorter?

111) Below are several DNA sequences that are mutated compared with the wild-type sequence: 3’-T A C T G A C T G A C G A T C-5’. Envision that each is a section of a DNA molecule that has separated in preparation for transcription, so you are only seeing the template strand. Construct the complementary DNA sequences (indicating 5’ and 3’ ends) for each mutated DNA sequence, then transcribe (indicating 5’ and 3’ ends) the template strands, and translate the mRNA molecules using the genetic code, recording the resulting amino acid sequence (indicating the N and C termini). What type of mutation is each?

112) Why do you think the Ames test is preferable to the use of animal models to screen chemical compounds for mutagenicity?

113) The following figure is from Monod’s original work on diauxic growth showing the growth of E. coli in the simultaneous presence of xylose and glucose as the only carbon sources. Explain what is happening at points A–D with respect to the carbon source being used for growth, and explain whether the xylose-use operon is being expressed (and why). Note that expression of the enzymes required for xylose use is regulated in a manner similar to the expression of the enzymes required for lactose use. 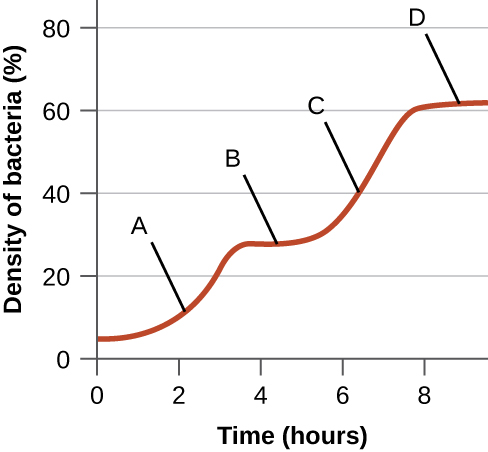