We have already covered the main internal components found in all bacteria, namely, cytoplasm, the nucleoid, and ribosomes. Remember that bacteria are generally thought to lack organelles, those bilipid membrane-bound compartments so prevalent in eukaryotic cells (although some scientists argue that bacteria possess structures that could be thought of as simple organelles). But bacteria can be more complex, with a variety of additional internal components to be found that can contribute to their capabilities. Most of these components are cytoplasmic but some of them are periplasmic, located in the space between the cytoplasmic and outer membrane in gram negative bacteria.

It was originally thought that bacteria lacked a cytoskeleton, a significant component of eukaryotic cells. In the last 20 years, however, scientists have discovered bacterial filaments made of proteins that are analogues to the cytoskeletal proteins found in eukaryotes. It has also been determined that the bacterial cytoskeleton plays important roles in cell shape, cell division, and integrity of the cell wall.

FtsZ, homologous to the eukaryotic protein tubulin, forms a ring structure in the middle of the cell during cell division, attracting other proteins to the area in order to construct a septum that will eventually separate the two resulting daughter cells.

MreB, homologous to the eukaryotic protein actin, is found in bacillus and spiral-shaped bacteria and plays an essential role in cell shape formation. MreB assumes a helical configuration running the length of the cell and dictates the activities of the peptidoglycan-synthesis machinery, assuring a non-spherical shape.

Crescentin, homologous to the eukaryotic proteins lamin and keratin, is found in spiral-shaped bacteria with a single curve. The protein assembles lengthwise in the inner curvature of the cell, bending the cell into its final shape. Bacterial inclusions are generally defined as a distinct structure located either within the cytoplasm or periplasm of the cell. They can range in complexity, from a simple compilation of chemicals such as crystals, to fairly complex structures that start to rival that of the eukaryotic organelles, complete with a membranous external layer. Their role is often to store components as metabolic reserves for the cell when a substance is found in excess, but they can also play a role in motility and metabolic functions as well.

Carbon is the most common substance to be stored by a cell, since all cells are carbon based. In addition, carbon compounds can often be broken down quickly by the cell, so they can serve as energy sources as well. One of the simplest and most common inclusions for carbon storage is glycogen, in which glucose units are linked together in a multi-branching polysaccharide structure.

Another common way for bacteria to store carbon is in the form of poly-β-hydroxybutyrate (PHB), a granule that forms when β-hydroxybutyric acid units aggregate together. This lipid is very plastic-like in composition, leading some scientists to investigate the possibility of using them as a biodegradeable plastic. The PHB granules actually have a shell composed of both protein and a small amount of phospholipid. Both glycogen and PHB are formed when there is an excess of carbon and then broken down by the cell later for both carbon and energy.

Often bacteria need something other than carbon, either for synthesis of cell components or as an alternate energy reserve. Polyphosphate granules allow for the accumulation of inorganic phosphate (PO43-), where the phosphate can be used to make nucleic acid (remember the sugar-phosphate backbone?) or ATP (adenosine triphosphate, of course).

Other cells need sulfur as a source of electrons for their metabolism and will store excess sulfur in the form of sulfur globules, which result when the cell oxidizes hydrogen sulfide (H2S) to elemental sulfur (S0), resulting in the formation of refractile inclusions.

There are times when a bacterium needs to do something beyond simple storage of organic or inorganic compounds for use in metabolism and there are inclusions to help with these non-storage functions. One such example is gas vacuoles, which are used by the cell to control buoyancy in a water column, providing the cell with some control over where it is in the environment. It is a limited form of motility, on the vertical axis only. Gas vacuoles are composed of conglomerations of gas vesicles, cylindrical structures that are both hollow and rigid. The gas vesicles are freely permeable to all types of gases by passive diffusion and can be quickly constructed or collapsed, as needed by the cell to ascend or descend.

Magnetosomes are inclusions that contain long chains of magnetite (Fe3O4), which are used by the cell as a compass in geomagnetic fields, for orientation within their environment. Magnetotactic bacteria are typically microaerophilic, preferring an environment with a lower level of oxygen than the atmosphere. The magenetosome allows the cells to locate the optimum depth for their growth. Magenetosomes have a true lipid bilayer, reminiscent of eukaryotic organelles, but it is actually an invagination of the cell’s plasma membrane that has been modified with specific proteins.

Bacterial microcompartments (BMCs) are unique from other inclusions by virtue of their structure and functionality. They are icosahedral in shape and composed of a protein shell made up of various proteins in the BMC family. While their exact role varies, they all participate in functions beyond simple storage of substances. These compartments provide both a location and the substances (usually enzymes) necessary for particular metabolic activities.

The best studied example of a BMC is the carboxysome, which are found in many CO2-fixing bacteria. Carboxysomes contain the enzyme ribulose-1,5-bisphosphate carboxylase (luckily it is also known as RubisCO), which plays a crucial role in converting CO2 into sugar. The carboxysome also plays a role in the concentration of CO2, thus ensuring that the components necessary for CO2-fixation are all in the same place at the same time.

The anammoxosome is a large membrane-bound compartment found in bacterial cells capable of carrying out the annamox reaction (anaerobic ammonium oxidation), where ammonium (NH4+) and nitrite (NO2-) are converted to dinitrogen gas (N2). The process is performed as a way for the cell to get energy, using ammonium as an electron donor and nitrite as an electron accept, with the resulting production of nitrogen gas. This chemical conversion of nitrogen is important for the nitrogen cycle. 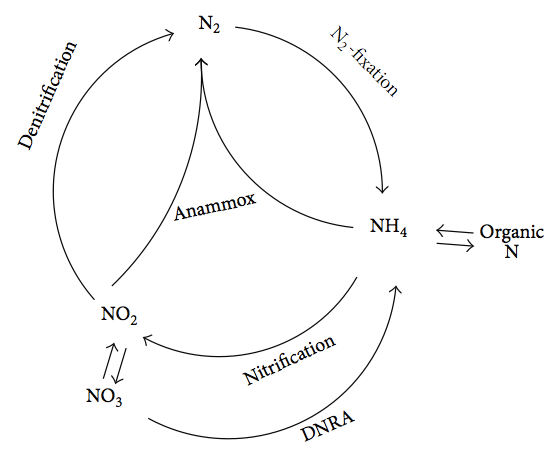 Nitrogen Cycle. By Shou-Qing Ni and Jian Zhang [CC BY 3.0], via Wikimedia Commons

Found in some phototrophic bacteria, a chlorosome is a highly efficient structure for capturing low light intensities. Lining the inside perimeter of the cell membrane, each chlorosome can contain up to 250,000 bacteriochlorophyll molecules, arranged in dense arrays. Harvested light is transferred to reaction centers in the cell membrane, allowing the conversion from light energy to chemical energy in the form of ATP. The chlorosome is bounded by a lipid monolayer.

A plasmid is an extrachromosomal piece of DNA that some bacteria have, in addition to the genetic material found in the nucleoid. It is composed of double-stranded DNA and is typically circular, although linear plasmids have been found. Plasmids are described as being “non-essential” to the cell, where the cell can function normally in their absence. But while plasmids have only a few genes, they can confer important capabilities for the cell, such as antibiotic resistance. Plasmids replicate independently of the cell and can be lost (known as curing), either spontaneously or due to exposure to adverse conditions, such as UV light, thymine starvation, or growth above optimal conditions. Some plasmids, known as episomes, can be integrated into the cell chromosome where the genes will be replicated during cell division. Endospores are only formed by a few gram positive genera and provide the cell with resistance to a wide variety of harsh conditions, such as starvation, extremes in temperature, exposure to drying, UV light, chemicals, enzymes, and radiation. While the vegetative cell is the active form for bacterial cells (growing, metabolizing, etc), the endospore can be thought of as a dormant form of the cell. It allows for survival of adverse conditions, but it does not allow the cell to grow or reproduce.

In order to be so incredibly resistant to so many different substances and environmental conditions, many different layers are necessary. The bacterial endospore has many different layers, starting with a core in the center. The core is the location of the nucleoid, ribosomes, and cytoplasm of the cell, in an extremely dehydrated form. It typically contains only 25% of the water found in a vegetative cell, increasing heat resistance. The DNA is further protected by the presence of small acid-soluble proteins (SASPs), which stabilize the DNA and protect it from degradation. DNA stabilization is increased by the presence of dipicolinic acid complexed with calcium (Ca-DPA), which inserts between the DNA bases. The core is wrapped in an inner membrane that provides a permeability barrier to chemicals, which is then surrounded by the cortex, a thick layer consisting of peptidoglycan with less cross-linking than is found in the vegetative cell. The cortex is wrapped in an outer membrane.Lastly are several spore coats made of protein, which provide protection from environmental stress such as chemicals and enzymes.

Sporulation, the conversion of vegetative cell into the highly protective endospore, typically occurs when the cell’s survival is threatened in some way. The actual process is very complex and typically takes several hours until completion. Initially the sporulating cells replicates its DNA, as if it were about to undergo cell division. A septum forms asymmetrically, sequestering one copy of the chromosome at one end of the cell (called the forespore). Synthesis of endospore-specific substances occurs, altering the forespore and leading to the development of the layers specific for an endospore, as well as dehydration. Eventually the “mother cell” is lyses, allowing for the release of the mature endospore into the environment. Conversion from endospore to vegetative cell

The endospore remains dormant until environmental conditions improve, causing a chemical change that initiates gene expression. There are three distinct stages in the conversion from an endospore to the metabolically active vegetative cells: 1) activation, a preparation step that can be initiated by the application of heat; 2) germination, when the endospore becomes metabolically active and begins to take on water; 3) outgrowth, when the vegetative cell fully emerges from the endospore shell.