Antimicrobial peptides are an evolutionarily conserved component of the innate immune response and are found among all classes of life.

Antimicrobial peptides (also called host defense peptides) are an evolutionarily conserved component of the innate immune response and are found among all classes of life. Fundamental differences exist between prokaryotic and eukaryotic cells that may represent targets for antimicrobial peptides. These peptides are potent, broad spectrum antibiotics which demonstrate potential as novel therapeutic agents. Antimicrobial peptides have been demonstrated to kill Gram negative and Gram positive bacteria (including strains that are resistant to conventional antibiotics), mycobacteria (including Mycobacterium tuberculosis), enveloped viruses, fungi and even transformed or cancerous cells. Unlike the majority of conventional antibiotics, it appears as though antimicrobial peptides may also have the ability to enhance immunity by functioning as immunomodulators.

Antimicrobial peptides are a unique and diverse group of molecules, which are divided into subgroups on the basis of their amino acid composition and structure. Antimicrobial peptides generally consist of between 12 and 50 amino acids. These peptides include two or more positively charged residues provided by arginine, lysine or, in acidic environments, histidine, and a large proportion (generally >50%) of hydrophobic residues. The secondary structures of these molecules follow 4 themes, including: 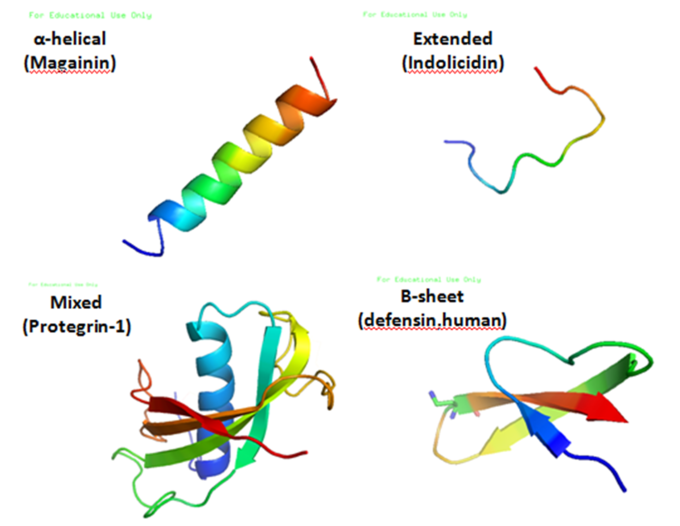 Many of these peptides are unstructured in free solution, and fold into their final configuration upon partitioning into biological membranes. It contains hydrophilic amino acid residues aligned along one side and hydrophobic amino acid residues aligned along the opposite side of a helical molecule. This amphipathicity of the antimicrobial peptides allows the partition of the membrane lipid bilayer. The ability to associate with membranes is a definitive feature of antimicrobial peptides, although membrane permeabilisation is not necessary. These peptides have a variety of antimicrobial activities ranging from membrane permeabilization to action on a range of cytoplasmic targets.

The modes of action by which antimicrobial peptides kill bacteria is varied and includes disrupting membranes, interfering with metabolism, and targeting cytoplasmic components. The initial contact between the peptide and the target organism is electrostatic, as most bacterial surfaces are anionic, or hydrophobic, such as in the antimicrobial peptide Piscidin. Their amino acid composition, amphipathicity, cationic charge, and size allow them to attach to and insert into membrane bilayers to form pores by ‘barrel-stave’, ‘carpet’ or ‘toroidal-pore’ mechanisms. Alternately, they may penetrate into the cell to bind intracellular molecules which are crucial to cell living. Intracellular binding models include inhibition of cell wall synthesis, alteration of the cytoplasmic membrane, activation of autolysin, inhibition of DNA, RNA, and protein synthesis, and inhibition of certain enzymes. However, in many cases, the exact mechanism of killing is not known. One emerging technique for the study of such mechanisms is dual polarisation interferometry. In contrast to many conventional antibiotics these peptides appear to be bacteriocidal (bacteria killing) instead of bacteriostatic (bacteria growth inhibiting). In general the antimicrobial activity of these peptides is determined by measuring the minimal inhibitory concentration (MIC), which is the lowest concentration of drug that inhibits bacterial growth.

In addition to killing bacteria directly, they have been demonstrated to have a number of immunomodulatory functions that may be involved in the clearance of infection, including the ability to:

Animal models indicate that host defense peptides are crucial for both prevention and clearance of infection. It appears as though many peptides initially isolated and termed as “antimicrobial peptides” have been shown to have more significant alternative functions in vivo (e.g. hepcidin).