Ans: O on H2O attacks the P in SM, forming ceramide and phosphocholine. Ans: Make liposomes using detergent dialysis method or by extrusion through membranes. Either way, neuraminidase would be found both encapsulated and outside of the membrane. Small MW molecules on the outside of the vesicles could be removed by dialysis since the vesicles in the dialysis bag would be too big to pass through pores in the bag. The easiest way would be to use gel fitration (size exclusion) chromatography, which could easily separate the relative huge liposomes (which would elute first) from the relatively small protein (which elutes later). 4. The water soluble enzyme sphingomyelinase (SMase) was added to a suspension of these vesicles. The extent of hydrolysis of as a function of time (from 0 to 60 minutes) and the effect on hydrolysis of excess amounts of the nonionic detergent Triton X-100 with time (60-90 minutes) are shown below in Figure 1A. Previous experiments had shown that this Triton X-100 concentration did not inhibit sphingomyelinase or neuraminidase.

Ans: Addition of sphingomyelinase (1.6 units/ml) to a suspension of these vesicles induced SM hydrolysis, which reached equilibrium after 20 min, when 40% of SM had been hydrolyzed (Figure 1A). Addition of Triton X-100 after 60 min caused membrane disruption, but SM hydrolysis did not go beyond 50% at 30 min after detergent addition. Suggest that SMase must be membrane bound to cleave SM. The 50% saturation level suggest that only SM in the outer leaftlet was cleaved, and not SM in the inner leaflet.

5. The same experiment was repeated (addition of SMase to the LUVs) but instead of monitoring SM hydrolysis, glycoyl-neuraminic acid cleavage from the added GM3 was studied. Aliquots of the vesicle suspension were removed at fixed times after the addition of sphingomyelinase and analyzed for the GM3 product of neuraminidase activity. The results are shown in Figure 1B below.

Ans: GM3 was hydrolyzed almost in parallel with SM, except that no saturation was observed (Figure 1B). After the addition of Triton X-100, virtually all GM3 was cleaved by neuraminidase, a water soluble enzyme that doesn't need an intact bilayer to cleave GM3. One interpretation of these data is that, as a consequence of sphingomyelinase activity, GM3 was flipping to the inner leaflet, thus becoming accessible to neuraminidase. 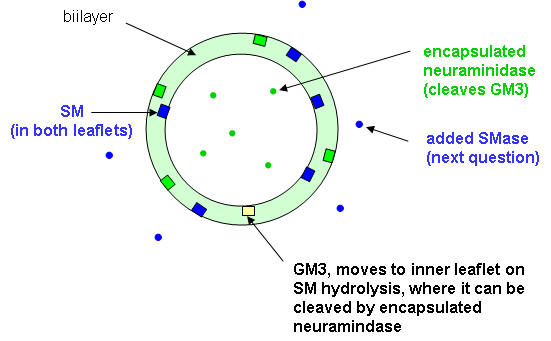 7. Vesicles containing GM3 but not sphingomyelinase or internal neuraminidase were treated with neuraminidase at the concentration found in the filtrates above.

Compare the times course of GM3 hydrolysis is totally different from the one depending on sphingomyelinase activity. Suggest a hypothesis to account for the enhanced hydrolysis of GM3 in the presence of SMase. Draw a cartoon diagram in your explanation.

Ans: No significant differences were found between the fractions of hydrolyzed GM3 in the presence and absence of antibody. We concluded that GM3 hydrolysis was catalyzed by neuraminidase inside the vesicles; thus, sphingomyelinase activity had caused GM3 to flip to the inside lipid monolayer

Excess dithionite was removed immediately by gel filtration. Note: any remaining flourescence is from inner leaflet NBD-PE. LUVs were then treated with sphingomyelinase. Enzyme activity was the same as described in Figure 1A. Aliquots were removed from the reaction mixture at regular intervals and mixed with an impermeant nonspecific antibody, IgG, labeled with another fluorophore, rhodamine. When NBD is excited with UV light, it fluorescence emission wavelength overlaps the excitation wavelength of rhodamine. If the two fluorphores are close enough, excitation of NBD can lead to rhodamine fluorescence emission, in a process called fluorescence resonance energy transfer.

Results are shown in the Figure 3 below. Control experiments, also shown in the figure, indicated that in the absence of sphingomyelinase, NBD-PE fluorescence remained invariant with time.

Ans: As the sphingomyelinase reaction proceeded, NBD-PE flopped toward the outer monolayer, and energy transfer to Rho-IgG could take place. Consequently, when the fluorescence of NBD-PE was excited, its emission intensity decreased with time, and the emission intensity of Rho-IgG increased accordingly. The corresponding data are shown in Figure 3. Control experiments, also shown in the figure, indicated that in the absence of sphingomyelinase, NBD-PE fluorescence remained invariant with time. Thus, fluorescence energy transfer measurements confirm that sphingomyelinase activity induces the transmembrane movement of lipids, in this case, the movement of NBD-PE from the inner to outer leaftle.