The first law of thermodynamics deals with the total amount of energy in the universe. It states that this total amount of energy is constant. In other words, there has always been, and always will be, exactly the same amount of energy in the universe. According to the first law of thermodynamics, energy may be transferred from place to place, but it cannot be created or destroyed. The transfers of energy take place around us all the time. Light bulbs transfer energy from an electrical power station into heat and photons of light. Gas stoves transfer energy stored in the bonds of chemical compounds into heat and light. Heat, by the way, is the amount of energy transferred from one system to another because of a temperature difference. Plants perform one of the most biologically useful energy transfers on earth: they transfer energy in the photons of sunlight into the chemical bonds of organic molecules. In every one of these cases energy is neither made or destroyed and we must try to account for all of the energy when we examine some of these reactions.

1st Law and the Energy Story

The first law of thermodynamics is deceptively simple. Students often understand that energy cannot be created or destroyed. Yet, when describing an energy story of a process they often make the mistake of saying things such as "energy is produced from the transfer of electrons from atom A to atom B". While most of us will understand the point the student is trying to make, the wrong words are being used. Energy is not made or produced, it is simply transferred. To be consistent with the first law, when telling an energy story, make sure that you try to explicitly track all of the places that ALL of the energy in the system at the start of a process goes by the end of a process.

An important concept in physical systems is that of entropy. Entropy is related to the with the ways in which energy can be distributed or dispersed within the particles of a system. The 2nd Law of Thermodynamics states that entropy is always increasing in a system AND its surroundings (everything outside the system). This idea helps explain the directionality of natural phenomena. In general, the notion is that the directionality comes from the tendency for energy in a system to move towards a state of maximal dispersion. The 2nd law, therefore, means that in any transformation we should look for an overall increase in entropy (or dispersion of energy), somewhere. A idea that is associated with increased dispersion of energy in a system or its surroundings is that as dispersion increases the ability of the energy to be directed towards work decreases.

There will be many examples of where the entropy of a system decreases. To be consistent with the second law, however, we must try to find something else (likely a closely connected system in the surroundings) that must compensate for the "local" decrease in entropy with an equal or greater increase in entropy.

The entropy of a system can increase when:(a) it gains energy; (b) a change of state occurs from solid to liquid to gas; (c) mixing of substances occurs; (d) the number of particles increases during a reaction.

Biological systems, on the surface, see to defy the Second Law of Thermodynamics. They don't. Why? 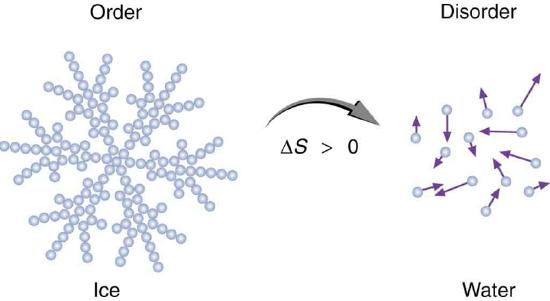 Figure 1: An increase in disorder can happen in different ways. An ice cube melting on a hot sidewalk is one example. Here, ice is displayed as a snowflake, with organized, structured water molecules forming the snowflake. Over time, the snowflake will melt into a pool of disorganized, freely moving water molecules.
Source: https://www.boundless.com/physics/te...rder-417-6459/

A fine point. The figure above discusses order and disorder and shows that this is somehow related to a change in entropy (ΔS). It is common to describe entropy as a measure of order as a way to simplify the more concrete description relating entropy to the number of states in which energy can be dispersed in a system. While the idea of measuring order to define entropy has some flaws, it is sometimes a useful, if imperfect, proxy. Consider the figure above. Here order serves as a good proxy for approximating the number of ways to distribute energy in the system. Can you describe why this is the case?

If we consider the first and second laws together (the conservation of energy and the need for entropy to increase if a process happens) we come to a useful conclusion. In any process where energy is transferred or redistributed within a system entropy must increase. This increase in entropy is related to how "useful" the energy is to do work (generally becoming less available as entropy increases). So, we can conclude that in any transformation we consider that while all of the energy must be conserved, if the required change increase entropy it means that some of the energy will become distributed in a way that makes it less useful for work. In many cases, particularly in biology, some of the increase in entropy can be tracked to a transfer of energy to heat in the environment.