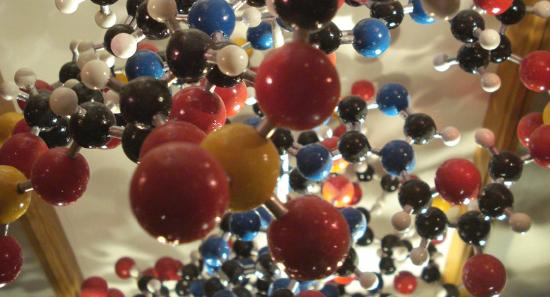 Atoms are the building blocks of molecules found in the universe—air, soil, water, rocks . . . and also the cells of all living organisms. In this model of an organic molecule, the atoms of carbon (black), hydrogen (white), nitrogen (blue), oxygen (red), and sulfur (yellow) are shown in proportional atomic size. The silver rods represent chemical bonds. (credit: modification of work by Christian Guthier)

The Structure of an Atom

The chemistry discussed in BIS2A requires us to use a model for an atom. While there are more sophisticated models, the atomic model used in this course makes the simplifying assumption that the standard atom is composed of three sub-atomic particles, the proton, the neutron, and the electron. Protons and neutrons have a mass of approximately 1 atomic mass unit (a.m.u.). One atomic mass unit is approximately 1.660538921 ×10-27kg - roughly 1/12 of the mass of a carbon atom (see table below for more precise value). The mass of an electron is 0.000548597 a.m.u. or 9.1 x 10-31kg. Neutrons and protons reside at the center of the atom in a region call the nucleus while the electrons orbit around the nucleus in zones called orbitals, as illustrated below. The only exception to this description is the hydrogen (H) atom, which is composed of one proton and one electron with no neutrons. An atom is assigned an atomic number based on the number of protons in the nucleus. Neutral carbon (C), for instance has 6 neutrons, 6 protons and 6 electrons. It has an atomic number of 6 and a mass of slightly more than 12 a.m.u.

This table reports the charge and location of three subatomic particles - the neutron, proton, and electron. a.m.u. = atomic mass unit (aka. dalton - symbol Da) - this is defined as approximately one twelfth of the mass of a neutral carbon atom or 1.660538921 × 10−27 kg. This is roughly the mass of a proton or neutron. Elements, such as helium, depicted here, are made up of atoms. Atoms are made up of protons and neutrons located within the nucleus and electrons surrounding the nucleus in regions called orbitals. (Note: This figure depicts a Bohr model for an atom - we could use a new open-source figure that depicts a more modern model for orbitals. If anyone finds one please forward it.)
Source:(https://commons.wikimedia.org/wiki/F...um_atom_QM.svg)
By User:Yzmo (Own work) [GFDL (http://www.gnu.org/copyleft/fdl.html) or CC-BY-SA-3.0 (http://creativecommons.org/licenses/by-sa/3.0/)], via Wikimedia Commons

The typical atom has a radius of 1-2 angstroms(Å). 1Å = 1 x 10-10m. The typical nucleus has a radius 1 x 10-5Å or 10,000 smaller than the radius of the whole atom. By analogy, a typical large exercise ball has a radius of 0.85m. If this were an atom, the nucleus would have a radius about 1/2 to 1/10 of your thinnest hair. All of that extra volume is occupied by the electrons in regions called orbitals. For an ideal atom, orbitals are probabilistically defined regions in space around the nucleus in which an electron can be expected to be found.

The properties of living and non-living materials are determined to a large degree by the composition and organization of their constituent elements. Five elements are common to all living organisms: Oxygen (O), Carbon (C), Hydrogen (H), Phosphorous (P), and Nitrogen (N). Other elements like Sulfur (S), Calcium (Ca), Chloride (Cl), Sodium (Na), Iron (Fe), Cobalt (Co), Magnesium, Potassium (K), and several other trace elements are also necessary for life but are typically found in far less abundance than the "top five" noted above. As a consequence, life's chemistry - and by extension the chemistry of relevance in Bis2A, largely focuses on common arrangements of and reactions between the "top five" core atoms of biology. A table illustrating the abundance of elements in the human body. A pie chart illustrating the relationships in abundance between the 4 most common elements.
Credit: Data from Wikipedia (http://en.wikipedia.org/wiki/Abundan...mical_elements); chart created by Marc T. Facciotti