Nucleic acids are molecules made up of nucleotides that carry the genetic blueprint of a cell. Each nucleotide is made up of a pentose sugar, a nitrogenous base, and a phosphate group. There are two types of nucleic acids: DNA and RNA. DNA carries the genetic blueprint of the cell and is passed on from parents to offspring. Double stranded DNA has a helical structure with the two strands running in opposite directions. The two strands are connected by hydrogen bonds, and chemically complementary to each other. Interactions known as "base stacking" interactions also help stabilize the double helix. RNA can either be single-stranded, or double-stranded and is made of a pentose sugar (ribose), a nitrogenous base, and a phosphate group. RNA is involved in protein synthesis as a messenger, the regulation of protein synthesis, other regulatory processes and some catalytic activity. Messenger RNA (mRNA) is copied from the DNA, is exported from the nucleus to the cytoplasm, and contains information for the construction of proteins. Ribosomal RNA (rRNA) is a part of the ribosomes at the site of protein synthesis, whereas transfer RNA (tRNA) carries the amino acid to the site of protein synthesis. microRNA regulates the use of mRNA for protein synthesis.

DNA and RNA are made up of monomers known as nucleotides. Individual nucleotides condense with one another other to form a nucleic acid polymer. Each nucleotide is made up of three components: a nitrogenous base (for which there are five different types), a pentose (five-carbon) sugar, and a phosphate group. These are depicted below. The nitrogenous bases of nucleotides are organic molecules and are so named because they contain carbon and nitrogen. They are bases because they contain an amino group that has the potential of binding an extra hydrogen, and thus acting as a base by decreases the hydrogen ion concentration in the local environment. Each nucleotide in DNA contains one of four possible nitrogenous bases: adenine (A), guanine (G) cytosine (C), and thymine (T). RNA contains adenine (A), guanine (G) cytosine (C), and uracil (U) instead of thymine (T).

Take a moment to review the figure above of the nitrogenous base: Identify functional groups as described in class. For each functional group identified, describe what type of chemistry you expect it to be involved in. If hydrogen bonding, does the functional group act as a donor or acceptor?

The term "high energy bond" is used A LOT in biology. It is, however, one of those shortcuts we referred to earlier. The term refers to the amount of negative free energy associated with the HYDROLYSIS of that bond! The water is important. While we have tried to minimize the use of the vernacular "high energy" when referring to bonds, keep the above in mind when you are reading or listening to discussions in biology. DNA has a double-helix structure (shown below). The sugar and phosphate lie on the outside of the helix, forming the backbone of the DNA. The nitrogenous bases are stacked in the interior, like the steps of a staircase, in pairs; the pairs are bound to each other by hydrogen bonds. Every base pair in the double helix is separated from the next base pair by 0.34 nm. The two strands of the helix run in opposite directions, meaning that the 5′ carbon end of one strand will face the 3′ carbon end of its matching strand. This is referred to as antiparallel orientation. 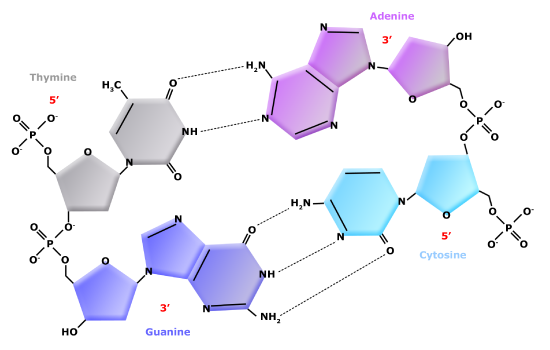 Nucleic acids play a variety of roles in in cellular process besides being the information storage molecule. Nucleic acids, RNA in particular, are believed to be the first biologically active molecules during a period referred to as the "RNA world" when catalytic RNA were thought to serve the dual role as catalysts and information storing molecules. Remnants of the RNA world can be seen in many riboprotein complexes essential for life. In these RNA-Protein complexes the RNA serves both catalytic and structural roles. Examples include of such complexes include, ribosomes, RNases, splicesosome complexes and Telomerase. Nucleotides such as ATP and GTP also serve as mobile short-term energy transport units for the cell. Nucleotides also play important roles as co-factors (in addition to energy vehicles) for many enzymatic reactions. Like lipids, proteins and carbohydrates, nucleic acids and nucleotides play a wide variety of roles in the cell.