Lipids are a class of macromolecules that are hydrophobic in nature. Major types include fats and oils, waxes, phospholipids, and steroids. Depending on their physical properties (encoded by their chemical structure), lipids can serve many functions in biological systems. A number of lipids function as biological stores of energy (e.g. fat). Some lipids serve important roles in the maintenance and properties of biological barriers (e.g. lipids in the cell membrane, waxy coatings on leaves). Various other lipids serve as important messaging molecules that allow cells to communicate to one another (e.g. steroids, prostaglandins). Here we explore the structure of lipids and their chemical properties and show how these properties are related to their functions in biology.

Lipids include a diverse group of compounds. Many lipids are at their core hydrocarbons, molecules that include many nonpolar carbon–carbon or carbon–hydrogen bonds. The abundance of non polar functional groups give lipids a degree of hydrophobic (“water fearing”) character and most lipids have low solubilities in water. Lipids include molecules like fats, oils, waxes, phospholipids, and steroids. They perform many different important functions in biology (energy storage, insulation, act as barrier, signaling). The diversity of lipid molecules and their range of biological activities is also large - perhaps surprisingly so to an new student of biology. Let's explore a bit.

A common fat molecule or triglyceride is a molecule derived from two types of molecular components — a polar "head" group and a non-polar "tail" group. Glycerol, a carbohydrate, is an organic compound composed of three carbons, five hydrogens, and three hydroxyl (OH) groups. The "head" group of a triglyceride is derived from a single glycerol molecule. The non-polar fatty acid "tail" group consists of three hydrocarbons (a functional group composed of C-H bonds) that also have a polar carboxyl functional group (hence the term "fatty acid" - the carboxyl group is acidic at most biologically relevant pHs). The number of carbons in the fatty acid may range from 4 to 36; most common are those containing 12–18 carbons. These types of molecules are generally hydrophobic and while they have numerous functions are probably best known for their roles in body fat and plant oils. The models of the triglycerides shown above show the relative positions of the atoms in the molecule. If you Google for images of triglycerides you will find some models that show the phospholipid tails in wildly different positions. What is equally well represented by the model in the book and others on-line? Using your intuition, give an opinion for which model you think is a more correct representation of real-life. Why?

The physical properties of different natural fats like butter, canola oil, etc. (composed mostly of triglycerides) are very dependent on two factors:
1) The number of carbons in the hydrocarbon chains
2) The number of desaturations (double bonds) in the carbon chains.
The first factor influences how these molecules interact with each other and with water while the second factor influences their shape dramatically. The introduction of a double bond causes a "kink" in the otherwise relatively "straight" hydrocarbon (depicted in a slightly exaggerated figure below). Based on what you can surmise from this brief description, propose a rationale - in your own words - to explain why butter is solid at room temperature while vegetable oil is liquid.
Fact: butter has a greater percentage of longer and saturated hydrocarbons in its triglycerides than does vegetable oil. Steroids are lipids with a fused ring structure. Although they do not resemble the other lipids discussed here, they are designated a lipid because they are also largely composed of carbons and hydrogens, are hydrophobic and insoluble in water. All steroids have four linked carbon rings and several of them, like cholesterol, have a short tail. Many steroids also have the –OH functional group, which puts them in the alcohol classification (sterols). Cholesterol is the most common steroid. Cholesterol is mainly synthesized in the liver and is the precursor to many steroid hormones such as testosterone and estradiol, which are secreted by the gonads and endocrine glands. It is also the precursor to Vitamin D. Cholesterol is also the precursor of bile salts, which help in the emulsification of fats and their subsequent absorption by cells. Although cholesterol is often spoken of in negative terms, it is necessary for proper functioning of many animal cells. It is a component of the plasma membrane of animal cells and is thought to play a variety of roles that stem from its influence on modulating membrane structure, organization and fluidity. 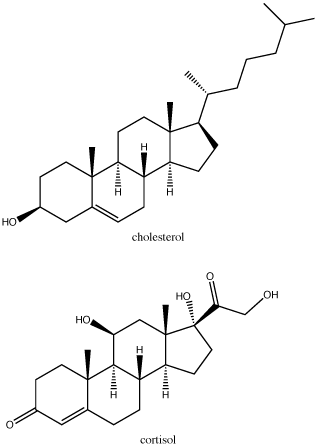 Phospholipids are major constituents of the cell membrane, the outermost layer of cells. Like fats, they are composed of fatty acid chains attached to a polar head group. Specifically, there are two fatty acid tails and a phosphate group as the polar head group. The phospholipid is an amphipathic molecule, meaning it has a hydrophobic part and a hydrophilic part. The fatty acid chains are hydrophobic and cannot interact with water, whereas the phosphate-containing head group is hydrophilic and interacts with water. Can you identify the functional groups on the phospholipid below that give each part of the phospholipid its properties?

Make sure to note in the figure below that the phosphate group has an R-group linked to one of the oxygen atoms. R is a variable commonly used in these types of diagrams to indicate that some other atom or molecule is bound at that position. That part of the molecule can be different in different phospholipids - and will impart some different chemistry to the whole molecule. At the moment, however, you are responsible for being able to recognize this type of molecule (no matter what the R group is) because of the common core elements - the glycerol backbone, the phosphate group, and the two hydrocarbon tails. Above it says that if you were to take some pure phospholipids and drop them into water that some if it would spontaneously (on its own) form into micelles. This sounds a lot like something that could be described by an energy story. Go back to the energy story rubric and try to start creating an energy story for this process - I expect that the steps involving the description of energy might be difficult at this point (we'll come back to that later) but you should be able to do at least the first three steps. You can constructively critique (politely) each other's work to create an optimized story.

For an additional perspective on lipids, explore the interactive animation “Biomolecules: The Lipids”. For more information on lipids, please visit the UCD Chemwiki site at Chemwiki lipids

Another perspective on lipids, that contains a variety of animations to help you, is the following link from Carnegie Mellon University, Department of Biological Sciences flash tutorial on lipids.