The oxidation of a variety of small organic compounds is a process that is utilized by many organisms to garner energy for cellular maintenance and growth. The oxidation of glucose via glycolysis is one such pathway. Several key steps in the oxidation of glucose to pyruvate involve the reduction of the electron/energy shuttle NAD+ to NADH. At the end of section 5.3 you were posed with the challenge of trying to figure out what options the cell might reasonably have to re-oxidize the NADH to NAD+ in order to avoid consuming the available pools of NAD+ and thus stopping glycolysis. Put differently, during glycolysis cells can generate large amounts of NADH and slowly exhaust their supplies of NAD+. If glycolysis is to continue, the cell must find a way to regenerate NAD+, either by synthesis or by some form of recycling.

In the absence of any other process - that is, if we consider glycolysis alone - it is not immediately obvious what the cell might do. One choice is to try putting the electrons that were once stripped off of the glucose derivatives right back onto the downstream product, pyruvate or one of its derivatives. We can generalize the process by describing it as the returning of electrons to the molecule that they were once removed from, usually to restore pools of a oxidizing agent. This, in short, is fermentation. As we will discuss in a different section, the process of respiration can also regenerate the pools of NAD+ from NADH. Cells lacking respiratory chains or in conditions where using the respiratory chain is unfavorable may choose fermentation as an alternative mechanism for garnering energy from small molecules.

An everyday example of a fermentation reaction is the reduction of pyruvate to lactate by the lactic acid fermentation reaction. This reaction should be familiar to you, it occurs in our muscles when we exert ourselves during exercise. When we exert ourselves our muscles require large amounts of ATP to perform the work we are demanding of them. As the ATP is consumed, the muscle cells are unable to keep up with the demand for respiration, O2 becomes limiting and NADH accumulates. Cells need to get rid of the excess and regenerate NAD+, so pyruvate serves as an electron acceptor, generating lactate and oxidizing NADH to NAD+. Many bacteria use this pathway as a way to complete the NADH/NAD+ cycle. You may be familiar with this process from in products like sauerkraut and yogurt. The chemical reaction of lactic acid fermentation is the following: 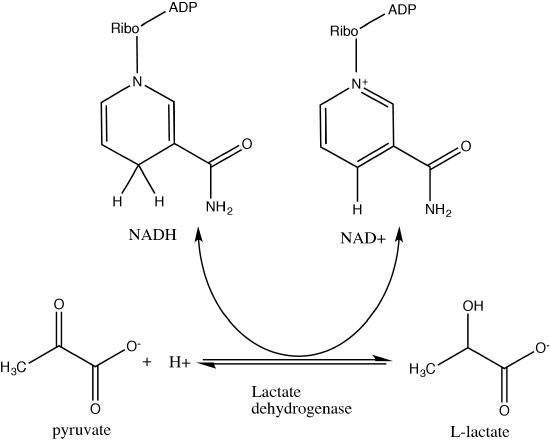 The reactants are pyruvate, NADH and a proton. The products are lactate and NAD+. The process of fermentation results in the reduction of pyruvate to form lactic acid and the oxidation of NADH to form NAD+. Electrons from NADH and a proton are used to reduce pyruvate into lactate. If we examine a table of standard reduction potential we see under standard conditions that a transfer of electrons from NADH to pyruvate to form lactate is exergonic and thus thermodynamically spontaneous. The reduction and oxidation steps of the reaction are coupled and catalyzed by the enzyme lactate dehydrogenase. Write a complete energy story for alcohol fermentation. Propose possible benefits of this type of fermentation for the single celled yeast organism.

While the lactic acid fermentation and alcohol fermentation pathways described above are examples, there are many more reactions (too numerous to go over) that Nature has evolved to complete the NADH/NAD+ cycle. It is important that you understand the general concepts behind these reactions. In general, cells try to maintain a balance or constant ratio between NADH and NAD+; when this ratio becomes unbalanced, the cell compensates by modulating other reactions to compensate. The only requirement for a fermentation reaction is that it uses a small organic compound as an electron acceptor for NADH and regenerates NAD+. Other familiar fermentation reactions include, ethanol fermentation (as in beer and bread) and propionic fermentation (it's what makes the holes in swiss cheese) and malolactic fermentation (it's what gives chardonnay is more mellow flavor, more conversion of malate to lactate the softer the wine). In the figure below you can see a large variety of fermentation reactions that various bacteria use to reoxidize NADH to NAD+. All of these reactions start with pyruvate or a derivative of pyruvate matabolism, such as oxaloacetate, or formate. Pyruvate is produced from the oxidation of sugars (glucose or ribose) or other small reduced organic molecules. It should also be noted that other compounds can be used as fermentation substrates besides pyruvate and its derivatives. These include: methane fermentation, sulfide fermentation, or the fermentation of nitrogenous compounds such as amino acids. You are not expected to memorize all of these pathways. You are, however, expected to recognize a pathway that returns electrons to products of the compounds that were originally oxidized to recycle the NAD+/NADH pool and to associate that process with fermentation.

Various fermentation pathways using pyruvate as the initial substrate. In the figure, pyruvate is reduced to a variety of products via different and sometimes multistep (dashed arrows represent possible multiple step processes) reactions. All details are deliberately not shown. The key point is to appreciate that fermentation is a broad term not solely associated with the conversion of pyruvate to lactic acid or ethanol.
Source: Original work Marc T. Facciotti

Fermentation occurs in the absence of molecular oxygen (O2). It is an anaerobic process. Notice there is no O2 in any of the fermentation reactions shown above. Many of these reactions are quite ancient, hypothesized to be some of the first energy generating metabolic reactions to evolve. This makes sense if we consider the following:

If the hypothesis is correct, that substrate level phosphorylation and fermentation reactions co-evolved and were the first forms of energy metabolism that cells used to generate ATP, then what would be the consequences of such reactions over time? What if these were the only forms of energy metabolism available over hundreds of thousands of years? What if cells were isolated in a small closed environment? What if the small reduced substrates were not being produced at the same rate of consumption during this time?

Imagine the world where fermentation is the primary mode for extracting energy from small molecules. As populations thrive, they reproduce and consume the abundance of small reduced organic molecules in the environment, producing acids. One consequence is the acidification (decrease of pH) of the environment, including the internal cellular environment. This is not so good, since changes in pH can have a profound influence on the function and interactions among various biomolecules. Therefore mechanisms needed to evolved that could remove the various acids. Fortunately, in an environment rich in reduced compounds, substrate level phosphorylation and fermentation can produce large quantities of ATP.