In a previous discussion of energy metabolism, we explored substrate level phosphorylation (SLP) and fermentation reactions. One of the questions in the discussion points for that discussion was: what are the short- and long-term consequences of SLP to the environment? We discussed how cells needed to co-evolve mechanisms in order to remove protons from the cytosol (interior of the cell), which led to the evolution of the F0F1-ATPase, a multi-subunit enzyme that translocates protons from the inside of the cell to the outside of the cell by hydrolyzing ATP, as shown below in the first picture below. This arrangement works as long as small reduced organic molecules are freely available, making SLP and fermentation advantageous. However, as these biological processes continue, the small reduced organic molecules begin to be used up, and their concentration decreases; this puts a demand on cells to be more efficient.

One source of potential "ATP waste" is in the removal of protons from the cell's cytosol; organisms that could find other mechanisms to expel accumulating protons while still preserving ATP could have a selective advantage. It is hypothesized that this selective evolutionary pressure potentially led to the evolution of the first membrane-bound proteins that used red/ox reactions as their energy source (depicted in second picture) to pump the accumulating protons. Enzymes and enzyme complexes with these properties exist today in the form of the electron transport complexes like Complex I, the NADH dehydrogenase. Figure 2. As small reduced organic molecules become limited, organisms that can find alternative mechanisms to remove protons from the cytosol may have an advantage. The evolution of a proton translocator that uses red/ox reactions rather than ATP hydrolysis could substitute for the ATPase.

Continuing with this line of logic, if organisms evolved that could now use red/ox reactions to translocate protons across the membrane they would create a an electrochemical gradient, separating both charge (positive on the outside and negative on the inside; an electrical potential) and pH (low pH outside, higher pH inside). With excess protons on the outside of the cell membrane, and the F0F1-ATPase no longer consuming ATP to translocate protons, it is hypothesized that the electrochemical gradient could then be used to power the F0F1-ATPase "backwards" — that is, to form or produce ATP by using the energy in the charge/pH gradients set up by the red/ox pumps (as depicted below). This arrangement is called an electron transport chain (ETC). 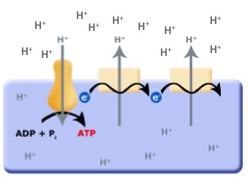 Figure 3. The evolution of the ETC; the combination of the red/ox driven proton translocators coupled to the production of ATP by the F0F1-ATPase.

If you're interested in the story of the evolution of electron transport chains, check out this more in-depth discussion of the topic at NCBI.

The sun emits an enormous amount of electromagnetic radiation (solar energy) that spans a broad swath of the electromagnetic spectrum, the range of all possible radiation frequencies. When solar radiation reaches Earth, a fraction of this energy interacts with and may be transferred to the matter on the planet. This energy transfer results in a wide variety of different phenomena, from influencing weather patterns to driving a myriad of biological processes. In BIS2A, we are largely concerned with the latter, and below, we discuss some very basic concepts related to light and its interaction with biology.

First, however we need to refresh a couple of key properties of light:

The distance between peaks in a wave is referred to as the wavelength and is abbreviated with the greek letter lambda (Ⲗ). Attribution: Marc T. Facciotti (original work) 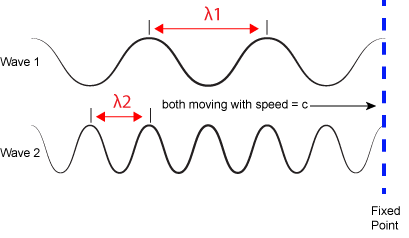 The inverse proportionality of frequency and wavelength. Wave 1 has a wavelength that is 2x that of wave 2 (Ⲗ1 > Ⲗ2). If the two waves are traveling at the same speed (c)—imagine that both of the whole lines that are drawn are dragged past the fixed vertical line at the same speed —then the number of times a wave peak passes a fixed point is greater for wave 2 than wave 1 (f2 > f1). Attribution: Marc T. Facciotti (original work)

3. Finally, each frequency (or wavelength) of light is associated with a specific energy. We'll call energy "E". The relationship between frequency and energy is:

where h is a constant called the Planck constant (~6.626x10-34 Joule•second when frequency is expressed in cycles per second). Given the relationship between frequency and wavelength, you can also write E = h*c/Ⲗ. Therefore, the larger the frequency (or shorter the wavelength), the more energy is associated with a specific "color". Wave 2 in the figure above is associated with greater energy than wave 1.

At the center of the biological interactions with light are groups of molecules we call organic pigments. Whether in the human retina, chloroplast thylakoid, or microbial membrane, organic pigments often have specific ranges of energy or wavelengths that they can absorb. The sensitivity of these molecules for different wavelengths of light is due to their unique chemical makeups and structures. A range of the electromagnetic spectrum is given a couple of special names because of the sensitivity of some key biological pigments: The retinal pigment in our eyes, when coupled with an opsin sensor protein, “sees” (absorbs) light predominantly between the wavelengths between of 700 nm and 400 nm. Because this range defines the physical limits of the electromagnetic spectrum that we can actually see with our eyes, we refer to this wavelength range as the "visible range". For similar reasons, as plants pigment molecules tend to absorb wavelengths of light mostly between 700 nm and 400 nm, plant physiologists refer to this range of wavelengths as "photosynthetically active radiation". The structure of heme and chlorophyll a molecules. The common porphyrin ring is colored in red. Attribution: Marc T. Facciotti (original work)

Carotenoids are the red/orange/yellow pigments found in nature. They are found in fruit—the red of tomato (lycopene), the yellow of corn seeds (zeaxanthin), or the orange of an orange peel (β-carotene)—which are used as biological "advertisements" to attract seed dispersers (animals or insects that may carry seeds elsewhere). In photosynthesis, carotenoids function as photosynthetic pigments. In addition, when a leaf is exposed to full sun, that surface is required to process an enormous amount of energy; if that energy is not handled properly, it can do significant damage. Therefore, many carotenoids help absorb excess energy in light and safely dissipate that energy as heat.

Flavonoids are a very broad class of compounds that are found in great diversity in plants. These molecules come in many forms but all share a common core structure shown below. The diversity of flavonoids comes from the many different combinations of functional groups that can "decorate" the core flavone. 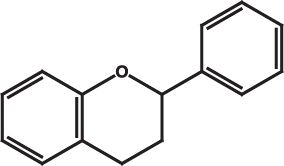 The core ring structure of flavans. (a) Chlorophyll a, (b) chlorophyll b, and (c) β-carotene are hydrophobic organic pigments found in the thylakoid membrane. Chlorophyll a and b, which are identical except for the part indicated in the red box, are responsible for the green color of leaves. Note how the small amount of difference in chemical composition between different chlorophylls leads to different absorption spectra. β-carotene is responsible for the orange color in carrots. Each pigment has a unique absorbance spectrum (d).

Not all photosynthetic organisms have full access to sunlight. Some organisms grow underwater where light intensity and available wavelengths decrease and change, respectively, with depth. Other organisms grow in competition for light. For instance, plants on the rainforest floor must be able to absorb any bit of light that comes through because the taller trees absorb most of the sunlight and scatter the remaining solar radiation. To account for these variable light conditions, many photosynthetic organisms have a mixture of pigments whose expression can be tuned to improve the organism's ability to absorb energy from a wider range of wavelengths than would be possible with one pigment alone.