All amino acids have the same backbone structure with an amino group (the α-amino group), a carboxyl group, an α-hydrogen, and a variety of functional groups (R) all attached to the α-carbon. The atoms that are common to all amino acids are called the mainchain or backbone atoms because they will form the mainchain of the protein polymer.

The R groups, which differ from one amino acid to the next, will form the sidechain groups, because those atoms will project out to the side of the linear protein polymer.

Because there are four different groups attached to the central carbon, the alpha carbon is an asymmetric or chiral center. This means that it is not possible to superimpose a compound on its mirror image (enantiomers).

In order to determine the absolute configuration of a chiral center follow these steps:

Although chiral compounds have the same physical properties, they generally have quite different biological properties. In the case of amino acids, and other biological compounds, the chirality of a carbon is also indicated by another labeling scheme, D and L. This scheme is based on the chirality of a reference compound, D- or L-glyceraldehyde. Bioselectivity gives rise to the dominance of one form of chirality for amino acids in nature; all common amino acids have the same chirality as L-glyceraldehyde. Although most amino acids are S, cysteine is an exception, its absolute chirality is R when the above rules are applied.

Use the steps listed above along with the Jmol on the left below to answer the questions on the right.

1. What atom or set of atoms should be placed in the z-axis (pointing away from you) to in order to determine if the molecule is R or S? The substituent of lowest priority (lowest atomic number) is placed on the z-axis, or pointing away from you.

c (Since H atom has the smallest molecular weight is has the least priority.)

Remember that the priority increases with increased atomic number.

R is clockwise and S is counterclockwise.

b. (The priority increases in a counterclockwise direction.)

Use this Jmol to answer chirality questions.

1. Jmol structures of valine and cysteine are shown in the middle and on the right, respectively. A static image of L-alanine is shown on the left. What is the chirality of  valine, using the D, L notation?

rotate valine until it has the same orientation as L-alanine, with the alpha-proton pointing to the back. 2.  Jmol structures of valine and cysteine are shown in the middle and on the right, respectively. A static image of L-alanine is shown on the left. What is the chirality of  cysteine, using the D, L notation and R,S notation?

rotate cysteine until it has the same orientation as L-alanine, with the alpha-proton pointing to the back. c (Although the configuration is L because it is the same as L-alanine, the presence of the sulfur atom makes the beta-carbon higher in priority than the carbonyl, making the absolute configuration R instead of S.)

Instructions: You should become familiar with the functional groups associated with the sidechain atoms of each amino acid. You should be able to infer the properties of the side chain from the 2D chemical diagram and the 3D structure. For example, which amino acids have polar sidechains? Which have planar aromatic groups? You can review the basic functional groups that were discussed in the first lecture by opening this activity. 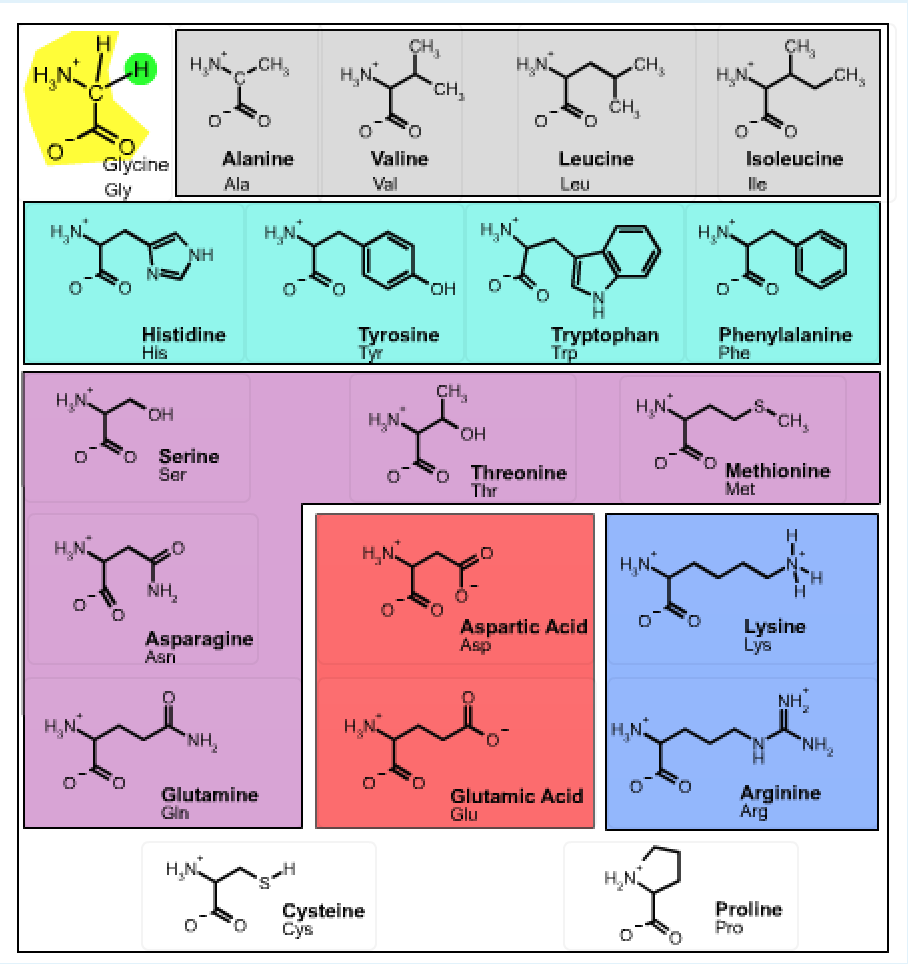 Acid-Base Properties of Amino Acids and Their Side-Chains

The overall protonation state of an amino acid depends on the pH of the solution and the \(pK_a) values of its ionizable groups. The overall charge at any pH can be calculated using the formula:

An example of calculating the charge on the amino acid glycine is given in the previous lecture.

The isoelectric pH (pI) is the pH where a molecule (amino acid, protein, etc.) has no net charge. Using the above formula, it is possible to show that the pI for an amino acid that does not have an ionizable sidechain is the average of the \(pK_a) for the amino and carboxyl groups: pI = (1/2)(\(pK_a)NH2+\(pK_a)COOH). This simple formula does not apply to amino acids with ionizable side chains, in which case the general formula for calculating the charge (shown above) has to be used to find the pH where the average charge on the molecule is zero.

Due to the dominance of the absorption by Trp residues, most proteins show a maximum light absorbance at a wavelength of 280 nm.

The amount of light absorbed by a solution of concentration [X] is given by the Beer-Lambert Law: \(A=\varepsilon l[X]\), where [X] is the concentration of the absorbing species, in moles/L, and \(l\) is the pathlength of the light (usually 1 cm). Given a known extinction coefficient it is possible to measure the concentration of a protein. Note that experimentally accurate absorption measurements seldom exceed ~3.0; at this value most of the light is absorbed by the sample and very little light reaches the detector in the instrument.

The resulting peptide chain is linear, defined by the mechanism that builds the polymer, and has defined ends. Short polymers (< 50 residues or amino acids) are usually referred to as peptides, and longer polymers as proteins. Because the synthesis takes place from the alpha amino group of one amino acid to the carboxyl group of another amino acid, the result is that there will always be a free amino group on one end of the growing polymer (the N-terminus) and a free carboxyl group on the other end (the C-terminus). Note that the potential exists for the formation of amide (peptide) links involving the carboxyl and amino groups in the side chains, but bioselectivity directs the synthesis to be linear, involving only the alpha amino and alpha carboxyl groups.

Note that after the amino acid has been incorporated into the protein, the charges on the amino and carboxy terminus have disappeared. Thus the mainchain atoms have become polar functional groups. Since each residue in a protein has exactly the same mainchain atoms, the functional properties of a protein must arise from the different sidechain groups.

learn by doing: Test Your Knowledge of Amino Acids

You should become familiar with the functional groups associated with the sidechain atoms of each amino acid. You should be able to infer the properties of the side chain from the 2D chemical diagram and the 3D structure. For example, which amino acids have polar sidechains? Which have planer aromatic groups? You can review the basic functional groups that were discussed in the first lecture by following this link. Instructions: In order to answer the following questions you will have to view the 3D structure of different amino acids in the Jmol window. You can load different structures by clicking on the name of the amino acid. Note that you may have to click twice the first time you use this tool.

1. Which amino acid is this?

You should focus on the sidechain atoms

2. Which amino acid is aromatic (planer sidechain) and very polar?

c (a. although planer - it is non-polar; b. although non-polar it is not aromatic; d. but close - tyrosine is aromatic and somewhat polar, but not very polar. )

3. Which amino acid has a carboxylic acid functional group on its sidechain?

c (a. the functional group is an amide.; b. serine contains an alcohol (-OH) group; c. lysine has an amino group.)

4. Which pairs of amino acids are similar in structure, but differ in that one contains a carboxylic acid functional group and one an amide?

a. Lysine and Leucine

b. Aspartate and Asparagine

c (Since H atom has the smallest molecular weight is has the least priority.)

1. Which amino acid is this?

The substituent of lowest priority (lowest atomic number) is placed on the z-axis, or pointing away from you.

5. Which pairs of amino acids both contain the same functional group, but differ in that one is more hydrophobic than the other?

a. Serine and Threonine

b. Threonine and Valine

c (both of these have an alcohol functional group and threonine is more non-polar due to the additional methyl group.)

6. All of the following amino acids contain an aromatic group as part of their sidechain, except:

d. (note that the ring is non-planar and therefore not aromatic.)

1. Which of the following is not a sensible grouping of amino acids based on their polarity properties?

e. None of the above

Review the condensation reaction on the page.

b. (two (2) waters are liberated during the condensation reactions.)

3. List one amino acid whose sidechain is uncharged at neutral pH and can form hydrogen bonds.

Pick an amino acid with a polar sidechain.

The possible choices are Tyrosine, Tryptophan, Serine, Threonine, Asparagine, Glutamine. All other amino acids either have no hydrogen bonding capability or have a charge at pH=7.0.

Tyrosine, serine, and threonine have an -OH group that can both donate and accept a hydrogen bond.