The light reaction of photosynthesis in green plants is shown below.  In this process, in a scheme that is reminiscent of electron transport in mitochondria, water is oxidized by photosystem II. Electrons from water are moved through PSII to a mobile, hydrophobic molecule, plastaquinone (PQ) to form its reduced form, PQH2.   PSII is a complicated structure with many polypeptide chains, lots of chlorophylls, and Mn, Ca, and Fe ions.  A Mn cluster, called the oxygen evolving complex, OEC, is directly involved in the oxidation of watre.  Two key homologous 32 KD protein subunits, D1 and D2, in PSII are transmembrane proteins and are at the heart of the PSII complex.

"Of all the biochemical inventions in the history of life, the machinery to oxidize water — photosystem II — using sunlight is surely one of the grandest." (Sessions, A. et al, 2009)

Another photosystem, PS1, is also found further "downstream" in the electron transport pathway.  It takes electrons from another reduced mobile carrier of electrons, plastocyanin (PCred) to ferredoxin, which becomes a strong reducing agent. Ferrodoxin is a protein with an Fe-S cluster (Fe-S-Fe-S in a 4 membered ring, with 2 additions Cys residues coordinating each Fe).  It  ultimately passes its electrons along to NADP+ to form NADPH. A summary of the light reaction in plants and standard reduction potentials of the participants, are shown below.  Note that many of the complexes produce a transmembrane proton gradient.  In contrast to mitochondria, the lumen (as compared to the mitochondrial matrix) becomes more acidic that the other stroma.  Protons then can move down a concentration gradient through the C0C1ATPase to produce ATP required for reductive biosythesis of glucose.

he net reaction carried out by PS2 is the oxidation of water and reduction of plastoquinone.

Note that water is not converted to 2H2 +  O2  , as in the electrolysis of water.  Rather the Hs are removed from water as protons in the lumen of the cholorplast, since the part of PSII which oxides water is near the lumenal end of the transmembrane complex.   Protons required to protonated the reduced (anionic) form of plastaquinone to form PQH2, an activity of PSII found closer to the stroma, derive from the stroma.  which then can be used to protonated the "anionic" form of reduced PQ to form PQH2.

A quick look at standard reduction potentials shows that the passing of electrons from water (dioxygen  SRP = +0.816 V) to plastoquinone (approx  SRP of  0.11 ) is not thermodynamically favored.  The process is driven thermodynamically by the energy of the absorbed photons.

The crystal structure of PSII from a photosynthetic cyanobacterium consists of 17 polypeptide subunits with metal and pigment cofactors and over 45,000 atoms. Of particular interest is the P680 chlorophyll reaction center, which consists of four monomeric chlorphylls adjacent to a cationic Tyr-D side chain which destabilizes the chlorophyll molecules.  When H2O gets oxidized to form dioxygen, 4 electrons must be remove by photoactivated P680.  In PSII, this process occurs in 4, single electron steps, with the electrons first being transferred to a Mn4 cluster cofactor (of composition Mn4Ca1Cl1-2(HCO3)y.   This inorganic Mn cluster is often called OEC (oxygen evolving complex), alternatively abbreviated as OEX.  The electrons passed through the Mn complex are delivered to P680 by a photoactive Tyr free radical (Tyr Z).  The actual structure of the OEC could not be resolved in this structure, but other structural and spectroscopic data support the structure below (Chem. Rev., 2001, 101, 21-35), which also shows a possible mechanism for electron and proton transfer from water to form dioxygen.  5 discrete intermediates of the OEC, S0-S4, are suggested from the experimental data (Kok cycle).  These were postulated  from experiments in which spinach chloroplast were illuminated with short light pulses.  A pattern of dioxygen release was noted that repeated after 4 flashes.  Ultimately, light absorption by P680 forms excited state P680* which donates an electron to pheophytin (which passes them to quinones) to form P680+, which receives electrons from the OEC, specifically the TyrZ radical.   As we will see in a bit, this structure and mechanism has been called into question by new crystallographic structures.

Investigators have made non-peptide mimetics of superoxide dismutase to facilitate therapeutic removal of excess superoxide formed in brain and heart tissue.    These may arise  after an oxidative burst from reperfusion of these tissues after heart or brain attacks.  Likewise, scientist are trying to build synthetic PSII-OEC complexes which could be used to form dioxygen or hydrogen gas for fuels.

In summary, for PSII in plants

Steps 1-4 repeat three more times, each requiring another photon and each cycle producing another electron which passes on through the system.  Remember that when O2 acts as an oxiding agent, it gains four electrons.  The first produces superoxide, the next peroxide, and two more produce oxide which when protonated is water.  Hence two waters and four cycles are required to remove the four electrons required to produce dioxygen.

A similar mechanism is found in PSI, except plastacyanin, not dioxygen is oxidized, with electrons moved to ferrodoxin.  This is likewise a difficult process since the reduction potential for  oxidized plastocyanin (the form that can act as a reducing agent) is +0.37  while for ferrodoxin it is -0.75.  This transfer of electrons is an uphill thermodynamic battle since the more positive the standard reduction potential, the better the oxidizing agent and the more likely the agent becomes reduced.  What drives this uphill flow of electrons.  Of course, it is the energy input from the photon.

The mechanism of the OEC is still not fully understood.  It's experimentally difficult to unravel given its complexity. Paradoxically it is quite simple in overall terms.  Here is the essential reaction:

Again H2 is not formed, although efforts are being made to create a catalyst to do that so we could power our world through clean eneryg.

Nature has appeared to evolve a single gene for the part of PSII that binds an inorganic cluster involved in oxygen formation.  The cluster is called the Oxygen Evolving Complex (OEC) and is bound to a central protein in PS2.  The cluster, Mn4CaO5, appears identical in all photosynthetic organisms, and is shown below.  Researchers were surprise to find that the Ca ion was an integral part of the basic geometric “framework” of the OEC instead of a Mn which was found to be “dangling” from the basic geometric framework. The shape outlined by O5-Ca-O1-Mn1 and Mn3-O2-Mn2-O3 is similar to cubane.  Describe how every two adjacent Mn are linked.   Describe the coordination of Ca.  Four waters (W1-W4) are coordinated to the OEC.  No others were found in the region.  What role may some of the waters have in the complex?

The amino acid side chains that interact with the OEC are shown below.  The coordination number for all the Mn ions (including interacting waters) is identical.  What is it for Mn1?  For Ca?  (Note that the Ala 344 is at the carboxy terminus of one of the protein subunits.) The OEC can be thought of as a distorted cubane with a Mn3-O4-Mn4-O5 back.  Bonds to O5 are longer than the other bonds.  What might that imply about the strength of the bonds compared to the other metal-oxygen bonds?    What is the expected charge of the oxo ligands in the OEC?  If the metal-O5 bond lengths are longer than the others, what might that imply about the charge on O5?    Would it be consistent with a ligand other than an oxo ligand?  What might it be?

Which waters are most proximal to O5?  Ultimately an O-O bond must form between two waters.  Which are the most likely candidates based on the structure above?  Which ion, Ca or Mn, would most likely be involved in electron transfer to water oxygens? Write the electron configuration for both ion.   Standard reduction potentials for Mn are shown below.  What is the oxidation number of Mn in each compound.  Which oxidation state might be sufficient for the oxidation of H2O in the OEC?

The mechanism by which water is oxidized occurs through a 5 stage Kok cycle illustrated below.

The Mn states in the Kok diagram denote different discrete oxidation states where n the number of oxidative “equivalent” stored in the OEC during cycle progression.

How does this translated into structural/chemical changes in the OEC.  Figure below provide recent evidence.

From where are electrons lost? 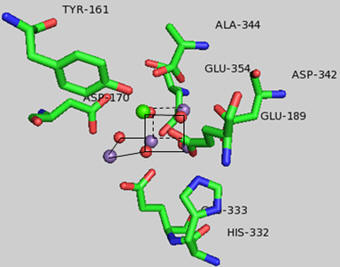 Figure:  Environment of Y161 in the OEC of T. vulcanus 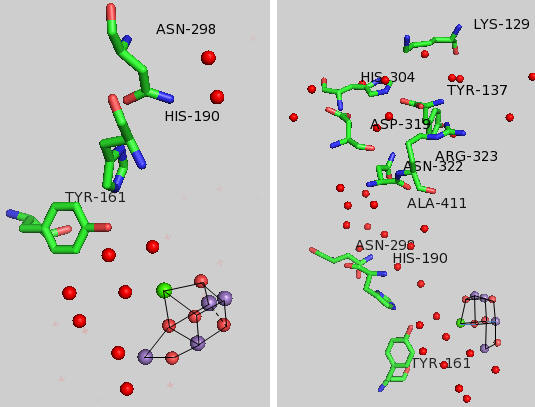 Chlorophylls and the Reaction Center

Photosynthetic bacteria and plant have an abundance of molecules that interact with visible light.  The main one found in PS2 is chlorophyll a whose structure is shown below. 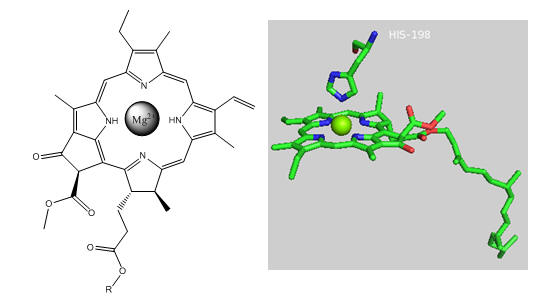 In PS2 there are 35 chlorophylls.  Seven of them use water for ligand to the Mg ion, while the rest use His (as shown in the example above).   Why might there be so many chlorophylls in PS2? The chlorophylls (Chl) are arranged in a very specific arrangement as shown below. 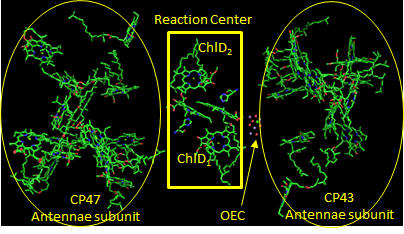 Now we will consider the key process: how the reaction center chlorophyll becomes nature’s most powerful oxidant.

Why might molecule “b” have a lower excited state energy?  Show by adding arrows and moving the given electrons in the above diagram how excitation of molecule a can lead to the final state shown to the right.  What would be the charge on molecule “a”?   Molecule “b”?  Which would might be a powerful oxidant?

Next we must consider how the oxidant made at the reaction center, denoted as P680.+  leads to changes in the OEC as illustrated in the S0-4 oxidative intermediates in the Kok cycle.

Based on the figures above, which chlorophyll in the reaction center, ChlD1 or ChlD2 represents molecule “a” in the top left figure?  Molecule “b”?    What might be the role of the coplanar partner molecules PD1 and PD2 ?

In reality, quantum mechanical calculations show a coupling between ChlD1 or ChlD2 such that 80% of the positive charge and radical character is situated on ChlD1 and 20% is on ChlD2.)  How does Y161.+ lead to sequential transfer of “oxidizing” equivalents to the OEC?  How is Y161 regenerated so that catalysis is continued?

The last feature to consider is the fate of second member of the reaction pair represented by molecule “b” to the right.   It must also be regenerated.  What must is lose to be regenerated?

Cofactors bound in the reaction center allow a path for electron flow.  These include pheophytins (PHE) and plastoquinones A and B.  Pheophytins are chlorophyll a molecules without the central Mg ion.  The structure of plastoquinone is show above.  Trace a likely path for electron flow from molecule “b” to Phe, PQA and then to PQB (with the realization that quantum mechanical coupling and tunneling occur in this process so that the process are coupled). 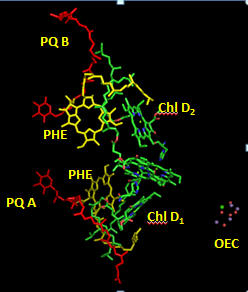