We have just seen how we can transduce the chemical potential energy stored in carbohydrates into chemical potential energy of ATP - namely through coupling the energy released during the thermodynamically favored oxidation of carbon molecules through intermediaries (high energy mixed anhydride in glycolysis or a proton gradient in aerobic metabolism) to the thermodynamically uphill synthesis of ATP. There is a situation that occurs when we wish to actually reverse the entire process and take CO2 + H2O to carbohydrate + O2. This process is, of course, photosynthesis which occurs in plants and certain photosynthetic bacteria and algae. Given that this process must by nature be an uphill thermodynamic battle, let us consider the major requirements that must be in place for this process to occur:

The light reaction of photosynthesis produces these three  molecules, O2, NADPH and ATP.  We will explore the light reaction in the first two sections of this chapter. The dark reaction, which as the name implies can occur in the dark, involves the actual fixation of carbon dioxide into carbohydrate using the ATP and NADPH produced in the light reaction.

The energy to power the light reactions comes directly from sunlight. Clue two is that plants have an organelle that animal cells don't - the chloroplast. Its structure is in many ways similar to a mitochondria in that it has an  outer membrane, an intermembrane space, and an inner membrane but in addition, a series of stack, interconnected compartments called thylakoids bounded by a thylakoid membrane surrounding a lumen.  A schematic is shown in the figure below.

The enyzme complexes involved in the light reaction are aligned in the thylakoid membrane  just as the membrane complex involved in mitochondrial electron transport/oxidative phosphorylation were found in the mitochondrial inner membrane.  That process used Complex I, Complex III, Complex II (succinate dehydrogenase) and Complex IV to transfer electrons from NADH and FADH2 to increasingly potent oxidizing agents (ubiquinone, cytochrome C) ending with dioxygen.  The energy released during that thermodynamically favored process was capture in the formation of a proton gradient, which collapsed through the F0F1ATPase to drive ATP synthesis.

For the light reaction, three complexes, Photosystem II, cytochrome b6f, and Photosystem I are used to transfer electrons from H2O in plastoquinone and plastacyanin to a terminal acceptor, NADP+ to form the reducing agent NADPH needed for carbohydrate synthesis in the dark reaction.  The energy released during the electron transfer process is likewise captured in the form of a proton gradient as protons are move from the chlorplast stroma to the lumen of the thylakoid.  The collapse of the resulting proton gradient powers ATP synthesis.  These reactions are shown in the figure below.

Now let's start the process from the beginning, the absorption of light!

Plants have many pigments (chlorophyll, phycoerthryins, carotenoids, etc.) whose absorption spectra overlap that of the solar spectra. The main pigment, chlorophyll, has a protophorphryin IX ring (same as in heme groups) with uses Mg2+ instead of Fe2+. When the chlorophyll absorbs light, the excited electrons must eventually relax to their ground state. It can do this by either radiative or nonradiative processes. In radiative decay, a photon of lower energy is emitted (after some energy has already been lost by vibrational transitions) in a process of either fluorescence or phosphorescence.  In nonradiative decay, the energy of an excited electron can be transferred to another similar molecule (in this case other chlorophyll molecules) in a process which excites the electron in the second molecule to the same excited state. It is as if a photon is released by the first excited molecule, which then is absorbed by an electron in a second molecule to excite it to the same exited state, but no photon is involved in the energy transfer.  In this fashion, energy is transferred from one chlorophyll to another. This type of energy transfer is called resonance energy transfer or exciton transfer, as shown in the figures bellow.

One type of chlorophyll has slightly different characteristics, however. Because of its unique environment, the energy level of first excited state in the chlorophyll reaction center is lower than in the rest of the chlorophyll molecules, in much the same way that pKa values of amino acid side chains differ with environment, and the standard reduction potential of FAD molecules that are tightly bound to enzymes differ due to the different environment of bound FAD/FADH2.

Instead of radiationless transfer of energy to this special chlorophyll, an electron from the excited state chlorophyll is transferred, which by definition is a redox reaction.  The electron donor (the excited chlorophyll) looses an electron (an oxidation reaction) as the recipient molecule gains one (a reduction).  This charge (electron) transfer reaction produces charge separation on the formation of a positively charged chlorophyll (now an oxidizing agent)  and a negatively charged molecule (now a reducing agent).  The chlorophylls directly involved in this final process are collectively called the reaction center. This process is shown in the figure below.

The figure below shows a cartoon of the absorption of photons and subsequent handoff of energy to the antennnae chlorophylls leading to photoexcitation of the reaction center and subsequent transfer of an electron to the special chlorophyll which has a lower first excited state energy.  This molecule is named pheophytin A.  It is identical to chlorophyll A but lacks the central Mg2+ ion.

Photosystem I and II contain many chlorophyll molecules, which can be considered to act as antennas which transfer energy to the reaction centers. The "antenna" proteins involved in photon adsorption and energy transfer in Photosystem I and II are shown in the figure below. Note the D1, cp47 and cp43 subunits in the figure below are also shown in Figure xx above.  The D1 and D2 subunits contain the reaction center chlorphylls. 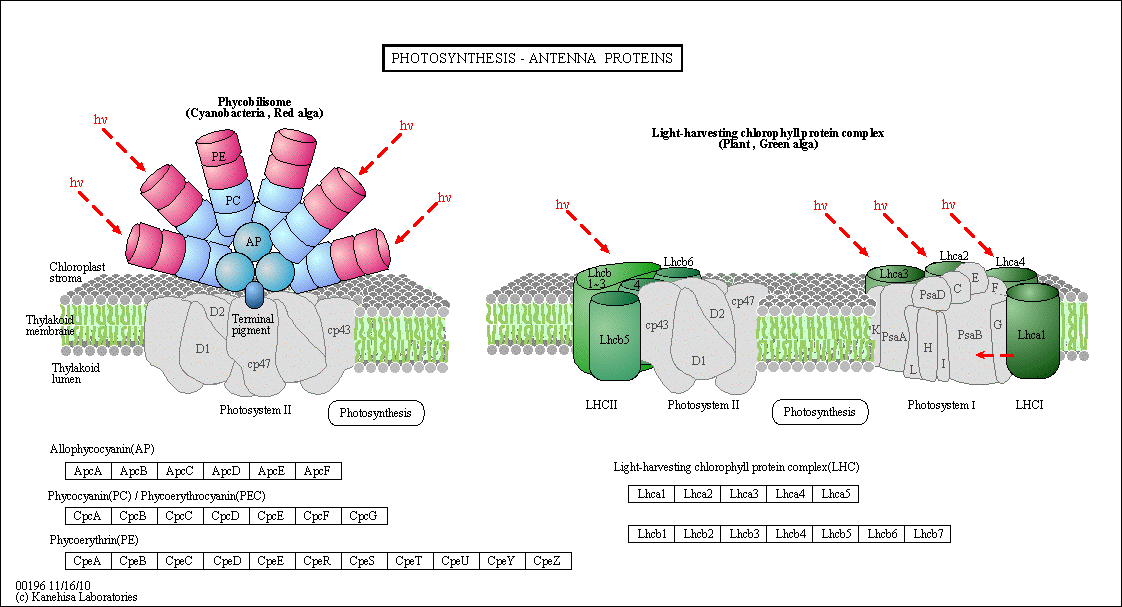 Now let's look in more detail at Photosystem II.  It is key to the existence of aerobic organisms as it produces the dioxygen in our atmosphere.  Its chemistry is phenomenal.  Many are seeking to modify it to produce, in addition to O2, a green energy source, H2. Lets first look at PSII in light of the discussion above.  Where are all the chlorophylls?  The mystical "reaction center"?

The iCn3D model of the Light Harvesting Complex (LHC_II) from pea photosystem II is shown in its entirety (pdb 2bhw).  The protein is shown in grey.  To simplify the model, chlorophyll A molecules are shown in magenta and chlorophyll A isomeric variants in green.  Note the huge number of chlorophyll in the complex, which differentiates it from most protein complex which might have a just a few ligands bound.

Photosynthetic bacteria and plants have an abundance of molecules that interact with visible light.  The main one found in PS II is chlorophyll a whose structure is shown below, along withe variant .  Remember the pheophytin A is identical to chlorphyll A but lacks the central Mg2+ ion.

In PS II, there are 35 chlorophylls.  Seven of them use water as one of the axial ligands to the Mg ion, while the rest use a histidine (see figure below).   The figure below shows the arrangement of chlorphylls in the CP45 and CP43 antennae subunits.  Sandwiched in between them is the reaction center containing 4 special cholorphylls, OEX and a key amino acid near the OEX, Tyr 161.  ( pdb 3ARC).

Two special chlorophylls, ChlD1 and  ChlD2, accompanied by partner chlorophylls, PD1 and  PD2, that are coplanar to each, are found near the OEX and are the key chlorophylls in the reaction center that turn OEX into a powerful enough oxidant to oxidize H2O.

Using the spectroscopic label P680, the reaction center chlorophylls/pheophytin  absorb a photon of light at 680 nm to form the excite state, P680*.  This transfers the excited state electron to pheophytin, and in the process from P680.+, a radical cation and P680.-, a radical anion.  The radical cation, an unstable species, can oxidize another molecule to regain stabilty and in a series of addition linked oxidation stems, water is oxidized (O in water has an oxidation state of 2-) to O2 (in which each oxygen has an oxidation state of 0).  This happens through the oxygen evolving complex, which we will explore in the next section.

Which of the chlorophyll molecules absorbs the light (ie. which is P680)?  The answer is probably all 4 chlorophylls in the reaction center, PD1, PD2, ChlD1, and ChlD2 through a delocalization of the excited electron, which would be describe by a wave function for the combined chlorophylls. On donation of the electron from the P680*, the positive charge, which can be also described as a "hole" (similar to transistors) delocalizes as well.  Quantum mechanical calculations show a coupling between PD1 and PD2, such that 80% of the positive charge and radical character is situated on PD1 and 20% is on PD2.)

The figure below shows the four chlorophylls in the reaction center of  T. Vulcanus.  PD1 appears closest to the OEX.

Now in any enzymatically catalyzed reaction mechanism, the enzyme must return to the beginning state and a path for electron flow must be apparent.  How does the radical cation P680.+ return to the ground state?  As we will see in the next section, it "grabs" an electron from the nearby Y161, which then forms a radical cation, Y.+.  This likewise returns to the ground state by grabbing electron from the OEX which ulitmate grabs one from water. This process repeats four times to remove the four electrons from water need to form dioxgyen.  A different process occurs to remove electrons from the radical anion, P680.-, as well.

The figure below shows the first step in process of reforming P680 and formation of the Y161 radial cation.