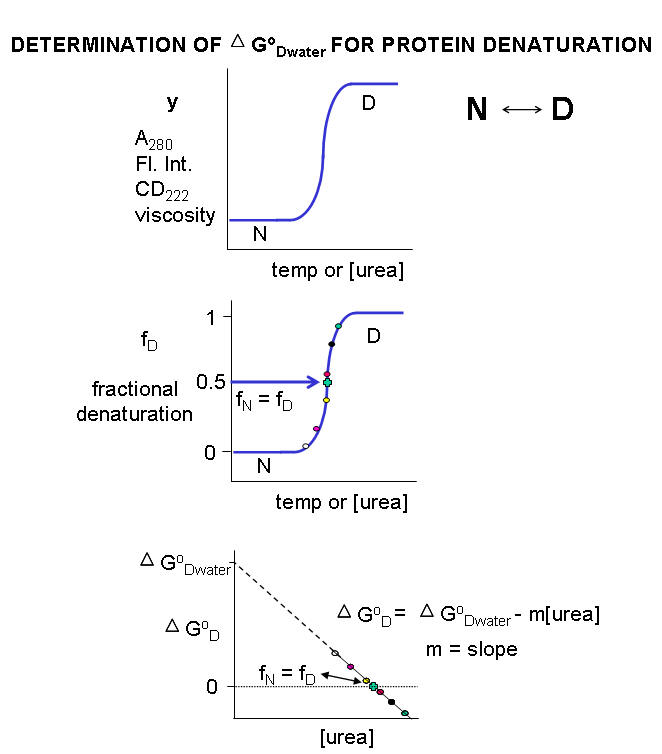 A more realistic denaturation curve might show a linear change in the values of the dependent variable (fluorescence intensity for example) for values of temperature or denaturant concentration well below that at which the protein starts to unfold, or above that at which it is unfolded.  In these cases, the mathematical analysis, presented at the end, is required.

Denaturation with urea or guanidine hydrochloride

For each curve, the value of y (either A280, gluorescence intensity, viscosity, etc) can be thought of as the sum contributed by the native state and from the denatured state, which are present in different fractional concentrations from 0 - 1. Hence the following equation should be reasonably intuitive.

Notice the right hand side of the equations contains variables that are easily measured.

By substituting 2 and 3 into the expression for the equilibrium constant for the reaction N ↔ D we get:

From this, we can calculate ΔG0.

Figure \(\PageIndex{2}\): Tm for thermal denaturation of a protein

Now we can calculate the ΔGow for N ↔ D in water in the absence of urea.  For a simple two state N ↔ D, a plot of ΔGo vs [urea] is linear, and given by the following equation, which should be evident from (\PageIndex{1}\).

It is important to know  the Keq and ΔG0 for the N ↔ D transition in the absence of urea and under "physiological conditions".   A comparison of the calculated values of ΔG0w in the absence of urea for a series of similar proteins (such as those varying by a single amino acid prepared by site-specific mutagenesis of the normal or wild-type gene, would indicate to what extent the mutants were stabilized or destabilized compared to the wild-type protein.  ΔG0w for the N ↔ D transition of the protein in the absence of denaturant  (i.e in water) can be determined by extrapolating the straight line to [urea] = 0.  Admittedly, this is a long extrapolation, but with high quality data and a high correlation coefficient for the linear regression analysis of the best-fit line, reasonable values can be obtained.

Calculation of ΔHo and ΔSo for N <=>D at room temperature

Keq values can be calculated from thermal denaturation curves in the same way as described above using urea as a denaturant by monitoring change in an observable (spectra signal for example) vs temperature.   Knowing Keq,   ΔH0, DS0 can be calculated from equation x below since a semi-log plot of lnKeq vs 1/T is a straight line with a slope of - ΔH0R and a y intercept of + ΔS0/R, where R is the ideal gas constant.

From these equations, it should be evident that all the major thermodynamics constants (ΔG0, ΔH0 and ΔS0 ) for the N ↔ D transition can be calculated from thermal denaturation curves.

It is useful to compare the van't Hoff enthalpy, ΔH0vHoff, with the enthaly change determined directly using differential scanning calorimetry by analyzing a plot of Cp vs T.  (Note that the area under the Cp vs T curve as the protein transitions to the unfolded state has units of kcal.  The ΔH0 for the unfolding is inversely proportional to the width of the curve.) .