Figure 5-1: white flies are an example of this, family Aleyrodidae. Image source: https://www.flickr.com/photos/goshzilla/2502314165 There are around 55,000 known species in Hemiptera (a super-Order containing the Homoptera and the Heteroptera). For the most part, the members of these groups are Paurometabolous but there are a few species in the Homoptera that have a pupae-like final juvenile stage (white flies are an example of this, family Aleyrodidae, figure 5-1) that is somewhat transitionary in the evolution of the holometabola. Hemiptera may or may not have wings as adults, and some (like the aphids, family Aphididae) can have adults in the same species both with (alate) and without wings (apterous; figure 5-2). Other species always have wings as adults, like the Lygus bug (figure 5-3)  in the Miridae family, and some species never have wings, like the Human parasite Cimex lectularius, the bed bug (figure 5-4). 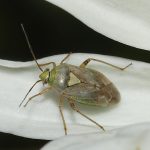 Hemiptera occupy a wide range of ecological niches and have very different life history strategies within the group, but a few characteristics make them easily distinguishable from the other orders. The Hemiptera are most frequently confused with the Coleoptera, which have hardened forewings and chewing mouthparts. Though it may be difficult to see the difference in wing types, mouthparts types for Hemiptera are always piercing/sucking, evident by the long beak visible either in profile or the underside of the insect. The hardened forewings in the Coleoptera, the elytra, are completely hardened, which is not the case in any of the Hemiptera. The wings of the Homoptera order are soft and malleable when present, and held tent-like above the body at rest; the wings of the Heteroptera are half-elytra. For the latter group, only the proximal part of the wing is thickened (though not hardened as in Coleoptera, but more like the tegmina of grasshopper forewings). The distal end of each wing is membranous, though it may still have a dark color. When at rest, the wings fold over each other on the dorsum of the insect and the two sections overlapping often create an easily identified “X” pattern. The elytra of Coleoptera always meet along the medial line without overlapping.

Most of the Hemiptera are terrestrial and plant feeders, using their beak/stylet to feed on plant fluids the way mosquitoes feed on animal blood. There are some that can even transmit plant diseases as they move from plant to plant to feed (example: Tomato Leaf Curl Virus). Many of these plant feeding Hemiptera are therefore serious economical pests. There are a few members of the Hemiptera, primarily in the Heteroptera, that are economically important beneficial insects, acting as natural enemies of many other insects and arthropods, including other Hemiptera. A few examples of these are Assasin bugs (family Reduviidae, figure 5-5), and minute pirate bugs (family Anthocoridae, figure 5-6), and even one predaceous species of Stink Bug, family Pentatomidae (figure 5-7).