The climate of a region describes the average atmospheric conditions (temperature and precipitation) that region experiences and how much those conditions vary across seasons and years. Climate differs from weather in that weather is the atmospheric conditions at any given moment while climate is the long-term averages, patterns, or trends. This distinction is discussed in more detail in the chapter on climate change.

Climate is heavily influenced by the shape of the Earth, the tilt of the Earth’s axis, and the pattern of the Earth’s movement around the sun. First, the Earth is a sphere, which means that the intensity of the sun’s energy varies across latitudes (Fig. 2.3.2). Near the geographic equator (0° latitude), the sun’s rays hit the Earth directly, and deliver a high amount of heat and light per unit area. At high latitudes (nearer to the poles), the sun’s rays strike the Earth at an oblique angle, and heat and light are spread across a larger area of the Earth’s surface. Thus, the spherical shape of the Earth is responsible for the overall pattern of warmer average temperatures near the equator and cooler average temperatures towards the poles (Fig 2.3.3). 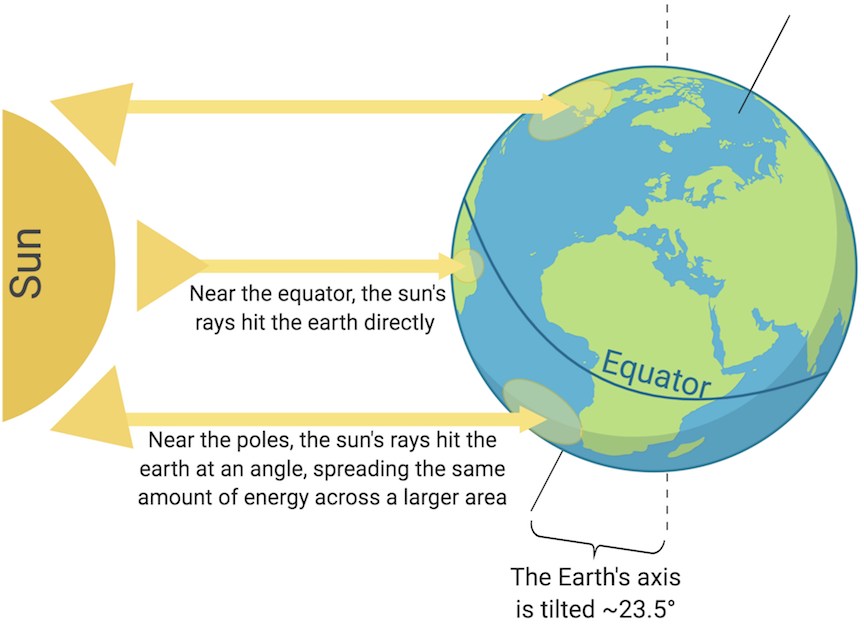 Figure \(\PageIndex{1}\): Relationship between the Earth’s shape and tilt on solar energy. Figure created by L Gerhart-Barley with biorender.com 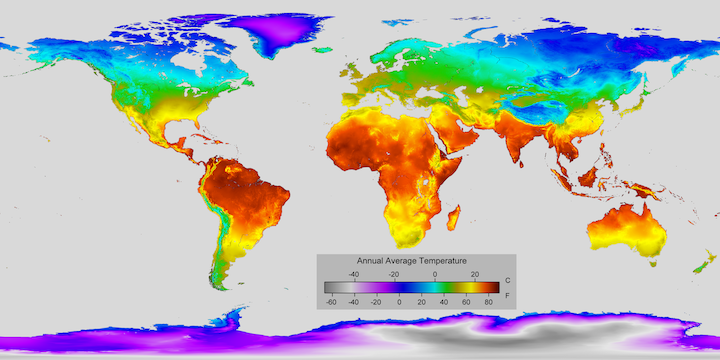 Solar energy input also drives patterns of precipitation and atmospheric circulation (Fig 2.3.4). At the geographic equator, where the sun’s energy is intense, the warm air expands and rises. As it reaches the upper atmosphere, it cools. Since cooler air cannot hold as much water vapor as warm air, these cooling, condensing air masses lose much of their moisture as precipitation. These air masses move away from the equator, towards the north or south. Around 30° N and S latitude, these cool, dry air masses fall back towards the surface of the Earth. As they approach the surface, they warm and absorb moisture back out of the lower atmosphere, causing dry regions around 30° N and 30° S latitudes. These air masses then move back towards the equator, where they will warm, absorb more moisture and rise again, completing the cycle of air movement between 0° (the geographic equator) and 30° N and 30° S (Fig 2.3.4). This cycle of air movement is named a Hadley Cell. Similar cells exist from 30° to 60° latitudes (called Ferrel Cells) and from 60° to 90° latitudes (called Polar Cells), though the Hadley Cell is the strongest, since it is centered where the sun’s energy is most intense. The spherical shape of the Earth, therefore, and its influence on these atmospheric cells, drives the overall pattern of global precipitation, particularly the abundantly high precipitation near the geographic equator and extremely low precipitation at 30°N and 30°S latitudes (Fig 2.3.5) 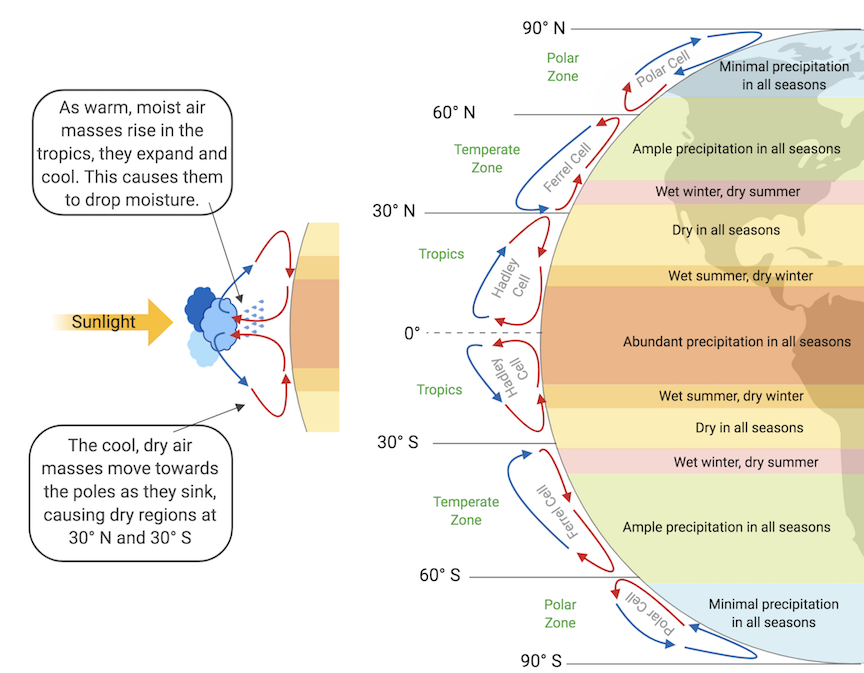 Figure \(\PageIndex{5}\): Relationship between the tilt of the Earth’s axis and its orbit around the sun. Figure created by L Gerhart-Barley with biorender.com

Figure \(\PageIndex{6}\): The distance of the Earth from the sun does not influence seasons. Seasons are driven entirely by the tilt of the Earth’s axis as it orbits around the sun. Figure created by L Gerhart-Barley with biorender.com

The rainfall produced by the Hadley Cell air masses as they rise, expand, and cool produces a band of rainclouds, termed the Inter-Tropical Convergence Zone (ITCZ). The ITCZ follows the thermal equator as it moves north and south throughout the year (Fig 2.3.8); however, since the ITCZ is in the upper atmosphere, it is also influenced by air currents and so does not always form a straight or solid band, and may even split into two bands in some seasons or in some areas.

Figure \(\PageIndex{7}\): The location of the Inter-Tropical Convergence Zone (ITCZ) in July and January. Image from Wikimedia Commons3.

The global patterns of temperature (Fig 2.3.3) and precipitation (Fig 2.3.5) correlate to global patterns of biodiversity (Fig 2.3.9). Regions near the equator (which have high temperature and high precipitation) tend to have higher levels of diversity, while regions at higher latitudes (nearer to the poles) have overall lower diversity. This pattern is termed the latitudinal diversity gradient, and has been documented in many organismal groups, both terrestrial and aquatic. This gradient is discussed in more detail in the chapter on biomes.