In bacteria, archaea, and eukaryotes, the primary role of DNA is to store heritable information that encodes the instruction set required for creating the organism in question. While we have gotten much better at quickly reading the chemical composition (the sequence of nucleotides in a genome and some chemical modifications that to it), we still don't know how to decode reliably all the information within and all the mechanisms by which it and ultimately expressed.

There are, however, some core principles and mechanisms associated with the reading and expression of the genetic code whose basic steps and that need to be part of the conceptual toolkit for all biologists. Two of these processes are transcription and translation, which are the coping of parts of the genetic code written in DNA into molecules of the related polymer RNA and the reading and encoding of the RNA code into proteins, respectively.

In BIS2A, we focus on developing an understanding of the process of transcription (recall that an Energy Story is a rubric for describing a process) and its role in the expression of genetic information. We motivate our discussion of transcription by focusing on functional problems (bringing in parts of our problem solving/design challenge rubric) that must the process to take place. We then describe how the process by Nature to create a variety of functional RNA molecules (that may have various structural, catalytic or regulatory roles) including so called messenger RNA () molecules that carry the information required to synthesize proteins. Likewise, we focus on challenges and questions associated with the process of translation, the process by which the ribosomes synthesize proteins.

We often depict the basic flow of genetic information in biological systems in a scheme known as "the central dogma" (see figure below). This scheme states that information encoded in DNA flows into RNA via transcription and ultimately translated to proteins. Processes like reverse transcription (the creation of DNA from and RNA template) and replication also represent mechanisms for propagating information in different forms. This scheme, however, says nothing per se about how information or about the mechanisms by which regulatory signals move between the various layers of molecule types depicted in the model. Therefore, while the scheme below is a nearly required part of the lexicon of any biologist, perhaps left over from tradition, students should also know mechanisms of information flow are more complex (we'll learn about some as we go, and that "the central dogma" only represents some core pathways). An important concept in the following sections is the relationship between genetic information, the genotype, and the result of expressing it, the phenotype. These two terms and the mechanisms that link the two will repeatedly over the next few weeks—start becoming proficient with using this vocabulary. 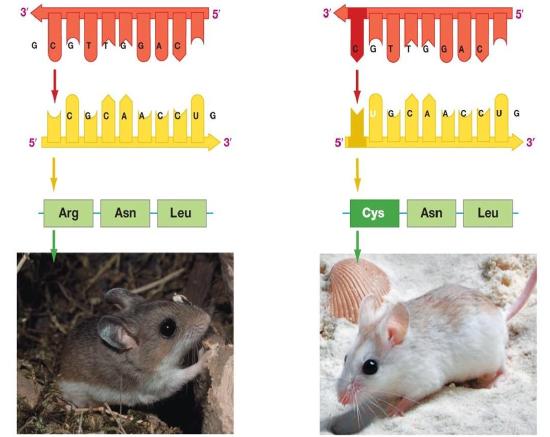 Genotype refers to the information stored in the DNA of the organism, the sequence of the nucleotides, and the compilation of its genes. Phenotype refers to any physical characteristic that you can measure, such as height, weight, amount of ATP produced, ability to metabolize lactose, and response to environmental stimuli. Differences in genotype, even , can lead to different phenotypes subject to natural selection. The figure above depicts this idea. Also note that, while we talk classically about the genotype and phenotype relationship in multicellular organisms, this nomenclature and the underlying concepts apply to all organisms, even single-celled organisms like bacteria and archaea.

What is a gene? A gene is a segment of DNA in an organism's genome that encodes a functional RNA (such as , ,.) protein product (enzymes, tubulin, etc.). A generic gene contains elements encoding regulatory regions and a region encoding a transcribed unit.

Genes can gain mutations—defined as changes in the composition and or sequence of the nucleotides—either in the coding or regulatory regions. These mutations can lead to several outcomes: (1) nothing measurable happens as a result; (2) the gene is no longer expressed; or (3) the expression or behavior of the gene products) are different. In a population of organisms sharing the same different variants of the gene as alleles. Different alleles can lead to differences in phenotypes of individuals and contribute to the diversity in biology under selective pressure.

Start learning these vocabulary terms and associated concepts. You will then be familiar with them when we dive into them in more detail over the next lectures.