Transcription from DNA to RNA

Bacteria, archaea, and eukaryotes must all transcribe genes from their genomes. While the cellular location may be different (eukaryotes perform transcription in the nucleus; bacteria and archaea perform transcription in the cytoplasm), the mechanisms by which organisms from each of these clades carry out this process are the same and can by three stages: initiation, elongation, and termination.

Transcription is creating an RNA copy of a segment of DNA. Since this is a process, we want to apply the Energy Story rubric to develop a functional understanding of transcription. What does the system of molecules look like before the start of the transcription? What does it look like at the end? What transformations of matter and transfers of energy happen during the transcription, and what catalyzes the process? We also want to think about the process from a standpoint. If the biological task is to create a copy of DNA in the chemical language of RNA, what challenges can we reasonably hypothesize or expect, given our knowledge about other nucleotide polymer processes, must ? Is there evidence that Nature solved these problems in different ways? What seem to be the criteria for the success of transcription? You get the idea.

Listing some basic requirements for transcription

Let us first consider the tasks at hand by using some of our foundational knowledge and imagining what might need to happen during transcription if the goal is to make an RNA copy of a piece of one strand of a double-stranded DNA molecule. We'll see that using some basic logic allows us to infer many of the important questions and things that we need to know to describe the process properly.

Let us imagine that we want to design a /nanobot that would conduct transcription. We can use some thinking to identify problems and subproblems that need to by our little robot.

These are only some core questions. One can dig deeper if they wish. However, these are already good enough for us to get a good feel for this process. Notice, too, that many of these questions are remarkably similar to those we inferred might be necessary to understand DNA replication. Proteins responsible for creating an RNA copy of a specific piece of DNA (transcription) must first be able to recognize the beginning of the element to . A promoter is a DNA sequence onto which various proteins, collectively known as the transcription machinery, bind and start transcription. In most cases, promoters exist upstream (5' to the coding region) of the genes they regulate. The specific sequence of a promoter is very important because it determines whether the cell transcribes the corresponding coding portion of the gene all the time, sometimes, or infrequently. Although promoters vary among species, a few elements of similar sequences . At the and regions upstream of the initiation site, there are two consensus sequences, or regions similar across many promoters and across various species. Some promoters will have a sequence very similar to the consensus sequence (the sequence containing the most common sequence elements), and others will look very different. These sequence variations affect the strength to which the transcriptional machinery can bind to the promoter to start transcription. This helps to control the number of transcripts that and how often they get made.

Figure 2. (a) A general diagram of a gene. The gene includes the promoter sequence, an untranslated region (UTR), and the coding sequence. () A list of several strong E. coli sequences. The -35 box and -10 box sequences throughout the strong promoter list. Weaker promoters will have more base pair differences when compared to these sequences.
Source: ..lecture12.html

In bacterial cells, the -10 consensus sequence, called the -10 region, is AT rich, often TATAAT. The -35 sequence, TTGACA, and bound by the protein . Once this protein-DNA interaction , the subunits of the core RNA polymerase bind to the site. Because of the relatively lower stability of AT associations, the AT-rich -10 region facilitates unwinding of the DNA template, and .

Eukaryotic promoters are much larger and more complex than prokaryotic promoters, but both have an AT-rich region—in eukaryotes, it a TATA box. For example, in the mouse thymidine kinase gene, at . For this gene, the exact TATA box sequence is TATAAAA, as read in the 5' to 3' direction on the strand. This sequence is not identical to the E. coli -10 region, but both share the quality of AT-rich element.

The initiation of transcription begins with the binding of RNA polymerase to the promoter. Transcription requires the DNA double helix such that one strand can the template for RNA synthesis. The region of unwinding a transcription bubble.

Transcription always proceeds from the template strand, one of the two strands of the double-stranded DNA. The RNA product is complementary to the template strand and is almost identical to the strand, called the coding strand, with the exception that RNA contains a uracil (U) in place of the thymine (T) found in DNA. During elongation, an enzyme called RNA polymerase proceeds along the DNA template, adding nucleotides by base pairing with the DNA template in a manner similar to DNA replication, with the difference being an RNA strand that does not remain bound to the DNA template. As elongation proceeds, the DNA ahead of the core enzyme and rewound behind it. Note that the direction of synthesis is identical to that of in DNA—5' to 3'.

Figure 4. During elongation, RNA polymerase tracks along the DNA template, synthesizing in the 5' to 3' direction, unwinding and then rewinding the DNA as . 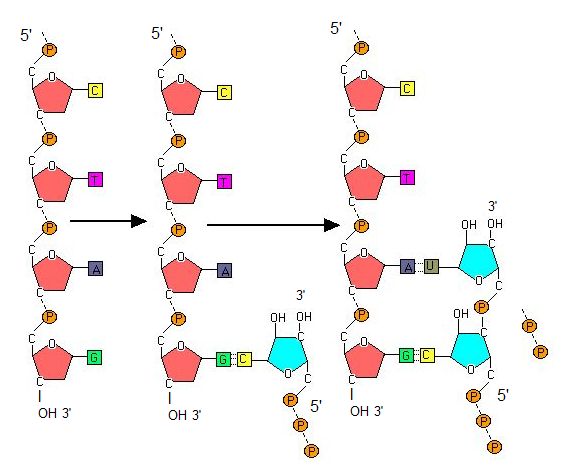 In bacteria, elongation begins with the release of the subunit from the polymerase. The dissociation of allows the core enzyme to proceed along the DNA template, synthesizing in the 5' to 3' direction at a rate of approximately 40 nucleotides per second. As elongation proceeds, the DNA ahead of the core enzyme and rewound behind it. The base pairing between DNA and RNA is not stable enough to maintain the stability of the synthesis components. Instead, the RNA polymerase acts as a stable linker between the DNA template and the nascent RNA strands to ensure that elongation prematurely.

In eukaryotes, following the formation of the preinitiation complex, the polymerase from the other transcription factors, and to proceed as it does in prokaryotes with the polymerase synthesizing in the 5' to 3' direction. As discussed previously, RNA polymerase II transcribes the major share of eukaryotic genes, so this section will focus on how this polymerase accomplishes elongation and termination.

Once a gene , the bacterial polymerase needs to dissociate from the DNA template and liberate the newly made . Depending on the gene being transcribed, there are two kinds of termination signals. One is protein-based, and the other is RNA-based. Rho-dependent termination by the protein, which tracks along the polymerase on the growing chain. Near the end of the gene, the polymerase encounters a run of G nucleotides on the DNA template and it stalls. As a result, the protein collides with the polymerase. The interaction with rho releases the from the transcription bubble.

Rho-independent termination by specific sequences in the DNA template strand. As the polymerase nears the end of the gene being transcribed, it encounters a region rich in CG nucleotides. The folds back on itself, and the complementary CG nucleotides bind. The result is a stable hairpin that causes the polymerase to stall as soon as it a region rich in AT nucleotides. The complementary UA region of the transcript forms only a weak interaction with the template DNA. This, coupled with the stalled polymerase, induces enough instability for the core enzyme to break away and liberate the new transcript. In eukaryotes, the process of transcription from the rest of the cell, sequestered inside of the nucleus. This results in two things: before translation can start, and there is time to "adjust" or "edit" the before translation starts. The physical separation of these processes gives eukaryotes a chance to alter the in such a way as to extend the lifespan of the or even alter the protein product that will from the .

When gene , the cell processes the primary transcript in the nucleus in several ways. Eukaryotic cells   at the 3' end by the addition of a poly-A tail. This run of A residue  by an enzyme that does not use genomic DNA as a template. The have a chemical modification of the 5' end, called a 5'-cap. Data suggests that these modifications both help to increase the lifespan of the (prevent its premature degradation in the cytoplasm) and to help the start translation.

Transcriptomics is a branch of “-omics” that involves studying an organism or population’s transcriptome or, the complete set of all RNA molecules. What kind of information can you obtain from studying the transcriptome(s)? Can you think of any cool scientific questions that a transcriptomic analysis might help resolve? What are some constraints to transcriptomic approaches one might keep in mind when conducting analyses?

Splicing occurs on most eukaryotic in which introns from the sequence and exons together. This can create a much shorter than initially transcribed. Splicing allows cells to mix and match into the final product. As shown in the figure below, this can lead to multiple proteins being coded for by a single gene.