Chemical reactions occur when two or more atoms bond together to form molecules or when bonded atoms are broken apart. The substances that "go in" to a chemical reaction are called the reactants (by convention these are usually listed on the left side of a chemical equation), and the substances found that "come out" of the reaction are known as the products (by convention these are usually found on the right side of a chemical equation). An arrow linking the reactants and products is typically drawn between them to indicate the direction of the chemical reaction. By convention, for one-way reactions, reactants are listed on the left and products on the right of the single-headed arrow. However, you should be able to identify reactants and products of one-way reactions that are written in any orientation (e.g. right-to-left; top-to-bottom, diagonal right-to-left, around a circular arrow, etc.)

Some chemical reactions, such as the one shown above, proceed mostly in one direction. When we depict reactions with a single-headed (unidirectional) arrow we are implying that the reaction is essentially irreversible. However, all reactions can technically proceed in both directions. Reversible reactions are those that can proceed in either direction. In reversible reactions, reactants are turned into products, but when the concentration of product goes beyond a certain threshold (a characteristic particular to a specific reaction), some of these products will be converted back into reactants. This back and forth continues until a certain relative balance between reactants and products occurs—a state called equilibrium. These situations of reversible reactions are often denoted by a chemical equation with a double headed arrow pointing towards both the reactants and products. You will find a continuum of chemical reactions, some proceed mostly in one direction and nearly never reverse, while others change direction easily depending on various factors like the relative concentrations of reactants and products. That is, you will find reactions with all sorts of equilibrium points.

Use of vocabulary: You may have realized that the terms "reactants" and "products" are relative to the direction of the reaction. If you have a reaction that is reversible, though, the products of running the reaction in one direction become the reactants of the reverse. You can label the same compound with two different terms. That can be a bit confusing. So, what is one to do in such cases? The answer is that if you want to use the terms "reactants" and "products" you must be clear about the direction of reaction that you are referring to.

Let's look at an example of a reversible reaction in biology. In human blood, excess hydrogen ions (H+) bind to bicarbonate ions (HCO3-) forming an equilibrium state with carbonic acid (H2CO3). This reaction is readily reversible. If carbonic acid were added to this system, some of it would be converted to bicarbonate and hydrogen ions as the chemical system sought out equilibrium.

The examples above examine "idealized" chemical systems as they might occur in a test-tube. In biological systems, however, equilibrium for a single reaction is rarely obtained as it might be in the lab. In biological systems reactions do not occur in isolation. The concentrations of the reactants and/or products are constantly changing, often with a product of one reaction being a reactant for another reaction. These linked reactions form what are known as biochemical pathways. The immediate example above illustrates this and another caveat. While the reaction between the bicarbonate/proton and carbonic acid is highly reversible, it turns out that physiologically this reaction is usually "pulled" towards the formation of carbonic acid. Why? As shown below, carbonic acid becomes a reactant for another biochemical reaction, its conversion to CO2 and H2O. This conversion reduces the concentration of H2CO3 thus pulling the reaction between bicarbonate and H+ to the right. Moreover, a third reaction, the removal of CO2 and H2 from the system also pull the reaction further to the right. These kinds of reactions are important contributors to maintaining the H+ homeostasis of our blood. The pH scale ranging from acidic to basic with various biological compounds or substances that exist at that particular pH.
Attribution: Marc T. Facciotti (own work) 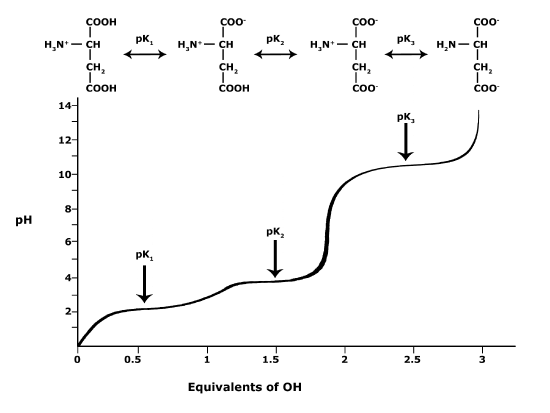