We have just finished studying meiosis, so we know exactly why and how diploids carry two versions of all genes. We know these genes are located on chromosomes, and we understand the dance that these chromosomes perform to ensure that gametes carry only one version of each gene. It’s critical to note that no one knew anything about chromosomes, let alone meiosis, in Mendel’s time (1822-1884). They knew that offspring resemble their parents, though not exactly. They certainly understood that sex was required to get to the next generation. To that degree, they knew “where babies come from”. But there was no concept of haploid gametes, diploid individuals, or genes, the last being, of course, the most exciting part.

Gregor Mendel is (now) famous for having discovered the concept of genes (though he simply called them “factors”). His remarkable research taught us: 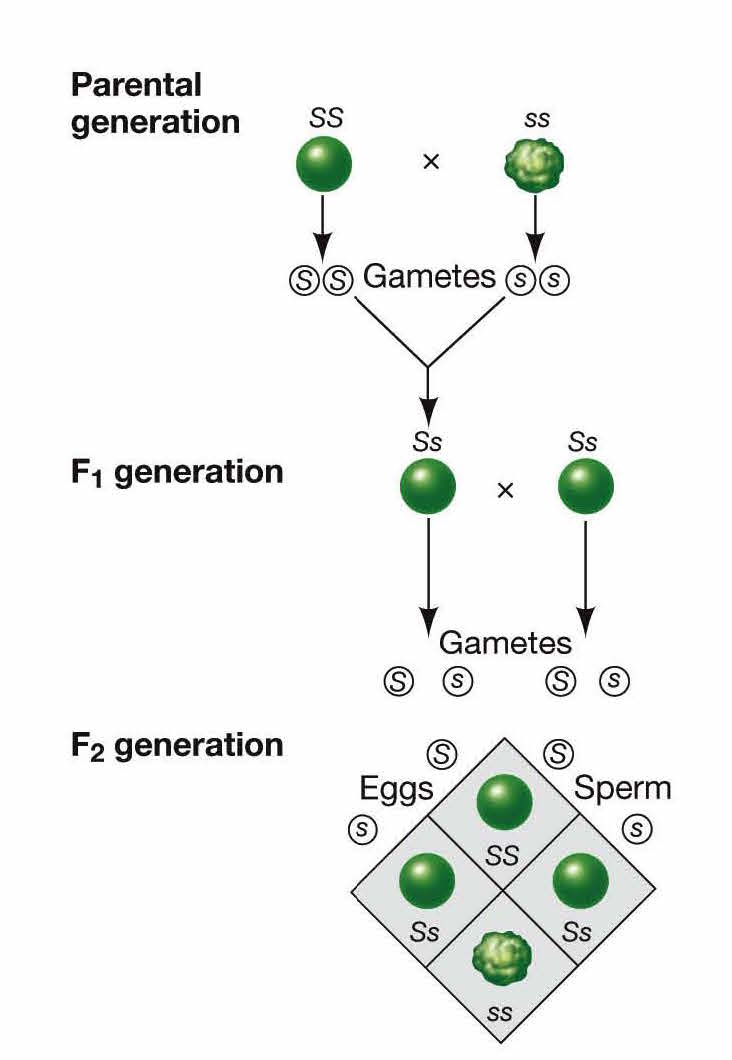 Is each trait shipped off to the next generation independently- on its own boat? If so, we’d expect to see “nonparental” ditypes- some yellow round and some green shrunken seeds as well as the parental types. In other words, seeds that do not match either of their grandparental ditypes.

Mendel found, for the traits he investigated, that the traits were inherited independently, exhibiting the following ratios: 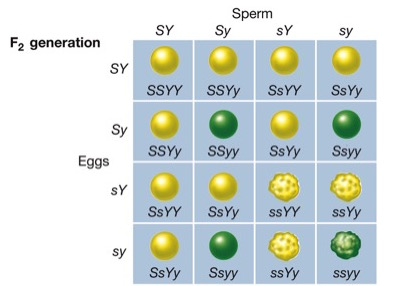 This result indicates that each gamete has an equal chance of inheriting either one of the two versions of each gene. Because there are two genes, each with 2 alleles, and they are inherited independently, there are 4 equally likely gametes produced by the diploid heterozygous parent (reflected in the Punnett square above). The two genes do not influence each other’s inheritance, and are delivered to the next generation independently. This independence of inheritance of the various genes explains the bulk of the observed variation between siblings.

Given what you know- that genes are located on chromosomes, and that chromosomes segregate during meiosis, does Mendel’s observation of indepedent segregation make sense? Are there some cases in which traits determined by different genes might always be inherited together, or inherited together most of the time? Explain your reasoning, based on your understanding of meiosis.

Mendel’s truly remarkable experiments, employing a carefully developed model system, were published, but were not fully appreciated in his time. Mendel reported his results in symposia, and sent copies of his 1865 paper off to important biologists of the day (including Darwin, to whom the conclusions should have been priceless in the development of his theories of evolution), but Mendel’s results seem to have largely fallen on deaf ears. It is tempting to guess that this might have been due to a serious inability to communicate in writing; Mendel was unable to gain employment as a substitute high school teacher due to his inability to pass the writing exam. His critical paper can be found in English translation here http://www.mendelweb.org/Mendel.html, and it seems comprehensible to me, but then, it is a translation, and I do have the benefit of hindsight.

It’s important to point out that Mendel’s work depended on his ability to generate “true-breeding lines”- meaning plants whose progeny (on self-pollination) are all identical to each other, and to their parents. This allowed him to unambiguously follow the segregation (after hybridization) of just one or two easily distinguished traits. True-breeding lines are still used by both basic researchers and plant breeders today- they help reduce random variation in experiments, and provide seeds with predictable traits for farmers. True-breeding lines- lines with homozygosity at all important genes in the genome- can be established in many plants (but not animals) through repeated self-crossing- usually selfing for 6-10 generations. Repeated generations of self-crossing result in an inevitable decline in heterozygosity, as heterozygous plants, when selfed, produce progeny that have only a 50% probability of being heterozygous at any particular gene, while their homozygous progeny produce 100% homozygous progeny. This is illustrated in the diagram below- each pink (heterozygous) snapdragon will produce only 50% pink progeny; the fraction of pink plants, among all plants, will halve with each generation of self-pollination. Animals breeders cannot self-cross, but sometimes attempt to reproduce a winning type (of horses, dogs, or cattle), though inbreeding, that is, repeated crosses of each generation (daughter, granddaughter, great granddaughters) back to a particularly successful sire, or of siblings to one another. This inbreeding approach also inevitably results in increased homozygosity. There are many "breeds" of many domesticated species (dogs, cats, horses etc...). The fact that Angus cattle when bred to other Angus produce Angus calves demonstrate that these cows have considerable homozygosity. They are homozygous and therefore true-breeding for whatever features are characteristic of the breed. Would repeated back-crossing to a champion dog result, after many generations, in dogs that duplicate that champion’s genotype?

QUESTION: Inbreeding is generally regarded as a “bad idea”, as deleterious recessive traits, normally hidden in heterozygotes, are unmasked in the homozygote. Why then do plant breeders get paid good money to produce inbred lines?