1. The figure below represents an isoelectric focusing (IEF) gel on which three protein samples (A, B, and C) were run to completion. The locations of the two electrodes are indicated by the “+” and "-" signs.

The illustration below shows the result of sodium dodecyl sulfate (SDS, and also including ß-mercaptoethanol) polyacrylamide gel electrophoresis of the same samples that were examined on the IEF gel above. The gel was stained with commassie blue dye. The direction of migration was from top to bottom. b) (4) The size markers used on the gel are in the lane labeled “M” and are 10 kilodaltons (kD), 20 kD, 50 kD, and 90 kD in molecular weight. What is the approximate molecular weight of the protein visible in sample “B”?

50 kD, smaller proteins move more rapidly through the gel so the markers go from smallest to largest going from bottom to top of the gel. The band in B migrates with the 50 kD marker.

2. In the space to the left of each of descriptions below, write the letters corresponding to all of the methods to which that statement applies. All correct answers must be given for full credit. (3 points each)

B, C can separate proteins on the basis of pI.

A, C, D, E, G can be readily adapted for purification of large amounts of protein.

D, E can commonly be used to purify a protein from a complex mixture in a single step.

A, F separates proteins on the basis of size/molecular weight.

D requires some knowledge of the activity of the protein for separation.

F proteins are denatured when separated by this method.

3. (15) You have identified a new compound (call it "X") which, when added to a solution, significantly weakens salt bridges without affecting other types of weak chemical interactions. X is added to a tube of hemoglobin at pH7 at equilibrium with air and with a standard concentration of BPG. For each of the following, circle the letter to indicate if the addition of X will lead to an increase (I), decrease (D), or leave unchanged (U) the listed property of the hemoglobin solution (relative to the solution without added X). (3 points each). Numerous salt bridges stabilize the deoxy state. Weakening these salt bridges would favor the oxy state.

4. Indicate which of the following statements about human hemoglobin (Hb) are true (T) or false (F) by circling the letter to the left of the statement. Assume that all solutions containing Hb also initially contain an equimolar concentration of 2,3-bisphosphoglycerate (BPG). (4 points each).

a) The enzyme E will

always consume A faster than in the uncatalyzed reaction.

force the \(\mathrm{\Delta G}\) for the forward reaction to be negative.

make the \(\mathrm{\Delta G^{\circ’}}\) for the reaction less positive

X make B disappear faster than in an uncatalyzed reaction only if the concentration of B is greater than the equilibrium value.

b) Which is likely to bind more tightly to E?

X a structure intermediate between A and B + C

a combination of A, B, and C together

c) Which of the following energy diagrams is most likely to illustrate the progress of the enzyme catalyzed reaction in the direction as written, under standard state conditions? 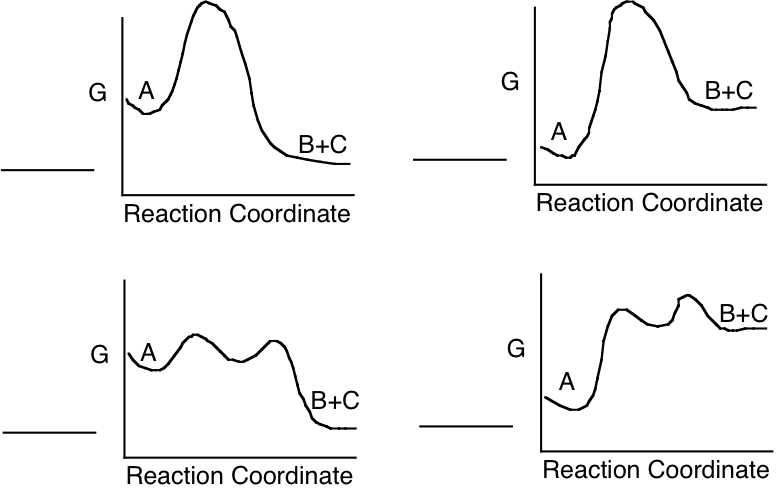 \(\mathbf{\fbox{T}\:\:\:\:\:F}\) Hydrogen bonds between backbone carbonyl oxygen atoms and the hydrogen atoms of backbone NH groups are responsible for the stabilization of an \(\alpha\)-helix in a protein.

\(\mathbf{\fbox{T}\:\:\:\:\:F}\) All proteins with quaternary structure have more than one carboxyl terminus.

\(\mathbf{T\:\:\:\:\: \fbox{F}}\) Cysteine and methionine are the two amino acids that commonly participate in the formation of disulfide bonds. Only Cys

\(\mathbf{T\:\:\:\:\: \fbox{F}}\) Chaperonins are important for bringing proteins together to assemble into complexes because proteins are present at very low concentrations in cells.

(Proteins are present at high concentration and aggregation must be prevented)

9. For each of the biologically derived compounds below, fill in the letters corresponding to ALL of the properties which apply to that compound (3 pts each blank).

A. Net negative charge at pH 7.

B. Contains a cis double bond.

D. Contains a carbon that is bound to both a nitrogen and an oxygen.

C,D, E A membrane sphingolipid that contains a palmitic acid residue and that has a single glucose residue attached directly to a hydroxyl group on the sphingosine backbone.

A A phosphatidic acid containing palmitic and stearic acid residues.

B A glycerolipid containing a palmitic, and two oleic acid residues.

10. The structures below illustrate glyceraldehyde-3-phosphate bound to the active site of triose phosphate isomerase.

b) (6) The histidine at the active site acts as a proton acceptor in one part of the reaction mechanism. The unprotonated form of histidine is a much weaker base (weaker proton acceptor) than is the unprotonated form of lysine. If the histidine in triose phosphate isomerase were replaced with a lysine, would you expect the enzyme to become more or less active? Briefly explain your answer.

Less active. The different shape of the Lys would place it in the wrong location to accept a proton for optimal catalysis. In addition, the His acts as both a proton donor and acceptor in different steps of catalysis and the Lys would be a very weak donor.

11. Several different enzymes have been found that can cleave specific linkages in glycerophospholipids. The specificities of two of these enzymes are:

Two samples of phosphatidyl serine (with two oleic acids as fatty acid side chains) were separately digested with each of these different enzymes. Each digestion resulted in production of two new molecules, with one always being larger (higher in molecular weight) than the other.

Describe the type of structure (e. g. micelle, bilayer, lipid globule, liposome, dissolved in solution, etc.) that each of the following would form if it were mixed vigorously with water (assume pH 7). (3 pts each)

a) The small product of digestion with phospholipase D.

in solution, serine is the small product

b) The large product of digestion with phospholipase D.

c) The small product of digestion with phospholipase A1.

12. You have isolated a protein from human liver and are studying it stability. On heating the protein you find that it first denatures at \(\mathrm{65^{\circ}C}\) (338K). You also measure the enthalpy of folding (\(\mathrm{\Delta H}\)) of this protein to be -85 kJ/mol.

b) (6) If this protein were allowed to spontaneously fold in solution at \(\mathrm{25^{\circ}C}\), what effect would the folding reaction have on the temperature of the surrounding solution? (circle correct answer)

The \(\mathrm{\Delta H}\) is negative so the reaction gives off heat. The heat will raise the temperature of the surrounding liquid.