A. Early Clues and Ongoing Misconceptions

By 1878, a substance in the pus of wounded soldiers derived from cell nuclei (called nuclein) was shown to be composed of 5 bases (the familiar ones of DNA and RNA). The four bases known to make up DNA (as part of nucleotides) were thought to be connected through the phosphate groups in short repeating chains of four nucleotides. By the 1940s, we knew that DNA was a long polymer. Nevertheless, it was still considered too simple to account for genes (see above). After the Hershey and Chase experiments, only a few holdouts would not accept DNA as the genetic material. So, the question remaining was how such a “simple” molecule could account for all the genes, even in so simple an organism as a bacterium. The answer to this question was to lie at least in part in an understanding of the physical structure of DNA, made possible by the advent of X-Ray Crystallography.

If a substance can be crystallized, the crystal will diffract X-rays at angles revealing regular (repeating) structures of the crystal. William Astbury demonstrated that high molecular weight DNA had just such a regular structure. His crystallographs suggested DNA to be a linear polymer of stacked bases (nucleotides), each nucleotide separated from the next by 0.34 nm. Astbury is also remembered for coining the term “molecular biology” to describe his studies. The term now covers as all aspects of biomolecular structure, as well as molecular functions (e.g. replication, transcription, translation, gene regulation…).

In an irony of history, the Russian biologist Nikolai Koltsov had already intuited in 1927 that the basis of genetic transfer of traits would be a "giant hereditary molecule" made up of "two mirror strands that would replicate in a semi-conservative fashion using each strand as a template". A pretty fantastic inference if you think about it since it was proposed long before Watson and Crick and their colleagues worked out the structure of the DNA double-helix!

Maurice Wilkins, an English biochemist, was the first to isolate highly pure, high molecular weight DNA. Working in Wilkins laboratory, Rosalind Franklin was able to crystalize this DNA and produce very high-resolution X-Ray diffraction images of the DNA crystals. Franklin’s most famous (and definitive) crystallography was “Photo 51”, shown below. This image confirmed Astbury’s 0.34 nm repeat dimension and revealed two more numbers, 3.4 nm and 2 nm, reflecting additional repeat structures in the DNA crystal. When James Watson and Francis Crick got hold of these numbers, they used them along with other data to build DNA models out of nuts, bolts and plumbing. Their models eventually revealed DNA to be a pair of antiparallel complementary of nucleic acid polymers…, shades of Koltsov’s mirror-image macromolecules! Each strand is a string of nucleotides linked by phosphodiester bonds, the two strands held together in a double helix by complementary H-bond interactions.

Let’s look at the evidence for these conclusions and as we do, refer to the two illustrations of the double helix below. Recalling that Astbury’s 0.34 nm dimension was the distance between successive nucleotides in a DNA strand, Watson and Crick surmised that the 3.4 nm repeat was a structurally meaningful 10-fold multiple of Astbury’s number. When they began building their DNA models, they realized from the bond angles connecting the nucleotides that the strand was forming a helix, from which they concluded that the 3.4 nm repeat was the pitch of the helix, i.e., the distance of one complete turn of the helix. This meant that there were 10 bases per turn of the helix. They further reasoned that the 2.0 nm number might reflect the diameter of helix. When their scale model of a single stranded DNA helix predicted a helical diameter much less than 2.0 nm, they were able to model a double helix that more nearly met the 2.0 nm diameter requirement. In building their double helix, Watson and Crick realized that bases in opposing strands would come together to form H-bonds, holding the helix together. However, for their double helix to have a constant diameter of 2.0 nm, they also realized that the smaller pyrimidine bases, Thymine (T) and Cytosine (C), would have to H-bond to the larger purine bases, Adenine (A) and Guanosine (G).

Now to the question of how a “simple” DNA molecule could have the structural diversity needed to encode thousands of different polypeptides and proteins. In early studies, purified E. coli DNA was chemically hydrolyzed down to nucleotide monomers. The hydrolysis products contained nearly equal amounts of each base, reinforcing the notion that DNA was that simple molecule that could not encode genes. But Watson and Crick had private access to revealing data from Erwin Chargaff. Chargaff had determined the base composition of DNA isolated from different species, including E. coli. He found that the base composition of DNA from different species was not always equimolar, meaning that for some species, the DNA was not composed of equal amounts of each of the four bases (see some of this data below).

The mere fact that DNA from some species could have base compositions that deviated from equimolarity put to rest the argument that DNA had to be a very simple sequence. Finally, it was safe to accept that to accept the obvious, namely that DNA was indeed the “stuff of genes”.

Chargaff’s data also showed a unique pattern of base ratios. Although base compositions could vary between species, the A/T and G/C ratio was always one, for every species. Likewise the ratio of (A+C)/(G+T) and (A+G)/(C+T). From this information, Watson and Crick inferred that A (a purine) would H-bond with T (a pyrimidine), and G (a purine) would H-bond with C (a pyrimidine) in the double helix. When building their model with this new information, they also found H-bonding between the complementary bases would be maximal only if the two DNA strands were antiparallel, leading to the most stable structure of the double helix.

Watson and Crick published their conclusions about the structure of DNA in 1953 (Click here to read their seminal article: Molecular Structure of Nucleic Acids: A Structure for Deoxyribose Nucleic Acid. Their article is also famous for predicting a semi-conservative mechanism of replication, something that had been predicted by Koltsov 26 years earlier, albeit based on intuition… and much less evidence!

Watson, Crick and Wilkins shared a Nobel Prize in 1962 for their work on DNA structure. Unfortunately, Franklin died in 1958 and Nobel prizes were not awarded posthumously. There is still controversy about why Franklin did not get appropriate credit for her role in the work. But she has been getting well-deserved, long-delayed recognition, including a university in Chicago named in her honor!

169 Unraveling the Structure of DNA

Confirmation of Watson & Crick’s suggestion of semiconservative replication came from Meselson and Stahl’s very elegant experiment, which tested the three possible models of replication shown below.

Meselson and Stahl’s predictions and their experimental design are shown below. Meselson and Stahl knew that 14N-labeled and 15N-labeled DNA would form separate bands after centrifugation on CsCl chloride density gradients. They tested their predictions by purifying and centrifuging the DNA from the 15N-labeled cells grown in 14N medium for one generation. They found that this DNA formed a single band with a density between that of 15N-labeled DNA and 14N-labeled DNA. This result eliminated a conservative model of DNA replication (as Watson and Crick also predicted. That left two possibilities: replication was either semiconservative or dispersive. The dispersive model was eliminated when DNA isolated from cells grown for a 2nd generation on 14N were shown to contain two bands of DNA on the CsCl density gradients.

We understood from the start of the 20th century that chromosomes contained genes. Therefore, it becomes necessary to understand the relationship between chromosomes, chromatin, DNA and genes. As noted earlier, chromosomes are a specialized, condensed version of chromatin, with key structural features shown below.

We now know that the compact structure of a chromosome prevents damage to the DNA during cell division. This damage can occur when forces on centromeres generated by mitotic or meiotic spindle fibers pull chromatids apart. As the nucleus breaks down during mitosis or meiosis, late 19th century microscopists saw chromosomes condense from the dispersed cytoplasmic background. These chromosomes remained visible as they separated, moving to opposite poles of the cell during cell division. Such observations of chromosome behavior during cell division pointed to their role in heredity. A computer- colorized cell in mitosis is shown below. It is possible to distinguish one chromosome from another by karyotyping. When cells in metaphase of mitosis are placed under pressure, they burst and the chromosomes spread apart. Such a chromosome spread is shown below. By the early 1900s, the number, sizes and shapes of chromosomes were shown to be species-specific. What’s more, a close look at chromosome spreads revealed that chromosomes came in morphologically matched pairs. This was so reminiscent of Gregor Mendel’s paired hereditary factors that chromosomes were then widely accepted as the structural seat of genetic inheritance. Cutting apart micrographs like the one above and pairing the chromosomes by their morphology generates a karyotype. Paired human homologs are easily identified in the colorized micrograph below. 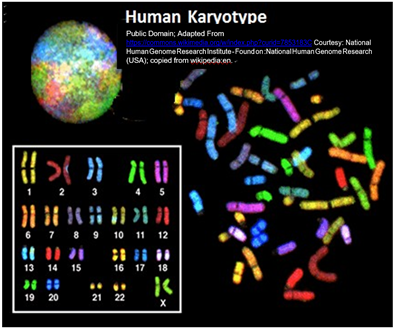