Solid growth media usually contains agar (image 1), which is a mixture of polysaccharides derived from red algae. It is used as a solidification agent because it (1) is not broken down by bacteria, (2) contains no nutrients that can be used by bacteria and (3) melts at high temperatures, and yet is solid at temperatures used for most bacterial growth. Solid growth media is used in the following forms: agar plates, agar slants, and agar deeps. To make agar deeps or agar slants, melted agar is poured into a test tube and then allowed to solidify vertically (agar deep), or at a slant (agar slant). Agar plates are made by pouring melted agar into a petri dish. 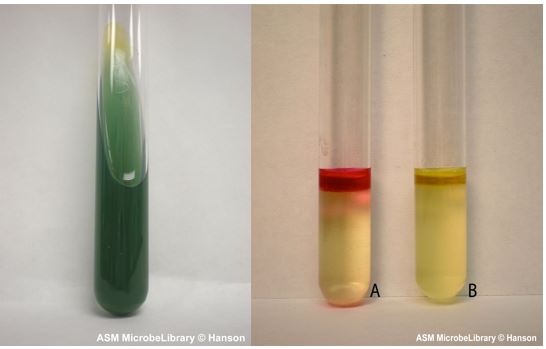 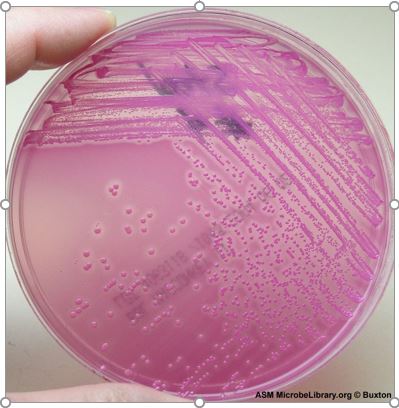 Growth media can be categorized based on their chemical constituents, or the purpose for which they are used. 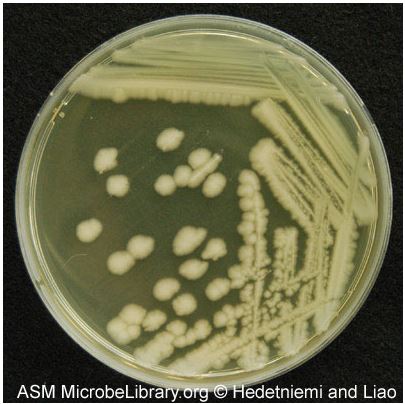 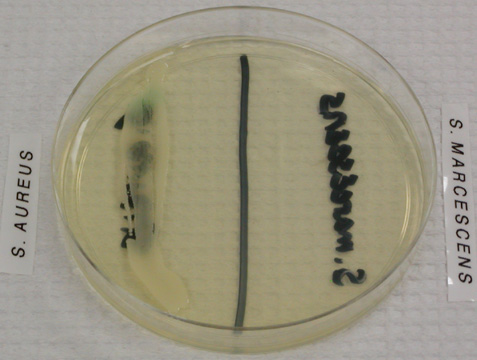 Image 5: Staphylococcus aureus, a Gram positive organism, grows on this PEA plate while Serratia marcescens, a Gram negative organism, does not. Image by WelcometoMicrobugz. URL: https://www.austincc.edu/microbugz/p...cohol_agar.php Mannitol-salt agar (MSA): Differential and selective growth medium. This medium contains 7.5% NaCl, the carbohydrate mannitol and the pH indicator phenol red (yellow at pH 8.4). It is selective for staphylococci due to the high concentration of NaCl, and differentiates based on the ability to ferment mannitol. Staphylococci that ferment mannitol produce acidic byproducts that cause the phenol red to turn yellow. This produces a yellow halo in the medium around the bacterial growth.

Eosin-methylene blue agar (EMB): Differential and selective growth medium. This medium contains peptone, lactose, sucrose and the dyes eosin Y and methylene blue. Gram positive organisms are inhibited by the dyes, so this medium is selective for Gram negative bacteria. The medium differentiates based on the ability to ferment lactose (and/or sucrose.) Organisms that cannot ferment either of the sugars produce colorless colonies. Organisms that ferment the sugars with some acid production produce pink or purple colonies; organisms that ferment the sugars and produce large amounts of acid form colonies with a green metallic sheen. This medium is commonly used to detect the presence of fecal coliforms (like E. coli)—bacteria that grow in the intestines of warm-blooded animals. Fecal coliforms produce large amounts of acid when fermenting lactose and/or sucrose; non-fecal coliforms will produce less acid and appear as pink or purple colonies.