All living organisms are composed of cells, including each of us and plants. Life started as a single cell. Plant cells have a cell wall, chloroplasts, and a central vacuole. The plant cell wall, whose primary component is cellulose, protects the cell, provides structural support, and gives shape to the cell.

Your body has many kinds of cells, each specialized for a specific purpose. Just as a home is made from a variety of building materials, the human body is constructed from many cell types. For example, epithelial cells protect the surface of the body and cover the organs and body cavities within. Bone cells help to support and protect the body. Cells of the immune system fight invading bacteria. Additionally, blood and blood cells carry nutrients and oxygen throughout the body while removing carbon dioxide. Each of these cell types plays a vital role during the growth, development, and day-to-day maintenance of the body. In spite of their enormous variety, however, cells from all organisms—even ones as diverse as bacteria, onion, and human—share certain fundamental characteristics.

A cell is the smallest unit of a living thing. A living thing, whether made of one cell (like bacteria) or many cells (like a human), is called an organism. Thus, cells are the basic building blocks of all organisms.

Several cells of one kind that interconnect with each other and perform a shared function form tissues, several tissues combine to form an organ (your stomach, heart, or brain), and several organs make up an organ system (such as the digestive system, circulatory system, or nervous system). Several systems that function together form an organism (like a human being). Here, we will examine the structure and function of cells.

How do we study cells?

Cells vary in size. With few exceptions, individual cells cannot be seen with the naked eye, so scientists use microscopes (micro- = “small”; -scope = “to look at”) to study them. A microscope is an instrument that magnifies an object. Most photographs of cells are taken with a microscope, and these images can also be called micrographs.

The optics of a microscope’s lenses change the orientation of the image that the user sees. A specimen that is right-side up and facing right on the microscope slide will appear upside-down and facing left when viewed through a microscope, and vice versa. Similarly, if the slide is moved left while looking through the microscope, it will appear to move right, and if moved down, it will seem to move up. This occurs because microscopes use two sets of lenses to magnify the image. Because of the manner by which light travels through the lenses, this system of two lenses produces an inverted image (binocular, or dissecting microscopes, work in a similar manner, but include an additional magnification system that makes the final image appear to be upright).

The microscopes we use today are far more complex than those used in the 1600s by Antony van Leeuwenhoek, a Dutch shopkeeper who had great skill in crafting lenses. Despite the limitations of his now-ancient lenses, van Leeuwenhoek observed the movements of protista (a type of single-celled organism) and sperm, which he collectively termed “animalcules.”

In a 1665 publication called Micrographia, experimental scientist Robert Hooke coined the term “cell” for the box-like structures he observed when viewing cork tissue through a lens. In the 1670s, van Leeuwenhoek discovered bacteria and protozoa. Later advances in lenses, microscope construction, and staining techniques enabled other scientists to see some components inside cells.

By the late 1830s, botanist Matthias Schleiden and zoologist Theodor Schwann were studying tissues and proposed the unified cell theory, which states that:

Cells fall into one of two broad categories: prokaryotic and eukaryotic. Only the predominantly single-celled organisms of the domains Bacteria and Archaea are classified as prokaryotes (pro- = “before”; -kary- = “nucleus”). Animals, plants, fungi, and protists are all eukaryotes (eu- = “true”) and are made up of eukaryotic cells.

All cells share four common components: 1) a plasma membrane, an outer covering that separates the cell’s interior from its surrounding environment; 2) cytoplasm, consisting of a jelly-like cytosol within the cell in which other cellular components are found; 3) DNA, the genetic material of the cell; and 4) ribosomes, which synthesize proteins. However, prokaryotes differ from eukaryotic cells in several ways.

A prokaryote is a simple, mostly single-celled (unicellular) organism that lacks a nucleus, or any other membrane-bound organelle. We will shortly come to see that this is significantly different in eukaryotes. Prokaryotic DNA is found in a central part of the cell: the nucleoid (Figure 2). 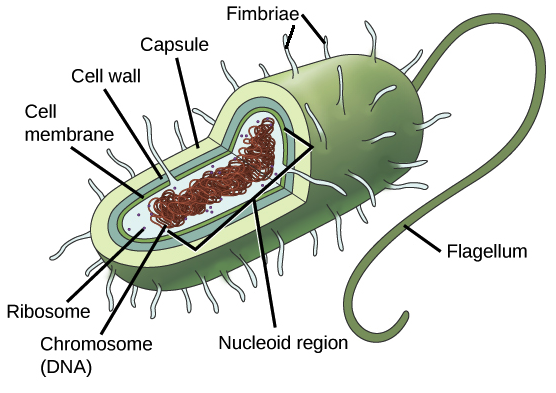 Figure 2. This figure shows the generalized structure of a prokaryotic cell. All prokaryotes have chromosomal DNA localized in a nucleoid, ribosomes, a cell membrane, and a cell wall. The other structures shown are present in some, but not all, bacteria.

Have you ever heard the phrase “form follows function?” It’s a philosophy practiced in many industries. In architecture, this means that buildings should be constructed to support the activities that will be carried out inside them. For example, a skyscraper should be built with several elevator banks; a hospital should be built so that its emergency room is easily accessible.

Our natural world also utilizes the principle of form following function, especially in cell biology, and this will become clear as we explore eukaryotic cells. Unlike prokaryotic cells, eukaryotic cells have: 1) a membrane-bound nucleus; 2) numerous membrane-bound organelles such as the endoplasmic reticulum, Golgi apparatus, chloroplasts, mitochondria, and others; and 3) several, rod-shaped chromosomes. Because a eukaryotic cell’s nucleus is surrounded by a membrane, it is often said to have a “true nucleus.” The word “organelle” means “little organ,” and, as already mentioned, organelles have specialized cellular functions, just as the organs of your body have specialized functions.

At this point, it should be clear to you that eukaryotic cells have a more complex structure than prokaryotic cells. Organelles allow different functions to be compartmentalized in different areas of the cell. Before turning to organelles, let’s first examine two important components of the cell: the plasma membrane and the cytoplasm.

a. Plasma membrane Like prokaryotes, eukaryotic cells have a plasma membrane, a phospholipid bilayer with embedded proteins that separates the internal contents of the cell from its surrounding environment. The plasma membrane controls the passage of organic molecules, ions, water, and oxygen into and out of the cell. Wastes (such as carbon dioxide and ammonia) also leave the cell by passing through the plasma membrane.

The cytoplasm is the entire region of a cell between the plasma membrane and the nuclear envelope (a structure to be discussed shortly). It is made up of organelles suspended in the gel-like cytosol, the cytoskeleton, and various chemicals. Even though the cytoplasm consists of 70 to 80 percent water, it has a semi-solid consistency, which comes from the proteins within it.

Typically, the nucleus is the most prominent organelle in a cell. The nucleus (plural = nuclei) houses the cell’s DNA and directs the synthesis of ribosomes and proteins.

Ribosomes are the cellular structures responsible for protein synthesis. Because proteins synthesis is an essential function of all cells (including enzymes, hormones, antibodies, pigments, structural components, and surface receptors), ribosomes are found in practically every cell. Ribosomes are particularly abundant in cells that synthesize large amounts of protein. For example, the pancreas is responsible for creating several digestive enzymes and the cells that produce these enzymes contain many ribosomes.

Mitochondria (singular = mitochondrion) are often called the “powerhouses” or “energy factories” of a cell because they are responsible for making adenosine triphosphate (ATP), the cell’s main energy-carrying molecule. ATP represents the short-term stored energy of the cell. Cellular respiration is the process of making ATP using the chemical energy found in glucose and other nutrients. In mitochondria, this process uses oxygen and produces carbon dioxide as a waste product. In fact, the carbon dioxide that you exhale with every breath comes from the cellular reactions that produce carbon dioxide as a byproduct.

Peroxisomes are small, round organelles enclosed by single membranes. They carry out oxidation reactions that break down fatty acids and amino acids. They also detoxify many poisons that may enter the body. (Many of these oxidation reactions release hydrogen peroxide, H2O2, which would be damaging to cells; however, when these reactions are confined to peroxisomes, enzymes safely break down the H2O2 into oxygen and water.) For example, alcohol is detoxified by peroxisomes in liver cells.

Vesicles and vacuoles are membrane-bound sacs that function in storage and transport. Other than the fact that vacuoles are somewhat larger than vesicles, there is a very subtle distinction between them: The membranes of vesicles can fuse with either the plasma membrane or other membrane systems within the cell. Additionally, some agents such as enzymes within plant vacuoles break down macromolecules. The membrane of a vacuole does not fuse with the membranes of other cellular components.

The smooth ER is a series of interconnected membranous sacs and tubules that collectively synthesizes lipids.

The rough ER is a series of interconnected membranous sacs and tubules that collectively modifies proteins.

We have already mentioned that vesicles can bud from the ER and transport their contents elsewhere, but where do the vesicles go? Before reaching their final destination, the lipids or proteins within the transport vesicles still need to be sorted, packaged, and tagged so that they wind up in the right place. Sorting, tagging, packaging, and distribution of lipids and proteins takes place in the Golgi apparatus (also called the Golgi body), a series of flattened membranes.

The cell wall is a rigid covering that protects the cell, provides structural support, and gives shape to the cell. The major organic molecule in the plant cell wall is cellulose, a polysaccharide made up of glucose units. Have you ever noticed that when you bite into a raw vegetable, like celery, it crunches? That’s because you are tearing the rigid cell walls of the celery cells with your teeth.

Like the mitochondria, chloroplasts have their own DNA and ribosomes, but chloroplasts have an entirely different function. Chloroplasts are plant cell organelles that carry out photosynthesis. Photosynthesis is the series of reactions that use carbon dioxide, water, and light energy to make glucose and oxygen. This is a major difference between plants and animals; plants (autotrophs) are able to make their own food, like sugars, while animals (heterotrophs) must ingest their food. 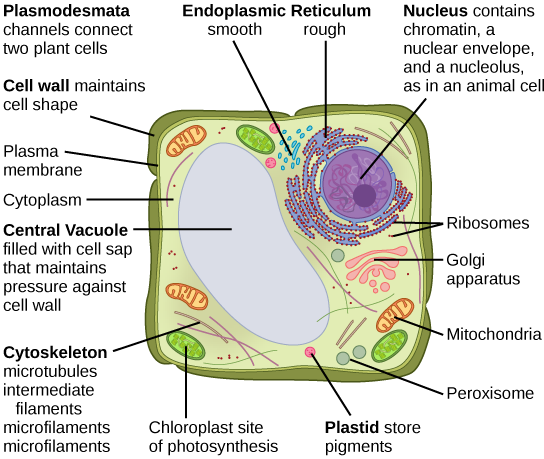 Figure 3. Common structure of a plant cell, including the function of some organelles.

- Chlorophyll: green pigment that captures the light energy that drives the light reactions of photosynthesis

- Chromosome: structure within the nucleus that is made up of chromatin that contains DNA, the hereditary material

- Electron microscope: an instrument that magnifies an object using a beam of electrons passed and bent through a lens system to visualize a specimen

- Light microscope: an instrument that magnifies an object using a beam visible light passed and bent through a lens system to visualize a specimen

- Nucleoid: central part of a prokaryotic cell in which the chromosome is found

- Organelle: compartment or sac within a cell

- Prokaryote: unicellular organism that lacks a nucleus or any other membrane-bound organelle

- Unified cell theory: a biological concept that states that all organisms are composed of one or more cells; the cell is the basic unit of life, and new cells arise from existing cells