The first and ultimate goal of every plant is photosythesis. If a plant is multicellular, it usually develops relatively large, flat structures which goal is to catch sun rays. Terrestrial plants are no exception; most probably, they started to build their body with organs similar to present day leaves.

A leaf is lateral photosynthetic organ of shoot with restricted growth. Its functions are photosynthesis, respiration, transpiration, and synthesis Figure \(\PageIndex{1}\) Systems of organs and organs of bipolar plant.

of secondary chemicals. Features of a leaf (i.e., characters help to distinguish it) include having a bud in the axil, not growing by apex, not producing new leaves or shoots, and having hierarchal morphology (see below).

Morphology of the Leaf Figure \(\PageIndex{4}\) The example of self-similarity. 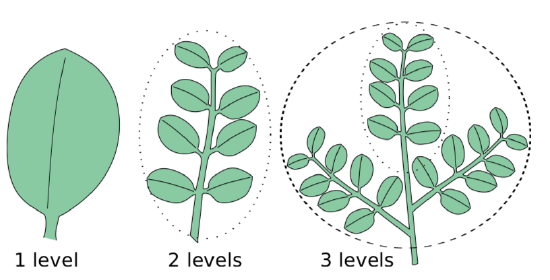 Figure \(\PageIndex{5}\) Leaves with one, two and three levels of hierarchy. Please note that the last leaf is ovate on the first and second level but circular on the third level of hierarchy.

General characters of leaf include stipules and other structures located near leaf base (Figure \(\PageIndex{6}\)): sheath (typical for grasses and other liliids) and ocrea (typical for buckwheat family, Polygonaceae).

Figure \(\PageIndex{6}\) From left to right: sheath, stipules and ocrea.

Repetitive characters are the shape of the leaf (Figure \(\PageIndex{7}\)), leaf dissection, and whether the blade is stalked (has petiole) or not.

Terminal characters are applicable only to terminal leaflets of leaves. These characters (Figure \(\PageIndex{9}\)) are the shape of the leaf blade base, the leaf tip, the type of margin, the surface, and the venation. The base of the leaf blade could be rounded, truncate (straight), cuneate, and cordate. The leaf apex could be rounded, mucronate, acute, obtuse, and acuminate. Leaf margin variants are entire (smooth) and toothed: dentate, serrate, double serrate and crenate. Leaf veins are vascular bundles coming to the leaf from stem. Frequently, there is a main vein and lateral veins (veins of second order). There are multiple classifications of leaf venation; and example is shown on the Figure \(\PageIndex{10}\).

To characterize the whole leaf, one might use the following plan: 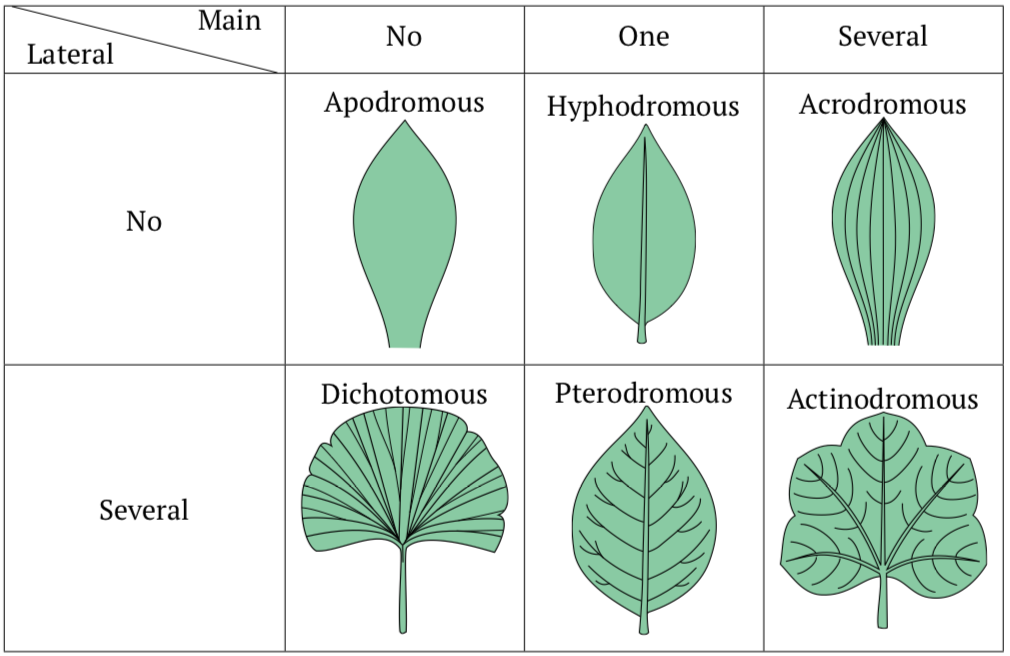 1. General characters (leaf as a whole):

4. Third level of hierarchy, and so on

(a) base of leaf blade (rounded, truncate, cuneate, cordate);

Heterophyllyh refers to a plant having more than one kind of leaf. A plant can have both juvenile leaves and adult leaves, water leaves and air leaves, or sun leaves and shade leaves. A leaf mosaics refers to the distribution of leaves in a single plane perpendicular to light rays, this provides the least amount of shading for each leaf.

Leaves have seasonal lives; they arise from the SAM through leaf primordia, and grow via marginal meristems. The old leaves separate from the plant with an abscission zone.

The famous poet and writer Johann Wolfgang Goethe is also considered a founder of plant morphology. He is invented an idea of a “primordial plant” which he called “Urpflanze” where all organs were modifications of several primordial ones. In accordance to Goethe’s ideas, plant morphology considers that many visible plant parts are just modifications of basic plant organs.

Modifications of the leaf include spines or scales for defense, tendrilsorgan modifications using for climbing for support, traps, “sticky tapes”, or urns for interactions (in that case, catching insects), plantlets for expansion, and succulent leaves for storage. Plantlets are little mini plants that grow on the main plant and then fall off and grow into new plants; the most known example is Kalanchoë (“mother of thousands”) which frequently uses plantlets to reproduce. Plants that have insect traps of various kinds are called carnivorous plants (in fact, they are still photoautotrophs and use insect bodied only as fertilizer). Several types of these are the cobra lily (Darlingtonia), various pitcher plants (Nepenthes, Cephalotus, Sarracenia), the butterwort (Utricularia), the sundew (Drosera), and the best known, the Venus flytrap (Dionaea).

Anatomy of the Leaf

Anatomically, leaves consist of epidermis with stomata, mesophyll (kind of parenchyma) and vascular bundles, or veins (Figure \(\PageIndex{12}\)). The mesophyll, in turn, has palisade and spongy variants. Palisade mesophyll is located in the upper layer and serves to decrease the intensity of sunlight for the spongy mesophyll, and also catches slanted sun rays. The palisade mesophyll consists of long, thin, tightly arranged cells with chloroplasts mostly along the sides. The spongy mesophyll are roughly packed, they are rounded and have multiple chloroplasts (Figure \(\PageIndex{11}\)). When a typical stem vascular bundle (which has xylem under phloem) enters the leaf, xylem usually faces upwards, whereas phloem faces downwards. Bundles of C\(_4\)-plants have additional bundle sheath cells in their vascular bundles.

The stomata assists in gas exchange, cooling and water transpiration. There are two guard cells paired together on each side of the stoma. These guard cells are kidney beans shaped and have a thicker cell wall in the middle. The thicker cell wall on the inside makes use of the so-called “bacon effect” (when bacon slice curved on the Figure \(\PageIndex{12}\) Left to right, top to bottom: leaf of sclerophyte Pinus, leaf of salt-avoiding (succulent-like) halophyte Salsola (epidermis is at the bottom), shade leaf of Sambucus, leaf of Syringa with guards cells (bottom left). Magnifications ×100 (first) and ×400 (others).

frying pan) because thinner part of the cell wall is more flexible and therefore bends easier. The same curving effect might be seen in blowing air balloon with the piece of scotch on one side. The opening of the stoma starts from K\(^+\) accumulation, then osmosis inflates guard cells, and finally the uneven cell wall facilitates the opening of stoma. The stoma closes when the potassium ions exit the cell and water amount decreases in its vacuoles (Fig [STOMA]).

In most cases, the lower epidermis contains more stomata than the upper epidermis because the bottom of the leaf is cooler and transpiration there is safer. A similar logic is applicable to trichomes (hairs): they are also more frequent on the lower side of the leaf.

When plants adapt to the particular environment conditions, leaves usually respond first. Conversely, one can estimate the ecology of plant simply looking on its leaves.

In regards to water, there are four main types of plants: xerophytes, mesophytes, hygrophytes, and hydrophytes. Xerophytes are adapted to the scarce water (Figure \(\PageIndex{12}\)), they could be sclerophytes (usually with prickly and/or rich of sclerenchyma leaves) and succulents (with water-accumulating stems or leaves). Mesophytes are typical plants which adapt to regular water. Hygrophytes live in constantly wet environment, their leaves adapted to high transpiration and sometimes even to guttation (excretion of water drops). Hydrophytes grow in water, their leaves are frequently highly dissected to access more gases dissolved in water, and their leaf petioles and stems have air canals to supply underwater organs with gases.

Leaves will also reflect adaptations to the substrate, ecological forms named psammophytes (grow on sand), petrophytes (grow on rocks), and rheophytes (grow in fast springs). The latter plants frequently have serious simplifications in their body plan, their leaves and stems are often reduced to form a thallus-like body.