Describe the layers of the epidermis

Layers of the Epidermis

The epidermis is the outermost layer of our skin. It is the layer we see with our eyes. It contains no blood supply of its own—which is why you can shave your skin and not cause any bleeding despite losing many cells in the process. Assuming, that is, you don’t nick your skin to deep, where the blood supply is actually found. The epidermis is itself divided into at least four separate parts. A fifth part is present in some areas of our body. In order from the deepest layer of the epidermis to the most superficial, these layers (strata) are the:

The stratum basale, also called the stratum germinativum, is the basal (base) layer of the epidermis. It is the layer that’s closest to the blood supply lying underneath the epidermis.

This layer is one of the most important layers of our skin. This is because it contains the only cells of the epidermis that can divide via the process of mitosis, which means that skin cells germinate here, hence the word germinativum.

This protein is appropriately called keratin. Keratin makes our skin tough and provides us with much-needed protection from microorganisms, physical harm, and chemical irritation.

Millions of these new cells arise in the stratum basale on a daily basis. The newly produced cells push older cells into the upper layers of the epidermis with time. As these older cells move up toward the surface, they change their shape, nuclear, and chemical composition. These changes are, in part, what give the strata their unique characteristics.

Once the keratinocytes leave the stratum granulosum, they die and help form the stratum lucidum. This death occurs largely as a result of the distance the keratinocytes find themselves from the rich blood supply the cells of the stratum basale lie on top off. Devoid of nutrients and oxygen, the keratinocytes die as they are pushed towards the surface of our skin. The stratum lucidum is a layer that derives its name from the lucid (clear/transparent) appearance it gives off under a microscope. This layer is only easily found in certain hairless parts of our body, namely the palms of our hands and the soles of our feet. Meaning, the places where our skin is usually the thickest.

From the stratum lucidum, the keratinocytes enter the next layer, called the stratum corneum (the horny layer filled with cornified cells). This the only layer of skin we see with our eyes. The keratinocytes in this layer are called corneocytes. They are devoid of almost all of their water and they are completely devoid of a nucleus at this point. They are dead skin cells filled with the tough protein keratin. In essence, they are a protein mass more so than they are a cell. The corneocytes serve as a hard protective layer against environmental trauma, such as abrasions, light, heat, chemicals, and microorganism. The cells of the stratum corneum are also surrounded by lipids (fats) that help repel water as well. These corneocytes are eventually shed into the environment and become part of the dandruff in our hair or the dust around us, which dust mites readily munch on. This entire cycle, from new keratinocyte in the straum basale to a dead cell flaked off into the air, takes between 25–45 days. 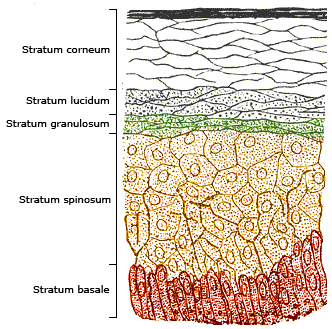