Why is the atmosphere important?

The atmosphere plays an important part in maintaining Earth’s freshwater supply. It is part of the water cycle. It refills lakes and rivers with precipitation. The atmosphere also provides organisms with gases needed for life. It contains oxygen for cellular respiration and carbon dioxide for photosynthesis. Air pollution comes from many sources, including waste expelled into the atmosphere by numerous factories.

Earth’s atmosphere is vast. However, it has been seriously polluted by human activities. Air pollution consists of chemical substances and particles released into the atmosphere, mainly by human actions. The major cause of outdoor air pollution is the burning of fossil fuels. Power plants, motor vehicles, and home furnaces all burn fossil fuels and contribute to the problem (see Table below). Ranching and using chemicals such as fertilizers also cause air pollution. Erosion of soil in farm fields and construction sites adds dust particles to the air as well. Fumes from building materials, furniture, carpets, and paint add toxic chemicals to indoor air.

In humans, air pollution causes respiratory and cardiovascular problems. In fact, more people die each year from air pollution than automobile accidents. Air pollution also affects ecosystems worldwide by causing acid rain, ozone depletion, and global warming. Ways to reduce air pollution from fossil fuels include switching to nonpolluting energy sources (such as solar energy) and using less energy. What are some ways you could use less energy?

All life relies on a relatively narrow range of pH, or acidity. That’s because protein structure and function are very sensitive to pH. Air pollution can cause precipitation to become acidic. Nitrogen and sulfur oxides, mainly from motor vehicle exhaust and coal burning, create acids when they combine with water in the air. The acids lower the pH of precipitation, forming acid rain. If acid rain falls on the ground, it may damage soil and soil organisms. If it falls on plants, it may kill them (see Figure below). If it falls into lakes, it lowers the pH of the water and kills aquatic organisms. 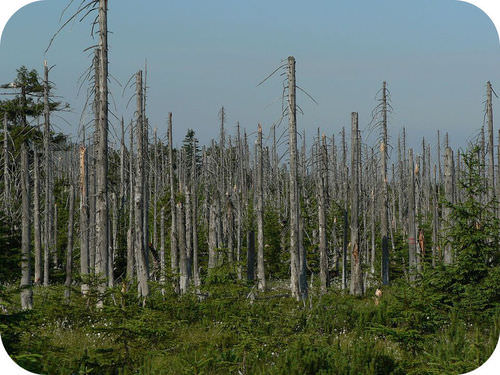 Effects of Acid Rain. These trees in a European forest were killed by acid rain.

There are two types of ozone. You can think of them as bad ozone and good ozone. Both are affected by air pollution.

Unfortunately, the layer of good ozone is being destroyed by air pollution. The chief culprits are chlorine and bromine gases. They are released in aerosol sprays, coolants, and other products. Loss of ozone has created an ozone hole over Antarctica. Ozone depletion results in higher levels of UV radiation reaching Earth. In humans, this increases skin cancers and eye cataracts. It also disturbs the nitrogen cycle, kills plankton, and disrupts ocean food webs. The total loss of the ozone layer would be devastating to most life. Its rate of loss has slowed with restrictions on pollutants, but it is still at risk.