How long can a person live with HIV?

Years ago, a diagnosis of an HIV infection was a death sentence. Not today. With the proper medical treatment, an individual can live well over 10 or 20 or more productive years with an AIDS diagnosis. One of the most famous individuals with HIV is Earvin “Magic” Johnson, a retired professional basketball player. He was diagnosed in 1991. Over 20 years later, he is still doing well.

Human immunodeficiency virus (HIV) is a virus that attacks the immune system. An example of HIV is shown in Figure below. Many people infected with HIV eventually develop acquired immune deficiency syndrome (AIDS). This may not occur until many years after the virus first enters the body. HIV is a virus that attacks cells of the immune system.

HIV is transmitted, or spread, through direct contact of mucous membranes or body fluids such as blood, semen, or breast milk. As shown in Figure below, transmission of the virus can occur through sexual contact or the use of contaminated hypodermic needles. It can also be transmitted through an infected mother’s blood to her baby during late pregnancy or birth or through breast milk after birth. In the past, HIV was also transmitted through blood transfusions. Because donated blood is now screened for HIV, the virus is no longer transmitted this way. HIV is not spread through saliva, touching or in swimming pools. HIV may be transmitted in all of the ways shown here. Based on how HIV is transmitted, what can people do to protect themselves from becoming infected? What choices can they make to prevent infection?

HIV and the Immune System This diagram shows how HIV infects and destroys T cells.

HIV is able to evade the immune system and keep destroying T cells. This occurs in two ways:

As time passes, the number of HIV copies keeps increasing, while the number of helper T cells keeps decreasing. The graph in Figure below shows how the number of T cells typically declines over a period of many years following the initial HIV infection. As the number of T cells decreases, so does the ability of the immune system to defend the body. As a result, an HIV-infected person develops frequent infections. Medicines can slow down the virus but not get rid of it, so there is no cure at present for HIV infections or AIDS. There also is no vaccine to immunize people against HIV infection, but scientists are working to develop one. 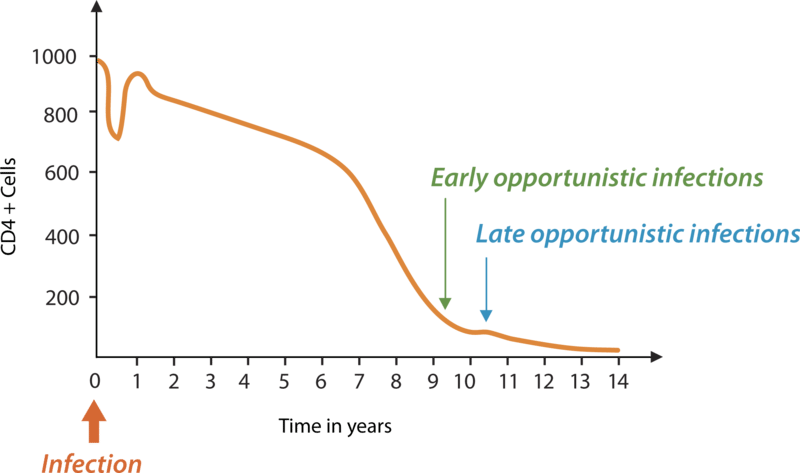 It typically takes several years after infection with HIV for the drop in T cells to cripple the immune system. What do you think explains the brief spike in T cells that occurs early in the HIV infection shown here?

AIDS and HIV were first identified in 1981. Scientists think that the virus originally infected monkeys but then jumped to human populations, probably sometime during the early to mid-1900s. This most likely occurred in West Africa, but the virus soon spread around the world (see Figure below). Since then, HIV has killed more than 25 million people worldwide. The hardest hit countries are in Africa, where medicines to slow down the virus are least available. The worldwide economic toll of HIV and AIDS has also been enormous. HIV Research: Beyond the Vaccine

Over the past 15 years, the number of people who die of AIDS each year in the United States has dropped by 70 percent. But AIDS remains a serious public health crisis among low-income African-Americans, particularly women. And in sub-Saharan Africa, the virus killed more than 1.6 million people in 2007 alone. Innovative research approaches could lead to new treatments and possibly a cure for AIDS. HIV/AIDS has been described as a disease of poverty. Individuals with poor access to health care are less likely to see a doctor early on in their HIV infection, and thus they may be more likely to transmit the infection. HIV is now the leading cause of death for African American women between 24 and 35 years old.

For patients who have access to drugs, infection with the virus has ceased to be a death sentence. In 1995, combinations of drugs called highly active anti-retroviral therapy (HAART) were developed. For some patients, drugs can reduce the amount of virus to undetectable levels. But some amount of virus always hides in the body's immune cells and attacks again if the patient stops taking his or her medication. Researchers are working on developing a drug to wipe out this hidden virus, which could mean the end of AIDS.