The human brain. The "control center." What does it control?

Practically everything. From breathing and heartbeat to reasoning, memory, and language. And it is the main part of the central nervous system. This diagram shows the components of the central nervous system.

The brain is the most complex organ of the human body and the control center of the nervous system. It contains an astonishing 100 billion neurons! The brain controls such mental processes as reasoning, imagination, memory, and language. It also interprets information from the senses. In addition, it controls basic physical processes such as breathing and heartbeat.

The brain has three major parts: the cerebrum, cerebellum, and brain stem. These parts are shown in Figure below and described in this section. 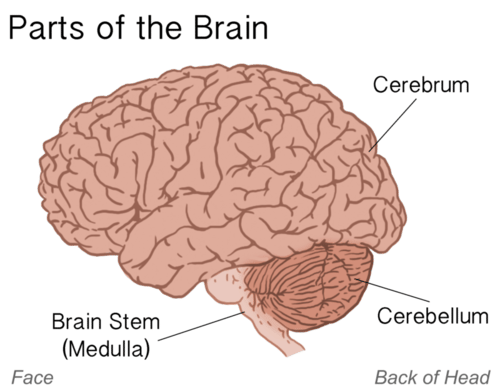 In this drawing, assume you are looking at the left side of the head. This is how the brain would appear if you could look underneath the skull. Each hemisphere of the cerebrum consists of four parts, called lobes. Each lobe is associated with particular brain functions. Just one function of each lobe is listed here.

The smartest people in the world have spent millions of dollars on developing high-tech robots. But even though technology has come a long way, these humanoid robots are nowhere close to having the "brain" and motor control of a human. Why is that? Learn about the motor control processes in the human brain, and how cutting-edge research is trying to implement it in robots below.