Running. A means of terrestrial locomotion allowing humans and other animals to move rapidly on foot. The knees, which connect one part of the leg to the other, have to allow the legs to move. The knee is a joint, the part of the skeletal system that connects bones.

A joint is a place where two or more bones of the skeleton meet. With the help of muscles, joints work like mechanical levers, allowing the body to move with relatively little force. The surfaces of bones at joints are covered with a smooth layer of cartilage that reduces friction at the points of contact between the bones.

There are three main types of joints: immovable, partly movable, and movable.

Movable joints are also known as synovial joints. This is because the space between the bones is filled with a thick fluid, called synovial fluid, that cushions the joint (see Figure below). 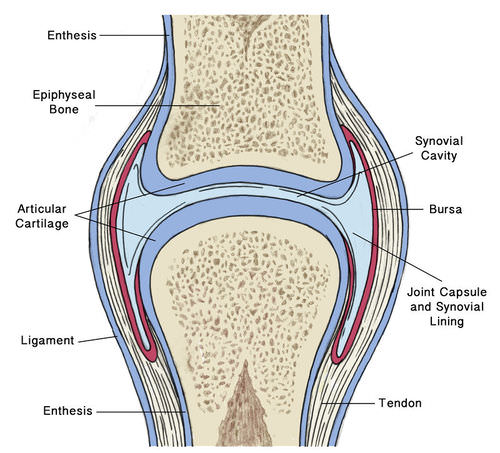 A movable, or synovial, joint is protected and cushioned by cartilage and synovial fluid.

There are a variety of types of movable joints, which are illustrated in Figure below. The joints are classified by how they move. For example, a ball-and-socket joint, such as the shoulder, has the greatest range of motion, allowing movement in several directions. Other movable joints, including hinge joints such as the knee, allow less movement. Types of Movable Joints in the Human Skeleton. Movable joints can move in a variety of ways. Try moving each of the joints indicated in the diagram. Can you tell how their movements differ? Other joints in the human skeleton that are not depicted here include saddle, ellipsoid, and plane joints.