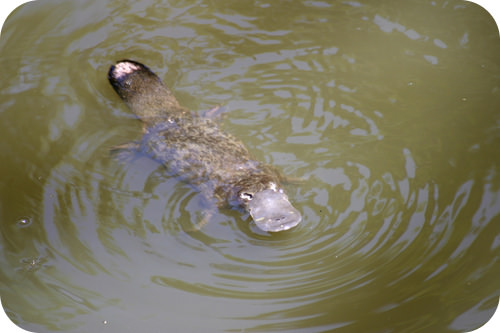 Could you argue that the duckbilled platypus has some characteristics of other species?

Like a bird or a fish? You could. This might suggest that an ancestor of this species may have been one of the early mammals to evolve.

The earliest mammals evolved from cynodonts. But the evolution of mammals didn’t end there. Mammals continued to evolve. Monotreme mammals probably split off from other mammals first. They were followed by marsupials. Placental mammals probably evolved last.

The first monotremes may have evolved about 150 million years ago. Early monotreme fossils have been found in Australia. An example is a genus called Steropodon, shown in Figure below. It may have been the ancestor of the platypus. Early monotremes retained some of the traits of their therapsid ancestors. For example, they laid eggs and had a cloaca. These traits are still found in modern monotremes. Probable Monotreme Ancestor: Steropodon. Like the platypus, Steropodon probably had a bill.

The first marsupials may have evolved about 130 million years ago. One of the earliest was the extinct genus Sinodelphys. A fossil of this mammal is shown in. It is a remarkable fossil find. It represents a nearly complete animal. Even tufts of hair and imprints of soft tissues were preserved.

Sinodelphys was about 15 centimeters (6 inches) long. Its limb structure suggests that it was a climbing animal. It could escape from predators by climbing into trees. It probably lived on a diet of insects and worms.