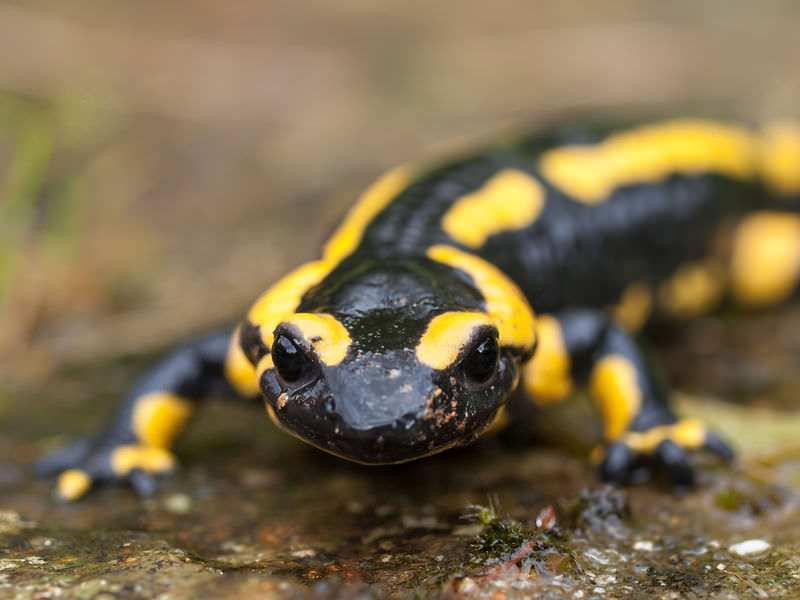 Look closely at the face of this salamander. It is strikingly similar to that of a frog or toad. As the first vertebrates to evolve from life in the sea to life on land, amphibians share a number of important evolutionary adaptations.

There are about 6,200 known species of living amphibians. They are placed in three different orders:

One feature that distinguishes frogs and toads from other amphibians is lack of a tail in adulthood. Frogs and toads also have much longer back legs than other amphibians. Their back legs are modified for jumping. Frogs can jump up to 20 times their own body length. That’s the same as you jumping at least 100 feet, or more than the length of a basketball court. Think how fast you could move if you could travel that far on one jump!

Frogs and toads are closely related, but they differ in several ways. Generally, frogs spend more time in water, and toads spend more time on land. As you can see from Figure below, frogs also have smoother, moister skin than toads, as well as longer hind legs. Frog and Toad. Frogs (a) and toads (b) are placed in the same amphibian order. What traits do they share?

Unlike frogs and toads, salamanders and newts keep their tails as adults (see Figure below). They also have a long body with short legs, and all their legs are about the same length. This is because they are adapted for walking and swimming rather than jumping. An unusual characteristic of salamanders is their ability to regenerate, or regrow, legs that have been lost to predators.

Salamander and Newt. Salamanders and newts can walk or swim. Salamander on a leaf (left), newt swimming in the water (right).

Caecilians are most closely related to salamanders. As you can see from Figure below, they have a long, worm-like body without legs. Caecilians evolved from a tetrapod ancestor, but they lost their legs during the course of their evolution. 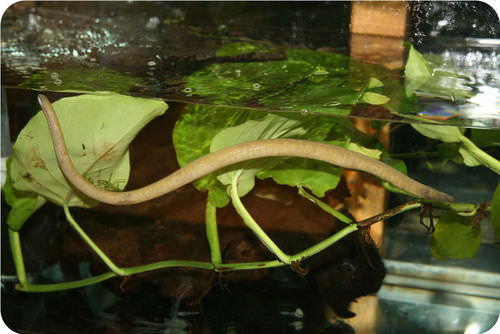 Swimming Caecilian. Caecilians are the only amphibians without legs.