How many different types of beetles are there?

There are about 350,000 species of beetles spread all over the world. But let's focus on this one. Look at the detail on this Rhinoceros beetle. The horns are used in fighting other males during mating season, and for digging. The body of an adult rhino beetle is covered by a thick exoskeleton. A pair of thick wings lay atop another set of wings underneath, allowing the rhinoceros beetle to fly. Compare those evolutionary adaptations to a simple sponge, and the evolutionary significance of invertebrates becomes obvious.

Invertebrates evolved several important traits before vertebrates even appeared. These traits are now found in just about all animals.

The first animal trait to evolve was multicellularity. This was highly adaptive. Multiple cells could do different jobs. They could evolve special adaptations that allowed them to do their job really well. However, the first invertebrates still lacked tissues. Sponges represent the first organism at the multicellular stage of invertebrate evolution.

Symmetry in Invertebrates. Sponges lack symmetry. Radial symmetry evolved first. This was followed by bilateral symmetry. How do the two types of symmetry differ?

The coral polyp in Figure above has radial symmetry. This was the first type of symmetry to evolve. The coral has a distinct top and bottom but not distinct ends. It can be divided into identical halves like a pie, but not into right and left halves. Animals with radial symmetry have no sense of directions such as forward and backward or left and right. This makes controlled movement in these directions impossible.

Flatworms represent the next stage of invertebrate evolution. They evolved cephalization.This is the concentration of nerve tissue at one end of the body, forming a head region. This is highly adaptive. It allows central control of the entire organism. Cephalization was first step in the evolution of a brain.

An outcome of cephalization was bilateral symmetry. This is demonstrated by the beetle in Figure above. With concentrated nerve tissue at the head but not at the tail end, the two ends of the body are distinct from each other. The animal can be divided down the middle to form identical right and left halves. It allows the animal to tell front from back and left from right. This is needed for controlled movements in these directions.

Ancestors of flatworms also evolved mesoderm. This is a third layer of cells between the ectoderm and the endoderm (see Figure below). Evolution of this new cell layer allowed animals to develop new types of tissues, such as muscle. 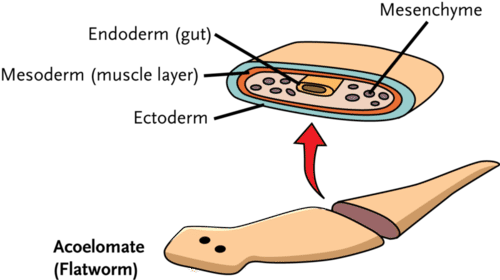 Three Cell Layers in a Flatworm. A flatworm has three cell layers.

Early invertebrates had an incomplete digestive system. There was just one opening for the mouth and anus. Ancestors of modern roundworms were the first animals to evolve acomplete digestive system. With a separate mouth and anus, food could move through the body in just one direction. This made digestion more efficient. An animal could keep eating while digesting food and getting rid of waste. Different parts of the digestive tract could also become specialized for different digestive functions. This led to the evolution of digestive organs.

Ancestors of roundworms also evolved a pseudocoelom. This is a partial body cavity that is filled with fluid. It allows room for internal organs to develop. The fluid also cushions the internal organs. The pressure of the fluid within the cavity provides stiffness. It gives the body internal support, forming a hydrostatic skeleton. It explains why roundworms are round and flatworms are flat. Later, a true coelom evolved. This is a fluid-filled body cavity, completely enclosed by mesoderm. It lies between the digestive cavity and body wall (see Figure below). Invertebrates with a true coelom include mollusks and annelids. Cross Section of an Invertebrate with a Coelom. The coelom forms within the mesoderm.

Segmentation evolved next. This is a division of the body into multiple segments. Both the earthworm and ant pictured in Figure below have segmented bodies. This trait increases flexibility. It permits a wider range of motion. All annelids and arthropods are segmented. Arthropods also evolved jointed appendages. For example, they evolved jointed legs for walking and “feelers” (antennae) for sensing. Notochord. A sea squirt is an invertebrate with a notochord.