What is so special about this particular plant?

Look at this plant. You could say it has some interesting fruit. Some might say the fruit does not even look that tasty. However, this is a cacao tree, and its seeds are the source of chocolate. So, there are some people who would argue that this is one of the most important plants in the whole plant kingdom.

The Importance of Plants

The importance of plants to humans and just about all other life on Earth is staggering. Life as we know it would not be possible without plants. Why are plants so important? Red-eyed tree frogs like this one live in banana trees.

We obviously can’t live without plants, but sometimes they cause us problems. Many plants are weeds. Weeds are plants that grow where people don’t want them, such as gardens and lawns. They take up space and use resources, hindering the growth of more desirable plants. People often introduce plants to new habitats where they lack natural predators and parasites. The introduced plants may spread rapidly and drive out native plants. Many plants produce pollen, which can cause allergies. Plants may also produce toxins that harm human health (see Figure below). 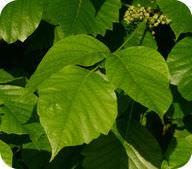 Poison ivy causes allergic skin rashes. It’s easy to recognize the plant by its arrangement of leaves in groups of three. That’s the origin of the old saying, “leaves of three, leave it be.”

Members of the plant kingdom play many crucial and sometimes surprising roles in the drama of life on Earth. You are probably familiar with some reasons plants are important. Why should you understand how plants live? Because plants play many roles, including but certainly not limited to: